The U.S. Coast Guard and steamship authority said the ferry Iyanough hit the jetty and grounded on the rocks at the Hyannis Harbor entrance around 10 p.m. Friday. It serves a 26-mile (42-kilometer) route between Nantucket and Hyannis.

The ferry is operated by the Woods Hole, Martha’s Vineyard and Nantucket Steamship Authority, connecting the Massachusetts islands with the mainland. It can hold up to 400 people.

Steamship Authority general manager Wayne Lamson said Saturday it’s still not clear what led to the crash and an investigation is underway. He said the seas were about 4 feet (1.2 meters), and the captain and the pilot may have had difficulty with the entrance to Hyannis in the harbor channel.

The trip had been the last one of the night, Lamson said.

The authority had said in a statement that bad weather, strong winds and choppy seas are believed to have contributed to the grounding of the vessel.

There were 48 passengers, six crew members and three food service workers on board, according to the authority. Hyannis acting Fire Chief Dean Melanson said that a total of 18 people were injured. And of those, 15 people— 13 passengers, one crew member and one food service worker —were taken to the hospital. The other three underwent evaluations that did not require them to be hospitalized.

Melanson said the injuries included bumps and bruises, and one person had an asthma attack. But none of the injuries are considered life-threatening.

A Cape Cod Hospital spokeswoman said the injured had been treated and released by noon Saturday.

Lamson said the ferry was removed early Saturday morning and is currently at the authority’s dock in Hyannis. Temporary repairs are being made to the vessel.

The steamship authority has charted a vessel to fill in for the weekend and a different one for next week, Lamson said. 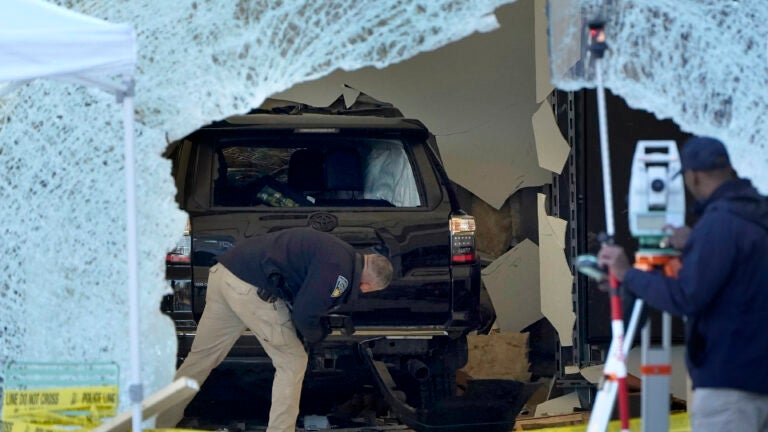 One dead, at least 19 injured after driver crashes into Hingham Apple store