More than 100 members of the striking Massachusetts Nurses Association made a symbolic effort to return to work at the Tufts Medical Center Thursday, but were rebuffed by security as the first nurses strike against a Boston hospital since 1986 turned into a lockout expected to last into Monday.

The nurses union launched a one-day strike around 7 a.m. Wednesday, setting up a picket line that drew hundreds of union members along with political figures to the sidewalk outside the hospital on Washington Street in Boston’s Chinatown section.

The union formally ended their strike around 7 a.m. Thursday. Led by Deb Sullivan, a union representative, and bargaining committee co-chairs Mary Havlicek Cornacchia and Barbara Tiller, more than 100 nurses crossed Washington Street chanting “we want to work’’ as they tried to enter the hospital.

Sullivan addressed Michael Crisp, the head of public safety for the hospital, “asking respectfully’’ to allow them to enter the hospital and start caring for patients again.

“We will welcome you back on Monday,’’ Crisp replied calmly.

After the brief, low-key, confrontation, Tiller waved a hand in the air and shouted “start walking,’’ leading nurses to resume their picketing, which the union promises will last until Monday at 7 a.m. when managers have said they will end the four day lockout.

Hospital administrators said the hospital has been functioning smoothly and without interruptions to patient care since the strike began. And, managers said in a statement, the move by union nurses to return to work Thursday is a publicity stunt staged to incite media coverage.

“Part of the MNA playbook is staging a dramatic scene the morning after a strike. This is a stunt orchestrated for the media,’’ Rhonda Mann, hospital spokeswoman said in a statement. “If the MNA was so concerned about our nurses returning to the bedside, it should never have taken them out on strike and away from their patients.’’

The strike came after about 15 months of talks failed to produce a new contract for nurses at Tufts, a 415-bed teaching hospital that treats children and adults. The union says it is seeking increases in pay and staffing levels, but both sides deadlocked over another key issue: retirement benefits.

The hospital wants nurses who still have pensions to move into defined-contribution plans, similar to 401(k)s, which would save the hospital money. The union has fought to keep the nurses’ pensions. 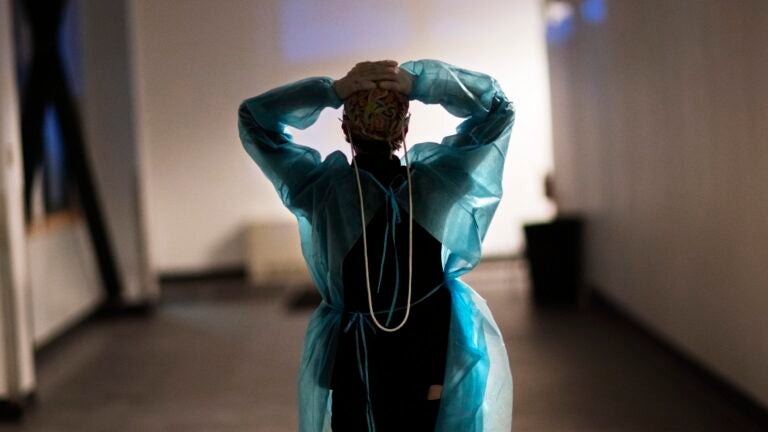 Will COVID surge in Greater Boston this winter? We asked the experts.