The unpredictability that Elise Wilson loved about working as an emergency room nurse turned into a nightmare last month. On the morning of June 14, the 65-year-old nurse at Harrington Hospital was tending to a patient when she said he suddenly stabbed her multiple times in the neck and arm.

Wilson, who has worked in the Southbridge hospital’s ER for the last 35 years of her more than 40-year career, said it was when she began working in the emergency room that she found her “niche,” drawn to how different each day was and the range of cases and patients who walked through the doors.

“You never really know if it’s going to be something mild like a sore throat or a rash or somebody who’s basically fighting for their life,” she said. “Or anything in between — newborns to geriatric patients. It’s just a conglomeration of absolutely everything.”

After the attack, Wilson, a Dudley resident, spent two weeks in the intensive care unit at UMass Memorial Medical Center in Worcester, which was followed by a stay in a rehabilitation center until mid-July. Now, she and her family are advocating for a bill, being referred to as “Elise’s Law,” that would require health care employers to develop and implement workplace violence prevention plans.

The man accused of stabbing her has pleaded not guilty to the charges against him, which include assault and battery with a dangerous weapon and armed assault with intent to murder. A court physician found he suffers from paranoid schizophrenia, according to MassLive. His attorney could not immediately be reached for comment. (Update: Attorney Jacqueline Dutton declined to comment on the case Thursday.)

Wilson recently spoke with Boston.com about the day she was attacked, her recovery, and why the proposed law is important.

The interview has been condensed and edited for clarity.

What happened on the day you were attacked?

That particular day, I had been assigned to triage. And in triage, it’s our job to assess the patient, get their vital signs, figure out what’s going on, and decide if it’s safe for them to wait or if they need to be brought in right away.

This young man came in, and he said he had pain in his wrist. I said, ‘OK, c’mon in this room, and I’ll get you set and then the doctor will see you when we’re done.’ So he did.

I was sitting there with him — I actually remember asking him the correct spelling of his name because his name was spelled in an unusual way. And he confirmed that, and we were having, I thought, a normal conversation. I asked him about his wrist, and he said he’d hurt it a few weeks ago and had come to the hospital but it was still bothering him.

I said, ‘OK, well let me get you set and the doctor will see you after this.’

He said, ‘OK,’ but when I was doing his blood pressure, I noticed that his eyes were wandering around the room and he had an odd look on his face. So I was thinking to myself at this point, ‘When I bring him inside the ER proper, I’m just going to tell whoever has him to keep an eye on this guy. There’s something up with him.’ He started to get a little antsy in the chair. I thought he was just getting anxious.

I wrote down what I had done so far, and I turned back to the interview seat where he was — and he wasn’t in the seat anymore.

I didn’t know if he had just run out of the room, although I didn’t hear him get up. So I turned around to look, and the next thing I knew he was standing in front of me. I was seated in a chair so I couldn’t get up. I couldn’t get away or anything.

The first thing he did was punch me right in the head. And when I turned my head back to look at him again, shocked that this all of a sudden happened, he was standing over me and he had a knife in his hand and it was raised over his head.

I started screaming for help. I started banging my shoes on the floor, trying to make as much noise as possible because where I was was a little isolated from people. There are other people in that corridor, but not always right there. I wasn’t sure who could hear me or how loud I was yelling. But somebody did hear me and sent the security guard in.

But before that happened, while I was yelling and screaming, he had stabbed me once already in the neck — on the right side of my neck. I put my left arm up in front of my face and neck to protect it, and I did feel one of the blows to my arm. I don’t recall feeling the other blows, but I guess I did have quite a few stab wounds in my arm.

I don’t remember the security officer coming in, but the attack suddenly stopped. And when it stopped, I went to get up and get out of there.

When I went to get up, my left arm just fell limp to my side. I couldn’t quite figure that out — what was going on. I lifted up my hand and I could literally see just a sheet of blood streaming out from my left arm.

I ran out into the corridor to bang on the doors to the ER, so somebody would let me in there. I had no idea how bad my arm wound was, but I was more worried about my neck at that point because I knew he had stabbed me in the neck. I got into the ER and went into the trauma room and laid on the bed and the doctors and nurses there started taking care of me. I don’t remember a heck of a lot after that because they kind of put me out and did a bunch of things and got me ready for lifeflight to take me to UMass.

What’s the next thing you really remember?

I remember waking up in the ICU. I couldn’t speak. It turns out I had been intubated and they put a tracheostomy in my throat. I was on a ventilator for a couple of days. I don’t remember too much about what they told me about my injuries because I’m pretty sure I was on a lot of medication. But what they ended up telling me was there was a pretty severe neck wound and I had a lot of swelling in my neck, which is why they had to do a tracheostomy — because they were afraid I would not have my airway. (A tracheostomy is a surgical hole made in the neck and windpipe to allow a person to breathe if their airway is blocked or impaired, according to the Mayo Clinic.) And he had completely severed my brachial artery, which is why I was bleeding so much, and two of the three nerves that help your arm function. They restored circulation to my arm and reattached the nerves, but they said it was going to be a wait-and-see game to see how much function I would get back in that left arm.

How did you feel being the one that was being treated and taken care of, being on the opposite side of the situation that you might have been on working in the ER?

That was very difficult for me. As a matter of fact, I kept saying that over and over, especially to the ICU nurses who basically had to do all of my care because I couldn’t do anything on my own at all there. I couldn’t even stand up for over a week. I had a little white board I could write on because I couldn’t speak, and I would just indicate to them that this was very hard for me. But I was very grateful. They were awesome to me. They treated me just like I was one of their own, like they had known me for years. They were very, very good to me.

It was so hard to be on that side of it. I’m used to being in control, I’m used to being the one who’s figuring out the situation, not the one that’s lying there having people decide the things for me. It was very difficult for me to be the dependant one. 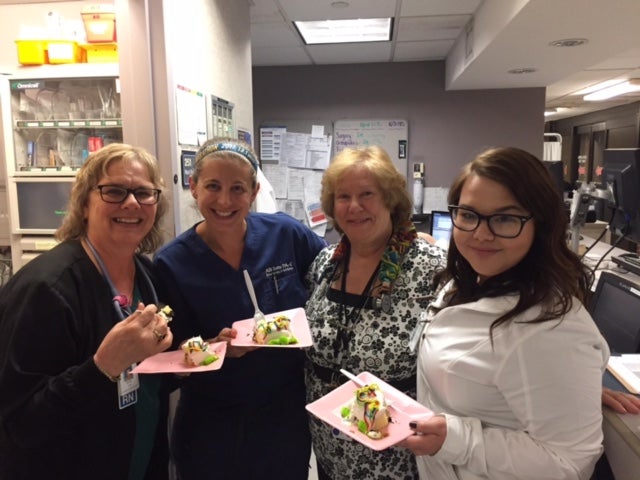 Elise Wilson, far left, was working her shift at Harrington Hospital when she was stabbed by a patient.

If you end up being in a position where you could return and work as a nurse, would you want to?

I have to worry about the function of [my arm]. You have to be 100 percent capable to work in an emergency room. I wouldn’t be afraid of going back. I think I’m mentally OK — that I would be able to do it. I really miss the people that I worked with, and they were the first ones on the scene to start to save my life. I really do miss that — I miss my people. I miss doing my job. Because I really did like it.

Have you ever encountered violence or been attacked on the job before?

Unfortunately this happens to ER nurses all the time. We, over the past 10 years or so, have been getting more and more substance abuse patients in the emergency room, mental illness patients in the emergency room. Patients who are just intoxicated. We’ve been spit on. We’ve been shoved and kicked. Most times it’s very minimal. Or most times, it’s the way they come in, so we know. We stay out of arm’s reach, and we have security officers that will help us out. But it’s very risky nowadays because people are so unpredictable. That’s the thing — I had no idea that this was going to happen. He didn’t come in angry. He didn’t come in yelling — nothing that would have set up a red flag for me until it was too late.

How do you feel about the bill proposed in your name?

This proposal needs to happen. I’m sure you can’t prevent every injury from ever happening ever, but more safety features need to be put into place. Facilities need to evaluate risks and who’s at most risk and see what they can do to minimize those risks. They can’t erase them, nobody can do that. But risk can be minimized. I know that the hospital that I work at has already instituted several different things. The first thing they did was they started using the safety wands like they do at the airport on all patients and visitors that come in. And we have since had metal detectors installed at the entrances to the emergency room. My nurse friends who work there tell me they have also issued panic buttons on breakaway lanyards that they can wear on their necks. 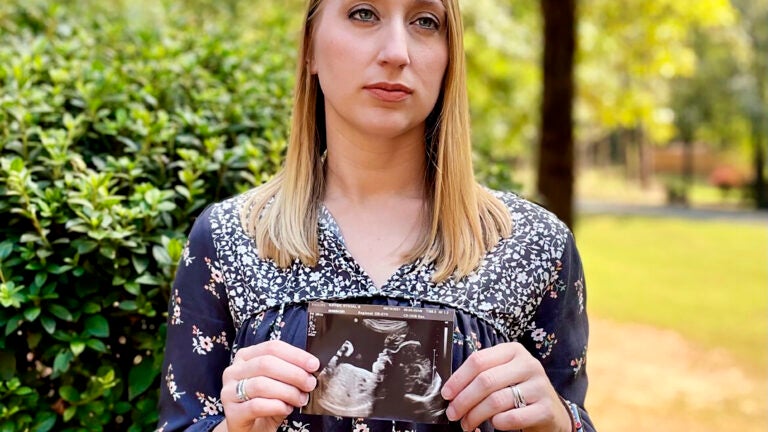