An 8-year-old boy who was underwater about 24 minutes before he was pulled from a capsized boat in Wareham last week died Saturday at Boston Children’s Hospital, according to officials.

“Nothing compares to the grief and sadness of losing a child,’’ Wilson said in the e-mail. “While the family is the most impacted, many others share in the profound sadness of this tragic event.’’

Wilson extended sympathies to Harry’s parents, Laura and Paudie, and his siblings, Ellen, Charlie, and Joe.

“The O’Connor family would like to thank the community for their support which has been a huge comfort to them at this difficult time,’’ Wilson said.

The O’Connors could not be reached for comment Sunday.

In her e-mail, Wilson included hyperlinks to resources for mental health referrals, urgent psychiatric care, and articles on childhood grief. Counselors will be at Nixon Elementary School and at Curtis Middle School on Monday between 1 and 3 p.m., Wilson said.

Beth Stone, a spokeswoman for the Plymouth district attorney’s office, confirmed the child’s death Sunday and said the boating incident remains under investigation. Phone and e-mail messages left for the Massachusetts Environmental Police, who were involved in the incident, were not returned.

Harry and his family were on a motorboat in the mouth of the Cape Cod Canal Wednesday afternoon when it capsized, dumping 12 people, including Harry, into choppy waters.

A crew member aboard a nearby sailboat, Disco Volante, sent out a mayday call: “There appear to be 11 people in the water. One child is missing, submerged under the boat.’’

That child was Harry, who remained trapped beneath the vessel even as other boaters were pulled from the water. The Disco Volante crew rescued nine; local authorities retrieved two others. Among the rescued were Harry’s parents, who were clinging to the top of the capsized boat; they screamed that their child was still in the water, trapped beneath.

Commercial diver Michael Margulis, 56, was inspecting a mooring in nearby Sippican Harbor when he heard the mayday call on marine channel 16. He raced his 21-foot motorboat, Island Time, toward the mouth of the canal.

An initial rescue attempt by Lieutenant Matthew Bass of the Massachusetts Environmental Police proved unsuccessful. With the water churning and the vessel sinking, he couldn’t get underneath. Adam Murphy, Marion’s deputy harbormaster, tried and failed to flip the boat with a rope.

Margulis, who has around 40 years of diving experience, dove into the water. For four minutes, he searched beneath the churning waves, pushing aside objects: a pool noodle, a shoe, an empty life jacket.

He finally found Harry wrapped inside his life jacket, unconscious. The flotational device had apparently pinned him to the floor of the boat. The boy had been underwater for around 24 minutes, authorities speculated Wednesday.

Once the boy was ashore, Bass and Murphy pumped his chest. Harry was transported to Tobey Hospital in Wareham, then flown to Boston Children’s Hospital, where he died three days later.

Upon learning of the child’s death on Sunday, Margulis, his rescuer, said he did not want to comment. 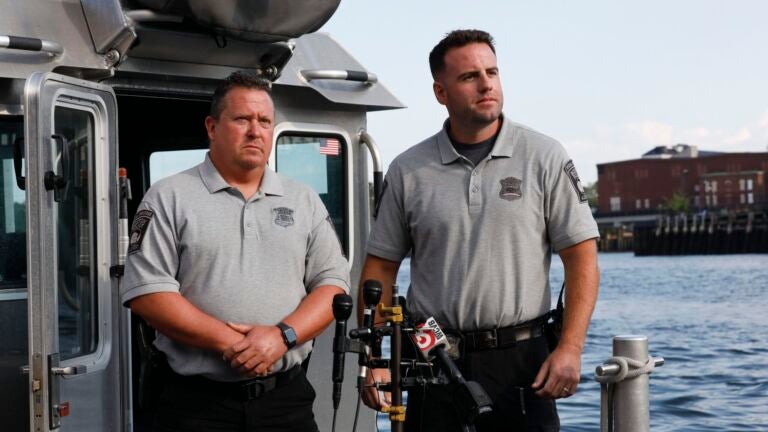