The tragic story of the father who died after being stung in Foxborough produced one after another of alarming — yet likely inaccurate — headlines.

In one way or another, the stories attributed 48-year-old Eric Dahl’s death to a swarm of bees. It’s still unclear how the stings triggered Dahl’s death, but one thing seems likely: They probably weren’t from bees.

“It’s a really sad story, but there’s a lot of misinformation that can have a bad impact on bees,” Noah Wilson-Rich, a local bee expert and founder of Boston-based Best Bees, told Boston.com.

For a myriad reasons, Wilson-Rich explained how the nest Dahl apparently came across while blowing leaves in his backyard was almost certainly yellow jacket wasps.

For starters, Dahl’s father-in-law said as much in an interview with Boston 25 News.

“The yellow jackets in the ground — all you see is a hole,” Harry Romsey told the station.

The nest is another clue.

“When they do happen they don’t attack people,” he said.

Late summer happens to be peak season for wasps and hornets, as a local pest control manager told the local NBC affiliate in Providence this week.

“The yellow jacket, particularly this time of year, the nests are at peak size right now, and they are very aggressive,” Tony De Jesus told WJAR. “It’s more common than people realize. You have to be careful this time of year if cutting your lawn or working in your yard.”

Wilson-Rich says one reason that yellow jackets are more aggressive is that while bees are vegan — relying on flower pollen and nectar as their two sole food sources — wasps are carnivorous “hunters” and are known for scavenging for human food.

Furthermore, yellow jackets can sting repeatedly, while bees die after stinging once and are thus less motivated to attack, according to Wilson-Rich.

“Yellow jacket venom is also stronger than honey bees, which can explain why someone had a fatal reaction,” he said.

How can stings be fatal?

According to the Centers of Disease Control and Prevention, of the thousands of people stung by insects each year, as many as 90 to 100 people in the United States die as a result of allergic reactions.

“This number may be underreported as deaths may be mistakenly diagnosed as heart attacks or sunstrokes or may be attributed to other causes,” the center says on its website.

However, Dahl’s family members say he wasn’t allergic, since he had been stung before and had no reaction.

Wilson-Rich says it’s possible that a swarm of overwhelming stings could send one’s body into shock, which could “certainly” trigger a heart attack, even if fatal allergic reactions are more typical.

“Everyone’s body works differently. Venom would trigger all sorts of inflammatory responses in tissues,” including the heart’s connective tissues, he said.

What should those worried about being stung know?

Roughly three in 100 adults are estimated to have a venom allergy, and doctors say it would be impractical to do preemptive screening. An even smaller percentage suffer severe reactions. So what should people alarmed by the rare headline-making tragedies do?

The good news is that it’s “nearly impossible” to die from being stung for the first time, though allergies can remain dormant and allergic reactions can be triggered upon later stings.

Wilson-Rich says those who know they have the rare allergy should carry a prescribed Epi-pen. For those who don’t know if they have an allergy, there are two types of sting reactions to look for: Local and systemic.

“Nearly everyone has a local reaction,” he said, which can include pain and swelling in the area of the sting.

Systemic allergic reactions are very rare, but consist of symptoms on the body away from the sting site, such as shortness of breath, skin rashes, or increased heart rates.

Wilson-Rich encourages anyone concerned about being stung or how to deal with a wasp nest to contact his organization for more information.

“Bees, wasps, hornets, all these things are in our environment,” he said. “They should feel welcome to reach out.” 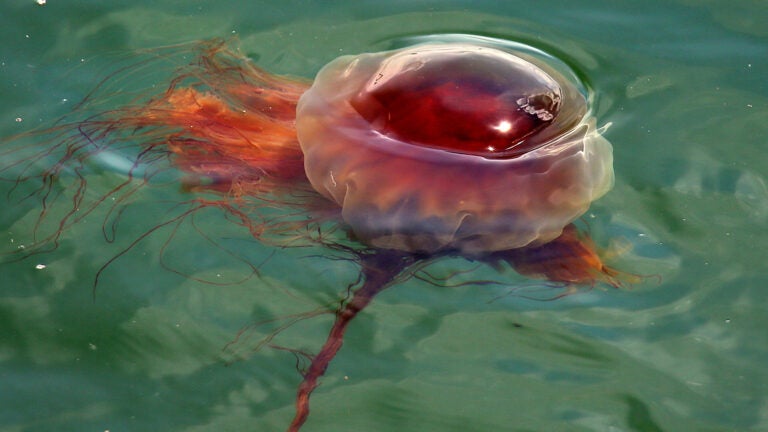