BOSTON (AP) — For nearly a century, the National Braille Press has churned out millions of pages of Braille books and magazines a year, providing a window on the world for generations of blind people.

But as it turns 90 this year, the Boston-based printing press and other advocates of the tactile writing system are wrestling with how to address record low Braille literacy.

Roughly 13 percent of U.S. blind students were considered Braille readers in a 2016 survey by the American Printing House for the Blind, another major Braille publisher, located in Louisville, Kentucky. That number has steadily dropped from around 30 percent in 1974, the first year the organization started asking the question.

“Think Kindle for the blind,” Mac Donald said as he showed off the portable machine — which has an eight-button keyboard for typing in Braille as well as a refreshable, tactile display for reading along in Braille — during a recent tour of the press’ headquarters near Northeastern University. 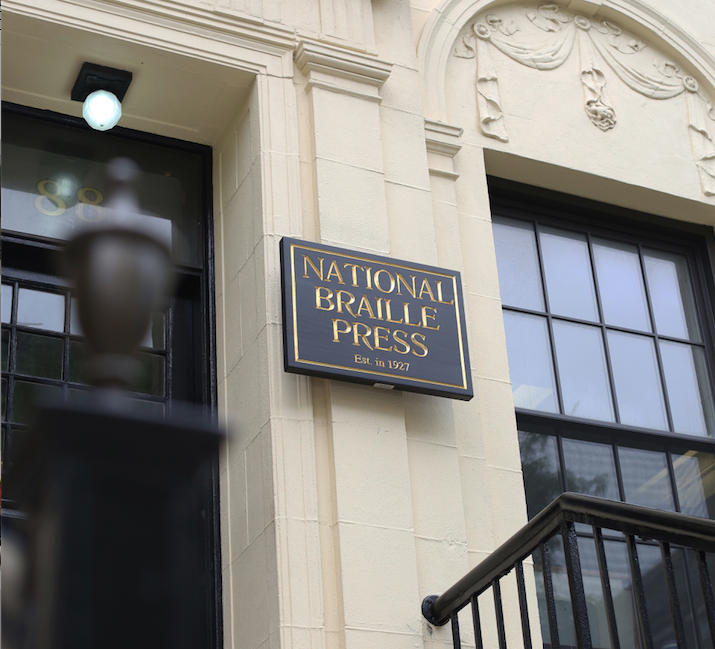 The National Braille Press is on St. Stephen Street near Northeastern University.

The venerable press, which started as a Boston newspaper for the blind in 1927, has also looked beyond printing Braille versions of popular books and magazine titles.

“Braille isn’t dead by any means,” he said. “But it needs technology to adapt and evolve.”

Waning interest in Braille has been a challenge since the 1970s, when school districts started de-emphasizing it in favor of audio learning and other teaching methods, said Chris Danielsen, spokesman for the National Federation of the Blind in Baltimore.

New technology has allowed people with visual impairments to live more independently than ever, but they’re also playing a role in eroding Braille’s prominence, said Cory Kadlik, a 26-year-old Massachusetts native who lost his sight as an infant.

Kadlik said he is “not the strongest Braille reader,” in large part because of what technology allows him to accomplish.

Computer software reads aloud emails and other digital documents for him, and his smartphone helps him complete everyday tasks like sorting the mail.

“I have an application that can read the print on the envelope to me,” said Kadlik, a technology specialist at the Braille & Talking Book Library in Watertown, part of the Perkins School for the Blind, the nation’s oldest such school, where Helen Keller was educated. “That’s crazy. That’s unheard of.”

But while technology has opened up a new world not dependent on Braille, it also presents its best chance at survival, said Kim Charlson, the library’s director.

Electronic Braille computers allow users to digitally store hundreds of Braille materials that would otherwise be large and unwieldy in print, not to mention access the internet and complete other computer-based tasks in Braille.

Such machines have been around for years, but their average cost of $4,000 to $5,000 has so far kept them out of reach for most, says Charlson.

That is starting to change. The Perkins Library, for example, will soon start loaning out 200 devices that normally retail for about $475, and the National Braille Press’ Braille computer costs $2,495.

“Technology is the key to making Braille more relevant by getting it into the hands of more people,” said Charlson, who began losing her vision as a child and is now totally blind.

Another key is overcoming perceptions that Braille is hard to learn and inefficient to use, said Joseph Quintanilla, the vice president of development at the National Braille Press.

Quintanilla, who has been legally blind since age five, said he regrets shunning Braille growing up. He started to appreciate its role in imparting crucial grammar and communication skills only when he entered the working world and had to play catch up.

“I don’t think we would ask sighted people to go through life without reading,” Quintanilla said. “So we shouldn’t do that for blind people.”

Follow Philip Marcelo at twitter.com/philmarcelo. His work can be found at https://www.apnews.com/search/philip_marcelo.

Support from some, scorn from others: Here's the latest on the Boston School Committee text controversy