She woke up naked and unnerved. Her professor, her mentor at Berklee College of Music, was groping her as she tried to push him away while fighting off waves of nausea. Jeff Galindo, a popular jazz musician and instructor at the school, had walked her home from a party the night before to make sure she arrived safely because she was so drunk.

All she wanted was to banish memories of that nightmarish experience in the spring of 2012. But weeks later Galindo, who had been on tour much of the time since that night, begged forgiveness from his student in a series of bizarre texts.

“I’m truly sorry for hurting you. I promise I will never again,’’ Galindo said in texts shared with the Globe by the woman, then a junior and one of the few female students in her department. “By the way, just to let you know, we never [had intercourse],’’ said another text in the mea culpa. “I never got it up. I was too drunk. It doesn’t excuse anything, but I thought I’d let you know what a loser I am.’’

A Globe investigation has uncovered a culture of blatant sexual harassment at Berklee with at least three male professors, including Galindo, allowed to quietly leave since 2008, after students reported being assaulted, groped, or pressured into sex with their teachers, according to court documents and interviews with more than a dozen people. Administrators at the renowned music school tolerated lecherous behavior, former Berklee students and employees said, and often silenced the accusers through financial settlements with gag orders attached.

Berklee administrators defended the school’s track record, saying in a statement that Berklee has rigorous policies and procedures to deal with claims of sexual harassment.

“Although we do not discuss specific matters publicly out of respect for all involved and limitations on what we are legally permitted to share, we take matters that impede the learning or working environment of our students, faculty, and staff seriously and act promptly to address them,’’ the school said.

The allegations against the Berklee professors come at a time of heightened attention to sexual harassment following revelations about Hollywood producer Harvey Weinstein, who faces accusations of groping, raping, and harassing women for decades. Since the scandal became public last month, women have felt empowered to speak up about alleged abuse, especially when they believe their abusers remain free to victimize others.

The woman who reported being assaulted by Galindo said that when she initially spoke with Berklee administrators in 2012, they discouraged her from pressing forward with a court case because, she said, they assured her Galindo would never work at another school.

Yet Galindo went on to teach at the New England Conservatory in Boston. The woman, who asked to remain anonymous because she fears professional reprisals, was horrified to discover in 2016 that Galindo was teaching again and notified the conservatory. His contract there was not renewed, according to the school. But he continued working at the Longy School of Music of Bard College in Cambridge until last week, when the woman found out he was employed there, contacted administrators, and the school severed ties with him. Galindo had worked there since 2009.

“If I didn’t report him [to other schools], it would be on me if he did this again,’’ the woman said.

Still, Galindo has continued teaching. He is listed as a part-time faculty member at the Rivers School, a college prep school in Weston. Christine Martin, a Rivers spokeswoman, said Tuesday that Galindo has been affiliated with the school since 2015, and that he arrived with positive references. She was unable to say who had provided those references.

Berklee, in a statement, said one institution requested a reference regarding Galindo and “we provided the termination letter which included an explicit statement that explained the reasons for his departure from the college.’’ A Berklee spokesman declined to say when that correspondence happened or which institution requested the information.

Galindo did not return calls and text messages from the Globe seeking comment.

But another former Berklee professor accused of sexual misconduct, prominent jazz saxophonist Greg Osby, did speak with the Globe. A woman accused Osby in 2012 of pressuring her to have sex while she was a student at Berklee. The woman, who also asked to remain anonymous, had graduated several years earlier and established a successful music career, but later reported him to Berklee administrators after growing concerned he might still be preying on students.

“I could not bear the feeling that I had a responsibility to do something about this,’’ said the woman about her decision to finally contact Berklee.

Osby, in an hourlong interview with the Globe, disputed the woman’s claims. He also said that he received a severance package from Berklee that included a gag order.

“Only an idiot would sleep with students, and I am not an idiot,’’ Osby said. “I would not do that. But after they graduate, it’s open season.’’

Osby said Berklee did not give him a chance to defend himself against the claims, but he decided not to contest the charges because he was burned out teaching there.

“Bottom line is, and this is a bit harsh, if anyone saw my girlfriend at that time and saw [his Berklee accuser] that would probably end the argument,’’ Osby said. “Why would I jeopardize my career for somebody like that?’’

The statement issued by Berklee said the school is committed to a “fair and thorough process for both complainant and respondent,’’ and that not every case leads to a finding.

“As evidenced by our past practices, where an investigation reveals a serious violation of our sexual misconduct policy, we act swiftly and decisively to remove the individuals from our community,’’ Berklee said.

Yet a case filed earlier this year with the Massachusetts Commission Against Discrimination, or MCAD, raises questions about Berklee’s commitment to address the issue.

A 2012 Berklee grad who was hired to run the school’s audio production lab, accused a male co-worker of predatory behavior, according to a complaint she filed with MCAD in January. She described unwanted sexual advances by her co-worker toward female students in the lab in mid-2015 and then retaliation against her — leaving condoms in the lab and suggesting sexual liaisons — when she reported his behavior to their boss. But Berklee administrators waited weeks to act, and then failed to monitor the co-worker, who repeatedly violated an order they issued for him to stay away from her, the complaint states.

The woman also accused Berklee of brushing off her concerns about inappropriate sexual behavior by a professor in the school’s music production department last year.

She “continued to observe and experience a pattern, practice, and pervasive culture of tolerance of sexual harassment at Berklee,’’ according to the MCAD complaint.

Berklee settled the case in April, and that settlement is sealed, too. The woman, and her attorney, North Reading lawyer John W. Davis, declined to comment.

The former student who accused Galindo of assaulting her when she was too drunk to fend him off said she worked up the nerve to report him to Berklee administrators about six months later. He was let go shortly after. There was no notice to students, no apology to the woman, and no financial settlement.

The woman, who was receiving a partial scholarship, said she was afraid even to apply for additional financial aid from Berklee after she reported the assault because Galindo accused her of concocting the story to gain more scholarship money.

“I wanted to be believed so bad,’ the woman said. “I thought if I ever said anything about money, no one would ever believe me.’’

Instead, she sought and received private therapy, paid for by Berklee, to help her deal with the trauma. She showed the Globe e-mails from Angela F. F. Davis, then Berklee’s associate dean of students, authorizing these payments.

One of her former professors, Tom Plsek, now chair emeritus of the brass department at Berklee, also confirms the woman’s story.

Plsek retired as department chair in 2013 but still teaches a few courses.

His wife, Stephany Tiernan, a professor and chair emerita of the school’s piano department, has also borne witness to sexual harassment allegations. In one case, a freshman alleged her keyboarding professor, Aruan Ortiz, decided she needed more help with her technique and phoned her late one evening in February 2008, asking to come over to her apartment and offer instructions.

The woman had a friend staying with her and “therefore felt safe, and otherwise did not wish to refuse assistance from an instructor,’’ so she agreed, according to a 2009 lawsuit filed in US District Court in Boston.

But that instruction quickly turned sour, as soon as the woman’s friend left the room, the suit states, with Ortiz licking the woman, grabbing her, and repeatedly attempting to kiss her. The woman freed herself and ran to her friend in the bathroom.

Ortiz then acted as if nothing happened but repeated the behavior as the woman walked him to the door and asked him to leave, according to the lawsuit.

She went home to Ohio to tell her parents, but came back a week later only to find a voice message from Ortiz asking her if she was free that evening. That’s when the woman reported his behavior to Berklee administrators. They waited two weeks to start investigating — and only after two of the woman’s instructors urged them to act, according to the lawsuit. It took another two months for Berklee to hold a meeting with Ortiz and the student to review the allegations. Tiernan, who attended that meeting, according to the lawsuit, declined to comment for this story.

In that meeting, Ortiz admitted to grabbing the woman’s face, attempting to kiss her, and blowing in her ear. He claimed “it was simply part of his [Cuban] culture,’’ according to the lawsuit.

It would take Berklee another two weeks — after classes had ended for the semester — to inform the woman Ortiz would no longer be teaching at Berklee. The lawsuit, which alleged civil rights violations, and assault and battery, was settled in 2010. The woman, citing a gag order on the settlement, declined to comment. So did her Boston attorney, Paul F. Wood.

But Woburn attorney David Fried, who initially represented Ortiz in the case, said in a statement to the Globe that a “single clumsy attempt at a kiss, although certainly improper from a teacher to student, was not ‘sexual harassment’ within the meaning of any relevant statute.’’

Fried said that Ortiz hired him because Berklee’s insurance company initially declined to represent him.

“Eventually they stepped up to the plate, probably because they wanted to settle the whole thing, and I withdrew in their favor,’’ Fried said. The case was then settled, with terms confidential.

The woman who reported Galindo’s alleged assault to Berklee said it took her several years to come to terms with what happened. She is now in her late 20s and a full-time musician.

“I came to a point where I could let this ruin my career or just move on,’’ she said.

But there is one constant reminder of that dark experience — her school loans for tuition at Berklee.

“I got [screwed] in every way and will be paying Berklee for the next seven years,’’ she said, but Galindo was allowed to walk away. 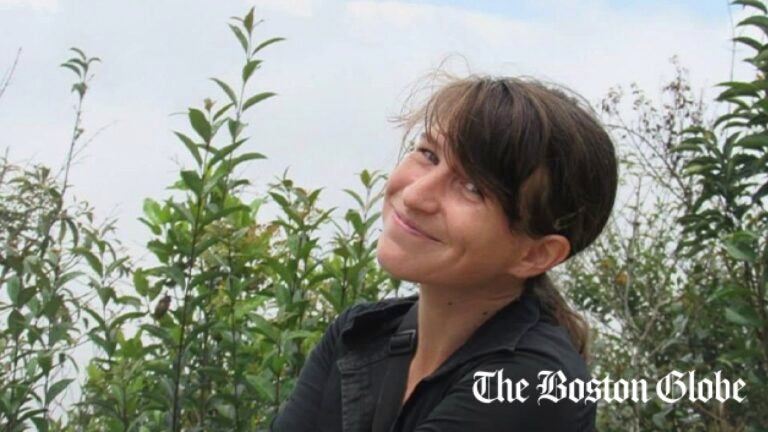 ‘A citizen of justice, a citizen of peace,’ Sabina Carlson Robillard dies at 34