Just a few feet from the heart of Medford Square and at the center of a long-held source of pride for the Boston suburb sits a historic plaque claiming to be the site where James Pierpont wrote the now-classic holiday song “Jingle Bells” more than 160 years ago.

The plaque, on the side of an optician’s office, asserts Pierpont wrote the song in 1850 inside what was then the Simpson Tavern, inspired by the boisterous sleigh rides that raced down Salem Street at the time.

But is it true? And should Medford even want ownership of a song that was written in a much different context than the one in which it is now celebrated?

Medford’s claim of the holiday song has long been contested. For decades, the city has been engaged in a simmering feud with Savannah, Georgia, that has featured dueling narratives and strongly-worded letters between the cities’ mayors over where Pierpont actually wrote the song. Savannah, where Pierpont later moved, copyrighted the song, and died, even has its own “Jingle Bells” plaque.

But regardless of where Pierpont actually sat down to write the song, whether Medford should stake such pride in “Jingle Bells” is up for debate.

“I stopped asking that question of where it was written,” said Hamill, who argues that it distracts from a more significant examination of the song.

Hamill, who has volunteered at the Medford Historical Society and Museum for nearly a decade, says she first started digging into the history of the song after fielding year after year of calls from reporters (like this one!) working on what had become an annual story come the holiday season. She discovered the story that she had been telling, based on the museum’s files, was actually all wrong.

First, Pierpont couldn’t have written the song in Medford in 1850 because he was in San Francisco at the time and wouldn’t return to Massachusetts for at least another year. In fact, as Hamill told The Boston Globe last year, “Jingle Bells” was most likely written in Boston, where Pierpont briefly lived upon his return — which leads to the second complicating aspect of the song’s history.

“It was first performed in this blackface minstrel hall in Boston in 1857,” Hamill said. Kyna Hamill, who recently published new research on the history of “Jingle Bells,” at the Medford Historical Society and Museum.

As Hamill wrote in a paper published this September in Cambridge University’s theater history journal, Theatre Survey, the story of “Jingle Bells” — originally titled “One Horse Open Sleigh” — is one in which “the racial history of the song has remained hidden behind its local and seasonal affection.” First performed on September 15, 1857, at the Washington Street minstrelsy, Ordway Hall, the song was one of many attempts by Pierpont to cash in on the racist entertainment that was popular at the time.

In the study, Hamill found that such onstage minstrel shows were part of a larger genre of satire at the time that “lampooned” black participation in wintry activities such as sleigh riding. The field often depicted black people “behaving foolishly, grotesquely, and incompetently.” Performances of “Jingle Bells” included stereotyped “dandy” characters that mockingly portrayed black people within Northern culture.

The song, however, has since “eluded its racialized past” and is “a prime example” of how some popular 19th century music’s “blackface and racist origins have been subtly and systematically removed from its history,” according to Hamill. It wasn’t until decades later that it became a Christmas song, much less the popular holiday anthem it is today. Upon the festive recitations of the song each season, there’s likely not much reflection upon its origins profiting off the racist caricatures of black people.

Nor is there likely to be much reflection upon its author. Pierpont, the derelict son of a prominent Boston abolitionist, wrote at least 13 songs for minstrel troupes in Boston and New York, among other attempts to make a quick buck. Following his first wife’s death, he quickly remarried and later abandoned his children in Massachusetts, moving to Savannah to start a new life. According to Hamill, he went on to enlist in the Confederate Army, for which he wrote fight songs.

But Hamill says she feels a bit more empathy toward the man she once characterized as “kind of a jerk.” An opportunist in the neutral sense, Pierpont’s various endeavors resulted from a life without much consistent solid ground or meaning, according Hamill. That said, she acknowledges that he also isn’t the celebrated songwriter that Medford holds him up to be.

“Everybody has their hometown heroes,” Hamill said, adding that such figures are often elevated or celebrated for narrow reasons.

“It’s just very common for local towns to find very particular aspects of history that they want to hold on to,” she said. “It becomes part of the city’s identity.”

The claim that Pierpont wrote “Jingle Bells” in Medford in 1850 comes from a 1946 Globe article about its history by Gladys Hoover. The article states that Pierpont wrote the song “one day in the 1850’s [sic].” Hamill theorizes the “s” got lost in the memorialization of the song.

The “Jingle Bells” plaque on 19 High St. in Medford does list a “Mrs. Otis Waterman” as a witness to Pierpont’s purported writing of the song in Simpson Tavern. But throughout her extensive research, Hamill says she has never found Waterman “in any other reference” to Pierpont’s life and is doubtful of the claim. She added that the plaque is among many not-always-accurate historical markers that were put up in Medford in the late-1980s.

“Some of them need a little bit of correcting,” she said.

“I think the society at the time was in a different place than it is right now,” Hamill continued. “It was really important for the people to stake these claims on all these particular people and places and give a narrative to the history.”

For some, it remains so.

In an interview with the Globe last year, Medford Mayor Stephanie Burke said she was aware of Hamill’s research, but stuck to the claim that it was written in the tavern.

“We take full ownership of it,” Burke said. “It’s got a long history, and we’re proud of it.”

Hamill says she thinks its time to revisit some of the popularly retold narratives and re-examine them with a bit more energy.

“This story only gets attention in the month of December every year,” she said. “Commemorating stories kind of compounds the nostalgia and the romanticism around each one of them. And we have hundreds of these stories in every New England town.” 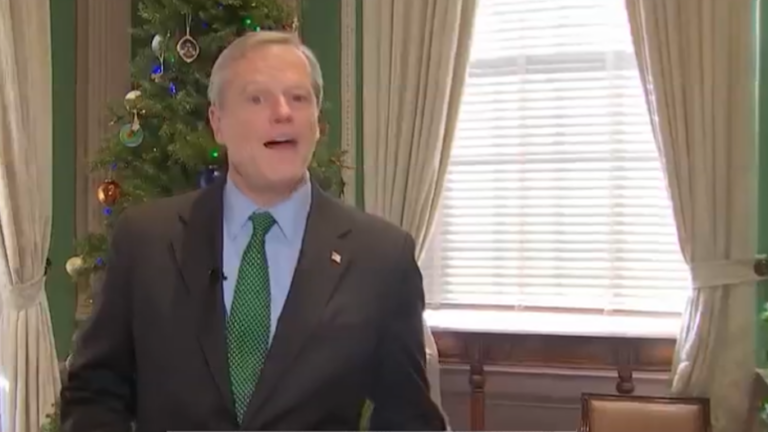 Sing it Charlie! Top Mass. politicians croon ‘Sleigh Ride,’ and some of them are … not bad?