Two blocks away from Faneuil Hall, Crispus Attucks was shot and killed on a cold March night in 1770.

The former slave and four other men who died alongside him at the hands of British soldiers — after they taunted the redcoats — were eventually considered the first casualties in the burgeoning fight for American independence.

His body was brought to Faneuil Hall where it laid for three days after what was quickly named the “Boston Massacre.”

“We believe it’s altogether fitting to idolize Crispus Attucks near the site where he gave his life on behalf of the founding of the country,” Kevin Peterson, founder of the New Democracy Coalition —  a grassroots civics organization pushing to rename Faneuil Hall in Attucks’s honor — told Boston.com this week.

The advocates say having Attucks’s name grace the iconic building would be more desirable than its current namesake, Peter Faneuil, a wealthy 18th-century merchant who built the hall with money he made trading slaves and raw goods and who ultimately donated it to the city.

Now, after several attempts within the past year to discuss the idea with Mayor Marty Walsh — through letters, press conferences, and visits to City Hall — the activists are turning to a tactic they hope will catch the city’s attention: a boycott of the famed hall and neighboring Quincy Market.

“We feel forced to engage in a boycott because it seems that within a city that reports to be democratically managed we’ve been rejected, silenced, and rebuffed by the leader of a democratically led city and we find that disappointing,” Peterson said. “But we’re hopeful that our efforts will lead to a hearing.”

As of Thursday, the boycott, also being co-organized by the Massachusetts Poor People’s Campaign and the Cooperative Metropolitan Ministries, was set to begin sometime in the next nine days and could run through the rest of the summer and into the fall.

The New Democracy Coalition started its effort in the spring of last year, later building off of the national momentum that led to the removal of Confederate memorials in cities across the country, according to Peterson.

The coalition, which petitioned City Council to consider the name change in June, finds it embarrassing that Faneuil Hall is celebrated by Bostonians and tourists considering Faneuil’s history, Peterson said.

Attucks, who escaped from slavery in Framingham, was a sailor and rope maker, according to PBS. A monument was built in his honor on Boston Common in 1888, despite criticism from some groups at the time who still saw Attucks as a villain.

News of the boycott — initially sent to the Boston Chamber of Commerce in a July 20 letter from Peterson — comes on the heels of discussion around a memorial for victims of the slave trade that’s proposed for Faneuil Hall by one of the city’s artists in residence.

Artist Steve Locke told Boston.com earlier this month that he wants the installment to reflect Faneuil’s and the marketplace’s — where slaves were once auctioned off on Merchants Row — full story.

“I understand how painful that is to have a huge edifice, the ‘Cradle of Liberty,’ to be named after a slaver,” Locke said at the time. “I’m not interested in debating whether the name should be changed. I’m interested in telling the truth about Peter Faneuil and his family.”

Peterson said he personally loves the idea for a memorial — which Walsh has also voiced support for — but added that it does not address the issues being raised by black citizens about renaming Faneuil Hall nor was it specifically asked for by the public.

He said Walsh “is trying to use this effort around a slavery memorial as a political distraction.”

“In fact, some black people might find it a little bit insulting that the first major public artistic rendering reflects back on the degradation of slavery. Some people might feel insulted,” Peterson said.

“I feel insulted when the alternative is to lift up the heroism of Crispus Attucks,” he continued. “Mayor Walsh is essentially laying out the choice for black residents in particular.”

When reached for comment on the boycott, Walsh’s press office pointed to his previous statement on the topic and Peterson’s letter.

If the name of the hall was changed now, in 30 years people would not know why it was done, the statement said.

“Not many people know about the history of that man,” Walsh’s statement said, referring to Faneuil. “And over the years, Faneuil Hall has become a place where good things have happened: historic speeches such as Frederick Douglass’ call for the end to slavery, the signing of forward thinking legislation like the (Massachusetts) Affordable Care Act, and where hundreds of people take their oath of citizenship every year.

“What we should do instead, is figure out a way to acknowledge the history so people understand it. We can’t erase history, but we can learn from it.”

Peterson maintains that the effort to rename the hall is not an attempt to erase the past. 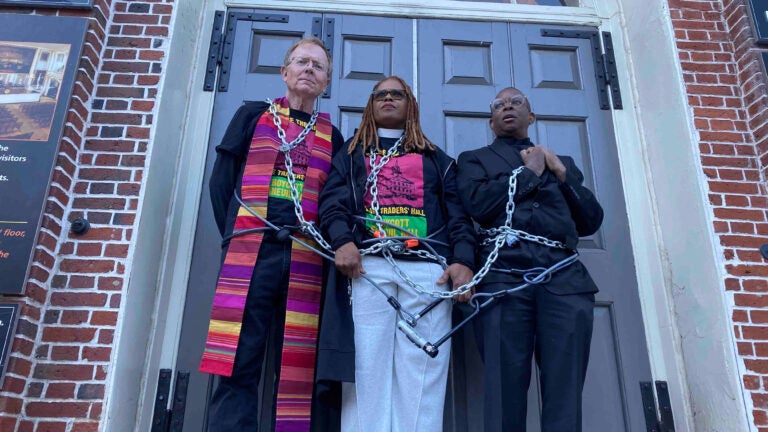