So long, Rhode Island. The Pawtucket Red Sox are officially headed to Worcester.

Or, possibly, the WooSox, for short.

“Larry, you’re a tough fish to catch, but we got you — and we’re really happy about that,” Massachusetts Lt. Gov. Karyn Polito told PawSox chairman Larry Lucchino at the official announcement Friday in Worcester.

What exactly did it take for the Bay State to lure the PawSox away from their longtime home? And what will their new digs in downtown Worcester look like? Not all of the details have been fleshed out yet, but here’s what we know so far.

How did this happen?

The PawSox status at the aging McCoy Stadium in Pawtucket has been fraught for a while now. The team’s owners had looked to move to nearby Providence, but a stadium deal there fell through in 2015. The team then proposed building a new mini-Fenway Park replica in Pawtucket. However, state lawmakers in Rhode Island weren’t able to agree on legislation to help finance the ballpark before the city’s exclusive negotiating rights with Pawtucket expired last July.

Legislators did pass a funding bill in June, but the PawSox were already essentially on the open market by that point and on the verge of jumping state. According to MassLive, the PawSox also considered Weymouth, Brockton, Springfield, and Attelboro, but it was Worcester that always had the inside lane.

City officials publicly expressed openness to the move within days of the expiration of Pawtucket’s negotiating rights, and Canal District business representatives sent the team more than 10,000 postcards from local fans. According to MassLive, local leaders from a variety of fields pitched in to sell Worcester in what was a backchannel effort dating back to 2015. The city hired consultants to help persuade the PawSox. Gov. Charlie Baker also backed the potential move last December.  More recently, as momentum built, the tea leaves increasingly hinted the decision was imminent.

“The contagious enthusiasm of the leaders of the business community, and of everyday citizens, has been warm and welcoming,” Lucchino said in a statement.

On Friday, as the news of the deal began leaking out, PawSox officials reportedly notified Rhode Island Gov. Gina Raimondo and Pawtucket Mayor Donald Grebien of their plan to move. They then gathered with Worcester officials at City Hall to make the announcement.

Breaking news from the City of Worcester

Where will they play?

According to the deal, the PawSox and the city will work together to design a roughly 10,000-seat stadium in Worcester’s Canal District, a developing neighborhood with a growing bar scene that has been called “the downtown Worcester doesn’t yet have.” Ironically, the district doesn’t actually have a canal.

The stadium deal will be part of a larger 18-acre development that will also include two hotels overlooking the park, apartments, restaurants, shops, a parking garage, and local infrastructure improvements, including the reconstruction of the notoriously dangerous Kelley Square intersection.

The ballpark itself — which will be located on a currently vacant six-acre parcel once home to metal-forger Wyman-Gordon — has yet to be actually designed, though the team did release renderings of how it will theoretically fit into the neighborhood. 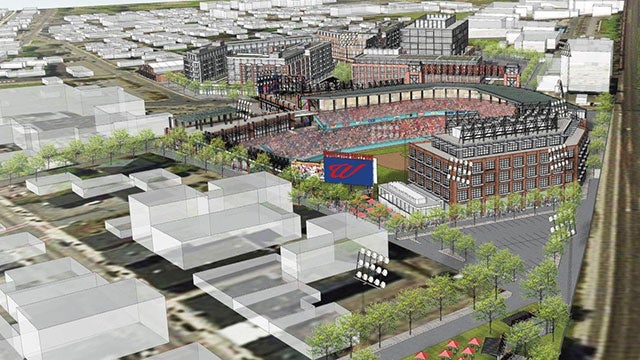 Lucchino and ballpark planner Janet Marie Smith, the same duo behind the recent renovation of Fenway Park and construction of Baltimore’s Camden Yards, will spearhead the stadium project. Officials say the “state-of-the-art, technologically sophisticated and entertaining” ballpark will showcase the unique characteristics of the neighborhood and city.

“It will look, feel and be — Worcester,” the city said in a statement.

Speaking of which, the stadium will be named Polar Park, after the city’s iconic seltzer-maker. Though rumors of the PawSox move to Worcester had been in the air for months, the news that Polar Beverages had acquired the park’s naming rights came as a surprise Friday.

Crowley would not disclose the value of the deal, said to be between 10 and 20 years, but reportedly simply insisted that it was “expensive.” 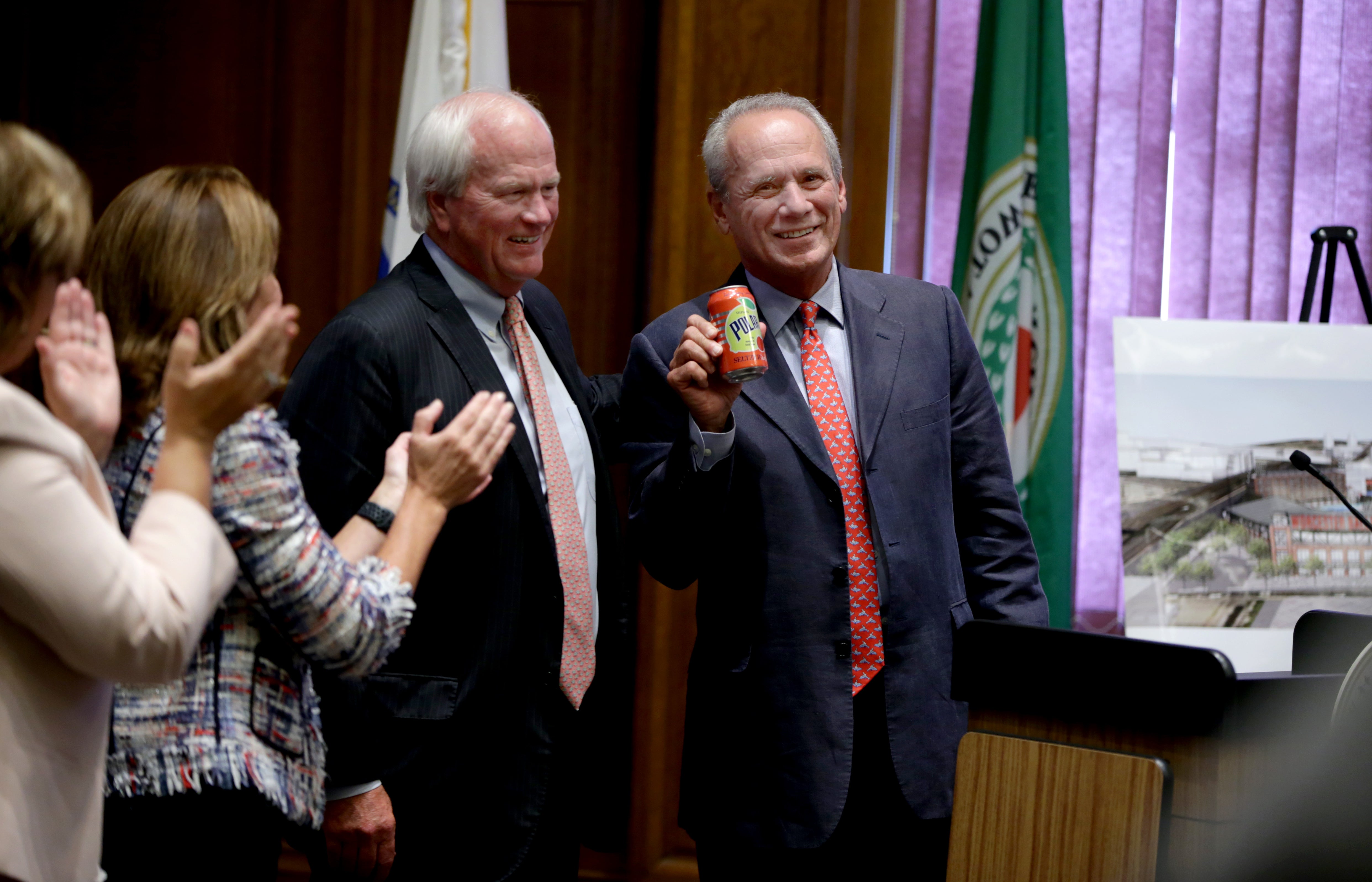 The ballpark won’t just host the PawSox — or should we say WooSox. Officials say it will be the site for at least 125 annual events, including road races, concerts, high school and college sports, and other local events. The city will also have the right to hold eight “revenue-generating” events at the park each year, as well as up to 10 “community-oriented days.”

Subject to final design, parts of the park will even be open to the public on non-event days, for things such as walking around the concourse, running the stairs, or eating lunch overlooking the field.

In addition to the planned parking garage, officials say there are around 6,000 public parking spaces within a half-mile radius of the stadium site. The ballpark will also be located roughly a half mile from Worcester’s Union Station, which is serviced by the MBTA commuter rail, and the WRTA’s central bus hub.

Officials say they plan to break ground on the stadium project next July.

So who’s paying for all this?

As exemplified by the ordeal in Pawtucket, stadium financing is under increasing public skepticism.

Worcester will own Polar Park and lease it to the team on a 30-year basis. The stadium’s construction is projected to cost $86 to $90 million, but officials say local taxpayers won’t be on the hook. The entire development area is expected to be “self supportive,” Augustus said Friday.

“No existing city tax revenue will be used to fund the ballpark project,” Augustus said. “In essence, the project will pay for itself.”

The city plans to borrow $100 million to cover the stadium construction, as well as other related costs. Then, by creating a special taxation district that encompasses the ballpark and surrounding development, the city will use new tax revenue generated from the district to pay back the loan. According to the deal, the team is responsible for paying any cost overruns of the stadium’s construction, shielding local taxpayers if the project goes over its estimated $86 to $90 million total.

The PawSox are also contributing 33.8 million toward the cost of building the stadium.

Though no state funding is being used for the actual ballpark project, Massachusetts and Worcester are kicking in for the redevelopment surrounding the stadium.

Massachusetts is committing $35 million in public money for the development over the next two to three years, including $2.5 million in tax incentives, for the residential apartments part of the project. Polito said Friday that the project represents opportunity, “not only for the players and the spectators that will come to that ballpark, but for the residents who live in Worcester, and in this area, and the new residents who come and call this their home.”

Madison Downtown Holdings, the developer of the project, is also receiving tax incentives and certain waived fees from the city for the construction of the apartments and one of the hotels, according to the deal. The Telegram & Gazette reports that the incentives from the city are worth a total of $5.6 million, though they’re estimated to collect more than $20 million in additional revenue from the redeveloped properties. 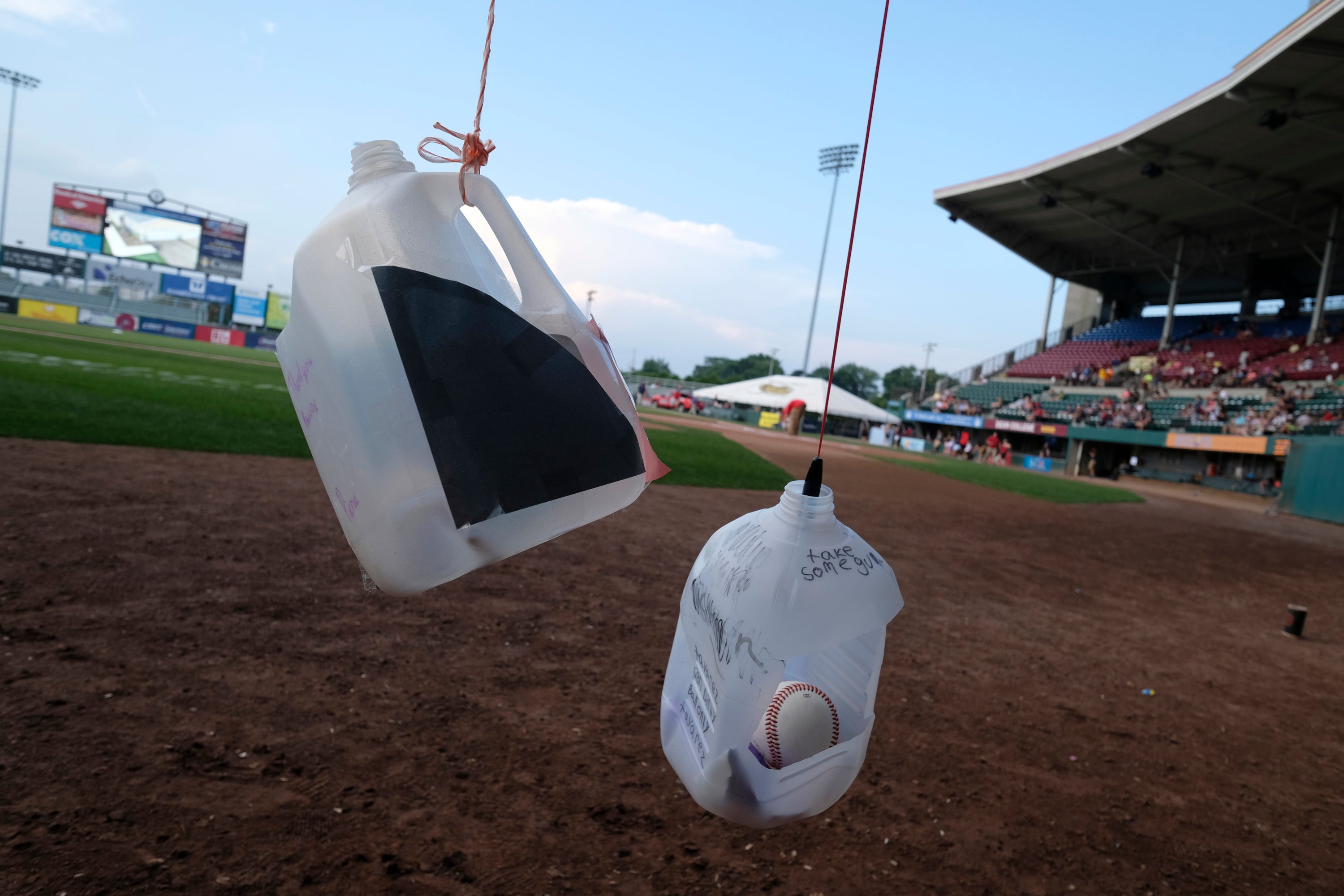 A long-standing tradition at McCoy Stadium is for fans to lower items to be autographed from the stands above the dugout.

What was Rhode Island’s reaction to the move?

Elected officials in Pawtucket and Rhode Island expressed profound disappointment — and a certain degree of dismay — in the PawSox’s decision to leave.

“The PawSox do not make Pawtucket. Pawtucket made the PawSox,” Grebien said in a statement to media outlets.

The mayor said that Pawtucket had been working with the team up until the final hours on a deal to keep them in the city.

“Sadly, we had to learn through media reports, like everyone else, that the ownership group had decided to take our team and move it to Worcester in light of substantial subsidies provided by Worcester and the State of Massachusetts,” he said.

Recalling his late mother’s advice, Lucchino said he made the decision to go “somewhere you are wanted, not where there is controversy and opposition.” And according to MassLive, the team faulted Ocean State lawmakers for their delays in agreeing to a deal.

As WPRI reported, elected officials in Rhode Island said their offer included stronger protections for taxpayers and characterized the process around their proposed deal as more transparent. However, Worcester and Massachusetts simply offered the team more.

*No* political appetite in RI for that kind of $$$ https://t.co/elUaonMOFS

“It is disheartening the PawSox did not show the same loyalty to the City of Pawtucket and the State of Rhode Island as the taxpayers and fans have shown to them for many decades,” House Speaker Nicholas Mattiello said.

In a press conference Friday afternoon, a “deeply disappointed” Raimondo noted that her office and the PawSox had negotiated a deal more than a year ago, which was passed by the state Senate back in January. However, the final version of the stadium financing legislation didn’t reach her desk until June.

“It didn’t to be this way,” she said Friday.

Raimondo called the deal from Worcester “much, much more generous than we were offering and, frankly, that Rhode Island can afford.”

“From what we can tell, its many, many millions of dollars more in taxpayer subsidy to the PawSox,” she said.

In Worcester, the deal must still be approved by the City Council, which will begin reviewing the agreement Tuesday. The move is also subject to approval by the Independent League, the regional league the PawSox play in, and the larger Minor League Baseball organization.

The Worcester Redevelopment Authority is also reportedly scheduled to meet Wednesday to begin discussing how the ballpark construction project will be overseen.

Though officially named the Worcester Red Sox, the team says they’ll be seeking public input on an official nickname and mascot. Lucchino acknowledged that “WooSox” is one possibility, after chants of it broke out at Friday’s announcement. The team says it’s also working to make season tickets available in the “near future.”

“This is not the beginning of the end. This is the end of the beginning,” Lucchino said, adding that the team is looking forward to “a hell of a ride with Worcester.”

In the meantime, the PawSox have two more summers at McCoy Stadium. Better grab your plastic autograph buckets while you still can. 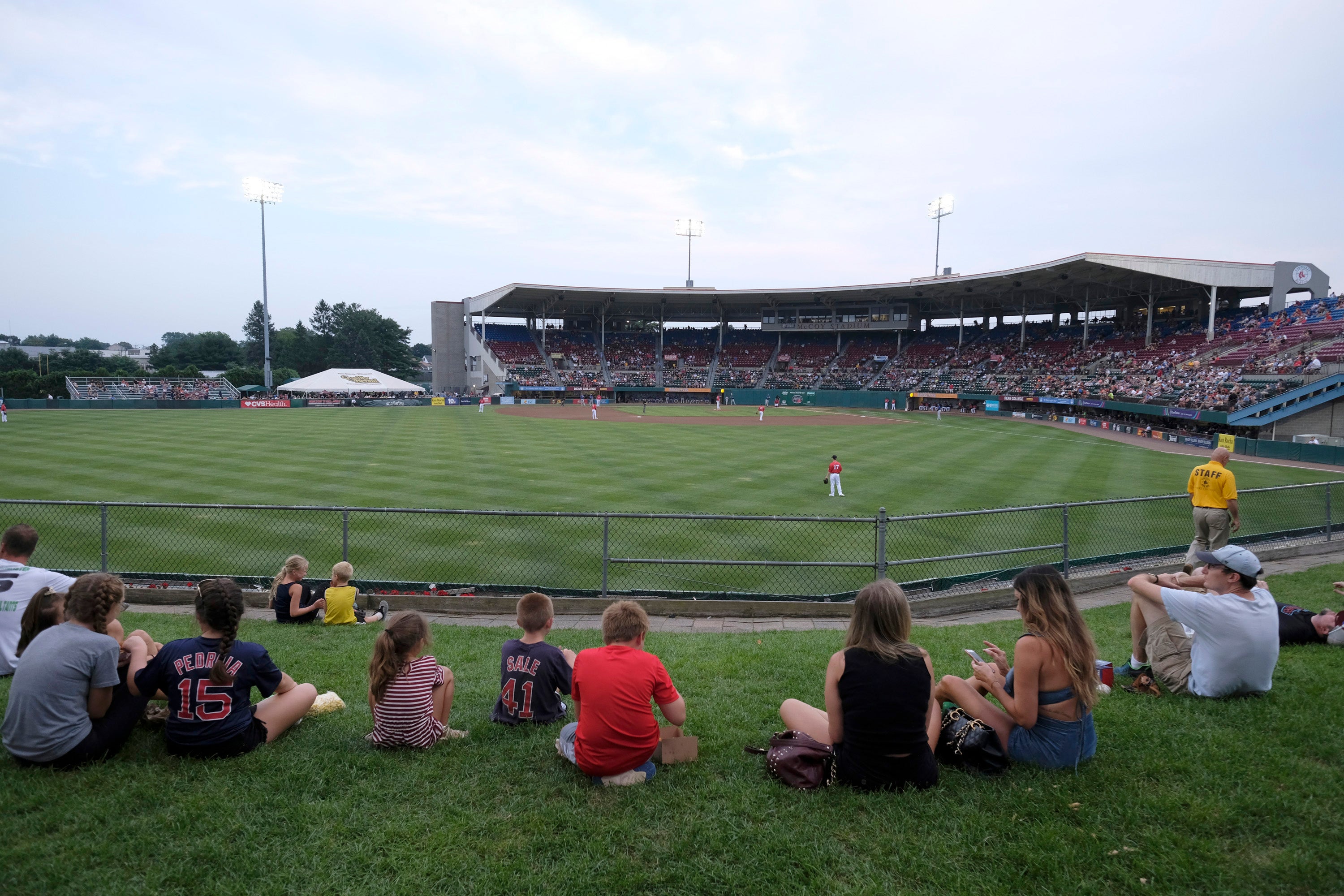 Fans sit on the berm at McCoy Stadium just hours after the Pawtucket Red Sox announced a planned move to Worcester.