A recovery process is underway this week after over 60 fires and at least three explosions broke out in homes across the Merrimack Valley last week serviced by Columbia Gas pipelines, leaving approximately 25 people injured and an 18-year-old Lawrence man dead. The event displaced thousands of Andover, Lawrence, and North Andover residents.

People in houses and apartment buildings fled their homes last Thursday afternoon as firefighters stomped out the blazes and local officials cut electricity to the region as they worked to pinpoint the cause of the emergency. Leonel Rondon, a student at Phoenix Charter Academy, died after a chimney from an exploding house landed on a car he was sitting in near 35 Chickering Road in Lawrence, according to the Essex District Attorney’s office.

In total, emergency personnel tackled between 60 and 80 structure fires and 150 emergency calls within hours, state officials said last week, adding that 8,100 to 8,500 gas meters were connected to the over-pressurized pipes.

Drone video showing the extensive damage of one of the many homes impacted in #Lawrence. #Boston25 #Drone25 #MerrimackValley pic.twitter.com/dhdj6iKKLp

In the days since, residents have gradually returned to their homes, but many were left without working gas connections to their dwellings or businesses. Long lines and frustration have met those who have flocked to a Columbia Gas claims center seeking help and answers.

“For many people, this is going to take a while, and it’s going to create some real hardships for them,” Baker said Monday, the Globe reports. “I think the ripple associated with that is real.”

Here’s what what we know about the crisis as of Tuesday afternoon:

While state officials have said the emergency involved over-pressurized gas lines, a definitive reason could take some time to investigate.

“The investigation, as I understand it, will not be focused on the end users of the gas but on the distribution system and the origin of the pressure,” Kurt Schwartz, director of the Massachusetts Emergency Management Agency, said Friday as the review was just getting underway.

Still, in a letter to Columbia Gas and its Indiana-based parent company, NiSource, Inc., Monday, U.S. Sens. Elizabeth Warren and Ed Markey wrote that the pressure in the system read 12 times higher than what it was meant to hold, based upon a report from the federal Pipeline and Hazardous Materials Safety Administration.

Pressure in the gas lines should have been approximately 0.5 pounds per square inch, or PSI, but instead came in at at least 6 PSI, according to the letter, which sought answers to questions surrounding the company’s response to the crisis and information about pre-planned upgrades to gas lines that were announced ahead of when the fires broke out.

“We have requested a hearing in the Senate Commerce Committee on this incident and we hope that you will cooperate fully and transparently with federal investigators,” the letter said. “We write to request that you provide us with information in order to help the American people understand why this terrible disaster occurred, whether the company was sufficiently prepared to respond to an incident of this magnitude, and how we can prevent any similar tragedy in the future.”

The National Transportation Safety Board (NTSB), which has jurisdiction over pipelines, has said part of the investigation is centered around gas pressure sensor equipment that was connected to an out-of-service pipeline, according to the Globe. The board said Sunday gas moved through pipes at a notably higher speed Thursday, but it was unclear why that happened.

Robert Sumwalt, chairman of the NTSB, said Friday agency investigators will review the pipeline system’s design, any completed upgrades or ones currently in the process, Columbia Gas’s management system and safety plan, and the emergency response.

“We’ll be looking at a number of things,” Sumwalt said. “Investigations such as this are very thorough. They take time.”

Is service back to normal?

The short answer: No.

While thousands of residents had made their way back to their homes by Sunday and schools reopened this week, many people remained without gas service after technicians and first responders shut it off last week as a safety precaution.

Getting the three communities back to regular service could take weeks, officials have said.

Columbia Gas said Sunday it will replace 48 miles of pipeline in Andover, Lawrence, and North Andover to make certain that the system is safe before service is fully restored, the Globe reports.

“We’re deeply sorry for the devastating impact on the community and how disruptive the incident has been for the daily life,” Joe Hamrock, president and chief executive of NiSource said. “We’re in this for the long run. This is going to take time to get life back to normal.”

Cooking remains a challenge for many, including local restaurants that have gone without business for days.

“I was surprised at how much I had to throw away,” John Farrington, owner of Carleen’s Coffee Shoppe in South Lawrence, told the Globe Monday.

More than 600 technicians were out working in the area Tuesday, Columbia Gas said on its website.

What politicians are saying

Warren posted on Twitter Monday criticizing the company after news reports this week showed many residents waiting in long lines at a claims center.

“This is unacceptable,” Warren’s tweet said. “[Columbia Gas] needs to take real responsibility here — and part of that includes working overtime to help the thousands of families who have been affected by the #MVgasfires.”

This is unacceptable. @ColumbiaGasMA needs to take real responsibility here – and part of that includes working overtime to help the thousands of families who have been affected by the #MVgasfires. https://t.co/F6CgonlnFB

Baker and Lawrence Mayor Dan Rivera had tough words for Columbia Gas in the immediate aftermath of the emergency Friday, saying that the company had fallen short of where recovery efforts should have been nearly 24 hours after the crisis started.

On Tuesday, Baker, Rivera, and other state officials and Columbia Gas executives announced that the company would donate $10 million to the new Greater Lawrence Disaster Relief Fund, which the company said would go toward housing, food, and other support services.

“Obviously last Thursday’s events shocked everybody in the Merrimack Valley and in the greater Lawrence community and devastated families and businesses,” Baker said at a press conference where the donation was announced. “Homes were ruined, businesses closed. Loved ones were injured, displaced, and, in one tragic case, we lost the life of a young man, and together Lawrence, Andover, and North Andover are slowly beginning to pick up the pieces.

“The recovery process is underway,” he continued. “People have been able to go back to their homes, but there remains a long road ahead.”

Baker said the creation of the fund, which will be overseen by the Essex County Community Foundation, is one way officials can address the great need for humanitarian aid in the region in the next few weeks.

“We know that this is one of many ways [Columbia Gas is] going to live up to their corporate responsibility,” Rivera said.

What Columbia Gas has said

Columbia Gas received backlash over its initial public response to last week’s emergency from residents and politicians who had sought answers about what had happened.

The Globe reported last week the company offered sympathies to those affected in its first several statements on its website, but it didn’t offer an apology or insight into what may have sparked the crisis.

Columbia Gas President Steve Bryant said Friday afternoon the company was sorry and that representatives had been meeting regularly with state officials during the recovery process.

Hamrock said Sunday the company is fully cooperating with the investigation and is open to full transparency.

“It’s heartbreaking to see this devastation and this tragedy,” he said. “On behalf of the entire NiSource and Columbia Gas family, all of our employees, we all express our sincere regret and commitment to restoring lives here in the Merrimack Valley in the days and weeks ahead.”

On Tuesday, Bryant thanked officials and other utility providers that have assisted in the recovery process.

“It’s been a remarkable effort to address this tragic event,” he said. “I want to acknowledge, recognize the fact this event has resulted in a profound impact to the community. The citizens of these communities are hurting and as a step in a longer process Columbia Gas would like to announce that they will make an immediate $10 million contribution” to the relief fund.

What residents are saying

Renata Rena and her 3-year-old daughter were among hundreds of residents who stood in line at the Columbia Gas claims center set up in the old Lawrence High School Sunday.

“I am tired,” Rena told the Globe, adding that the system was inadequate. “I am frustrated.”

Business owners have expressed worry over their losses in the days they were forced to shutter their doors amid the absence of electricity and gas service.

“All of the meat, we just threw it out,” Juan Polo, the co-owner of two bodegas in South Lawrence, told the newspaper. “We need to open, we need to start selling stuff.”

Polo said he had to toss about $30,000 worth of food from his stores and estimated a loss of $1,200 a day at one of the shops where he sells food cooked using gas connections.

On Tuesday, the national law firm Morgan & Morgan announced that it had filed a class action lawsuit on behalf of displaced residents.

Lawrence resident Francely Acosta filed the complaint, which accuses NiSource of negligence because it allegedly failed to maintain the gas pressure in a system that was “poorly maintained, antiquated, obsolete, and highly dangerous,” Reuters reports.

The lawsuit is seeking unspecified damages for residents and an order for NiSource to make the system safer.

A town hall event hosted by Morgan & Morgan is scheduled for Thursday night in Lawrence.

Daniela Taveras, a single mother from Lawrence, told Boston Herald columnist Jessica Heslam she has taken a cab to her mother’s house in North Lawrence so her children can use warm water to bathe.

She fears that there could be more explosions when the gas service is restored, according to the newspaper.

“This is a very hard situation. Thank God it’s not winter yet. When it gets to the winter time, will it happen again?” Taveras said. “If they do put gas in our houses, everybody’s afraid to even turn the stove on. They’re going to think, ‘It’s going to happen again. It’s going to blow up.’”

Fully restoring gas service to the three communities will take some time.

Baker said Tuesday the recovery process is in the second of three phases, with crews currently assessing damages and undertaking mitigation efforts. The next and final stage involves carrying out the needed system repairs, he said.

Posted by Columbia Gas of Massachusetts on Monday, September 17, 2018

Technician crews are inspecting connections at all houses and buildings one by one, according to Columbia Gas.

Baker said the company opened another claims center in Andover Tuesday and another is set to open in North Andover Wednesday.

He encouraged the public to continue to donate to the emergency relief fund through the Essex County Community Foundation as officials launch the fund in the coming days.

“We continue to believe there remains a lot of work to get this all done,” Baker said. 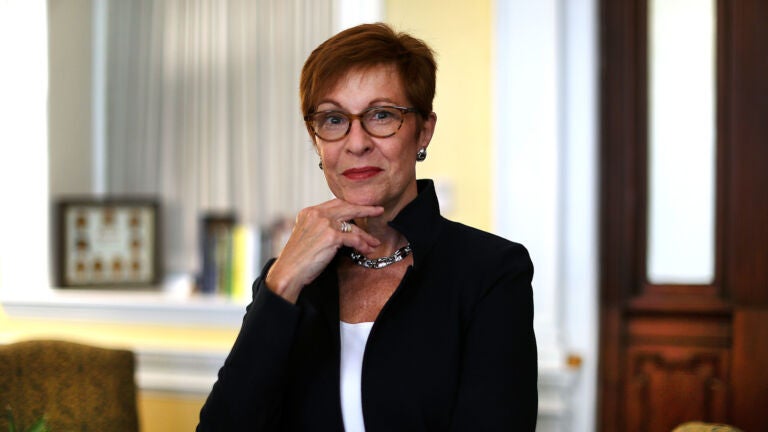