Did they really find it? That’s the question some have been asking.

After questions were raised about the widely circulated story of the two Malden men who purportedly came upon the Red Sox AL East title banner on a street in Somerville, local police briefly opened and then closed an investigation into whether the banner was stolen or found, according to WBZ.

Tony LaFuente, the owner of the company that makes the Red Sox banners, told the The Boston Globe Friday morning that he had filed a report with Somerville police in an attempt to figure out “what happened.” However, the department said Friday afternoon that they had ended the investigation at his request.

“The investigation has been closed at the request of the complainant,” Somerville police said in a statement. “The SPD is no longer looking into the matter.”

LaFuente did not immediately respond to an email Friday afternoon asking why he reversed course and asked for an end to the investigation. His company, Fangraphics, said they had no comment on the situation.

Louie Iacuzzi, a 44-year-old Malden resident, and his friend, James Amaral, say they found the banner early Monday morning in the middle of McGrath Highway in Somerville. Initially, they asked for some sort of compensation — money, tickets — for its return.

“We’re working, too. I mean, my man had to run across three lanes of traffic,” Amaral told The Boston Globe in a video interview that went viral Wednesday.

Ultimately, they returned the banner to the team Wednesday afternoon without any compensation.

Also on Wednesday, LaFuente began making suggestions that Iacuzzi and Amaral weren’t telling the full truth. The Flagraphics founder told the Globe that he wasn’t sure if the banner “fell off the truck, or if it walked off the truck.” While he admitted that his trucks often take McGrath Highway, LaFuente asserted that “these guys stole my banner.”

“I’ve been doing work for the Boston Red Sox since 1992,” he said. “Nothing ever happened like this.”

Iacuzzi vehemently denied the allegation that they stole the banner, telling the Globe on Wednesday that he was “trying to do the right thing.”

“If I didn’t pick it up, a hundred people would have ran over it,” he said. “I don’t want a million dollars. I don’t need a million dollars. All I wanted was to maybe bring my family, my friends to a [expletive] baseball game, maybe meet a player. … The flag is back home with the Boston Red Sox.”

According to the Globe, LaFuente confirmed Friday that he had filed a police report, and both Iacuzzi and Amaral declined to comment in response.

“At this point I really don’t want to talk about it,” Amaral told the paper. “The media has tried to make fools out of us.”

Meanwhile, LaFuente had a replacement banner made for the Red Sox, which clinched the division with their comeback win Thursday night against the New York Yankees. And even though the original banner was returned, the team decided to hang the replacement Friday morning.

“We preferred to use the one that was in our possession the entire time,” Red Sox spokeswoman Zineb Curran told Boston.com. 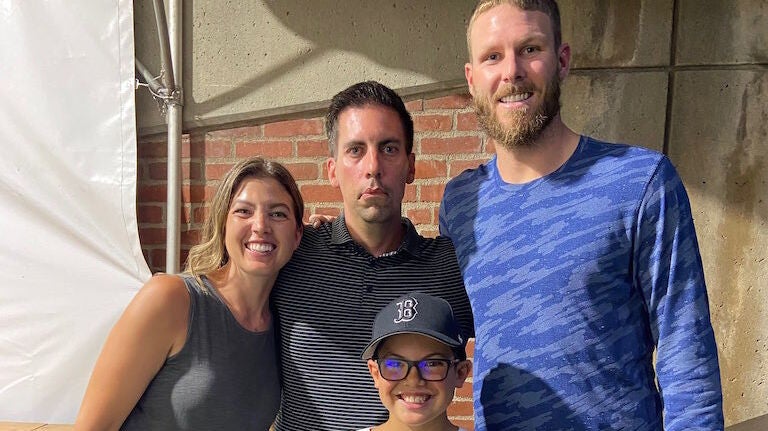