HUBweek, the “festival for the future” put on by The Boston Globe, Harvard, Massachusetts General Hospital, and MIT, convened the final of its three forums Friday on City Hall Plaza.

Focused on the “future of cities, energy, and mobility,” the daylong event included some of the country’s most prominent experts and thinkers involved in shaping the next wave of technology that will impact everything from the macroeconomy to the most elemental aspects of our daily lives. The question, however, isn’t whether there will be major changes, but who they will benefit — and how?

1. How to help the people left behind

While the Boston area may be well-positioned amid the rapid technological advances changing the economy, one of the foremost concerns is the collateral effects on the people who’ve traditionally made a living in industries threatened by that shift.

“These new discoveries must be inclusive and must benefit everyone,” Maria Zuber, the vice president for research at MIT, said during a discussion Friday with Eric Lander, the founding director of Harvard and MIT’s Broad Institute, and Ash Carter, the former secretary of defense under President Barack Obama.

Zuber believes new technologies will create more jobs than currently exist, but she said it’s a question of whether those displaced will be incorporated into those new jobs. She noted that there are currently an estimated 800,00 jobs in clean energy, which was the about same number of coal mining jobs at the industry’s peak in the 1920s.

“Now there are 50,000 coal mining jobs,” she said. “And you can bet that most of those clean energy jobs have not gone to coal miners.”

Carter said the technology companies and startups also share some of the responsibility to consider ways to help people left behind by their disruptive innovations. He said it’s also in those companies interest to do so, since the surrounding communities will be where they get their employees.

“We can’t have a cohesive society if people don’t see a path ahead for them and their children,” said Carter, who’s now the director of Harvard’s Belfer Center for Science and International Affairs. “I want to live in a cohesive society.”

2. China is beating the United States when it comes to new tech

There’s also the question of whether the United States itself will get left behind in the technological arms race.

“You can’t expect to live in a world of post-World War II, where we have all the money and all the technology, forever” Carter said. “But that doesn’t mean you lose your way.”

Unlike during the dawn of the computer age, when most of the investments were backed by the United States government, Carter said the next wave of advancements will be “global” and “commercial.” However, there’s one force in particular with which to be reckoned: China. Carter said the United States has to “up our own game,” if the country wants to compete with China on things like AI and technology infrastructure.

And they have a big head start.

Zuber noted that the Chinese telecom giant Huawei is leading the way in investments in 5G, the next-generation mobile network, along with Finland’s Nokia and Sweden’s Ericsson. She said China has more than 200 of the 500 fastest supercomputers in the world. And she said they plan to invest 100 times more than the United States in AI.

Despite the recent private sector growth in the United States, both Carter and Zuber agreed the federal government is needed to step in and fund basic research and discovery in these developing tech fields.

“We’re not investing enough, and it’s not even close,” Carter said.

3. Alexa, do we really need so many virtual assistants?

During a talk about the next frontier of in-home “smart” devices, Michele Turner, the senior director of Google’s “Smart Home Ecosystem,” and Colin Angle, the co-founder and CEO of the Massachusetts-based iRobot, the maker of Roomba, both promoted the newest generations of their companies’ AI personal assistants. In their vision, people would employ a collection of interconnected devices within their home.

“People are not eager to add complexity into their worlds,” Angle said. “Whatever you do, the end result should be, ‘I live my life in the home, and that experience should be enriched by the home doing the right thing.'”

Turner predicted that there will be between five and 20 “smart devices” in the average home.

But why are all these new gadgets necessary? Do we really need to have robots for every single daily routine task?

According to Turner, it’s not so much that these devices do individual tasks better than humans, than it is about making life simpler.

“Our most precious commodity is time, and one of the things the true thoughtful home can do is save us time,” she said.

Turner envisioned a smart-home system in which a person says, “OK Google, goodnight,” and the AI assistant would automatically turn off all (or the desired) inside lights in the house, lock the doors, turn on the alarm system, set the thermostat, and tell them their calendar for the next day,

“Can I do all that manually? Absolutely,” she said. “But it’s 11:30 p.m., I’m tired, I’m already late for bed anyway, and I don’t want to run around the house doing all that stuff. … It’s that simplification of our lives that really makes a difference over time.”

Angle added that he envisions these devices will be adopted incrementally over time. WBUR reporter Zeninjor Enwemeka, who moderated the discussion, raised the notion that AI assistants had the potential to provide the most benefit to elderly and disabled people.

“Adding that layer of intelligence into it that allows the home to create more peace of mind, to behave more intelligently so that I don’t have to do the work, and to just generally behave in a more thoughtful way,” Turner said.

4. The real dangers of AI

Rosalind Picard and Pattie Maes, both from MIT’s Media Lab, say AI gets somewhat of a bad rap — in part due to the nature of its name and in part due to its dystopian representations in Hollywood.

In a conversation with New York Times columnist Maureen Dowd, the two MIT professors tried to dispel the movie-inspired fears about AI rebelling against its creators.

“When we talk about artificial intelligence, we think of human-like robots that come to take our jobs, or kill us, or whatever — chase us to Mars,” Maes said. “But they’re not really generally intelligent in anyway. The AI systems that are so successful right now are highly specialized systems that are good at doing one thing, and that’s all they do. They don’t have their own goals or intentions or evil goals of taking over humanity. I’m actually not so worried about these scenarios of killer robots.”

But that doesn’t mean there aren’t things to fear.

“I’m much more worried about the subtle ways, the less physical ways, that AI will affect everybody’s lives,” Maes said.

Given concerns about discrimination in machine learning, Maes pointed giving AI control over hiring or loan decisions. And while both Picard and Maes, who are both involved in developing AI systems, felt it has great promise to improve people’s lives and decision making, they also said that engineers need to be taught more about the ethics and social implications of their systems.

“Right now, they’re not really trained to think about that, and their systems have enormous consequences because they’re so ubiquitous, and then it’s hard to fix things after problems emerge when billions of people are using their technologies,” Maes said.

To illustrate the point of the already deleterious effects of omnipresent technology, Picard recalled a story from one of her colleagues, who helped develope iOS, the operating system for iPhones. The colleague had gone to a Foo Camp, a type of hacker conference where the agenda is developed by the attendees.

“During a break, you would expect all of them to want to connect with each other,” she said. “But instead they were all hunched over their phones. … And he looked around at everyone, not engaging with each other, and he said, ‘I feel badly that I invented this.'”

5. The Boston ‘unicorn’ founder who wants to grow roads. Literally.

Last year, Ginkgo Bioworks became Boston’s latest “unicorn,” a term for a company with at least a $1 billion valuation. The Seaport-based startup has dubbed itself the “organism company” for its work genetically engineering microbes.

Kelly said the company’s current work ranges from partnering with beverage companies on zero-calorie sweeteners to reviving the scents of long-extinct flowers to create a perfume for fragrance companies. And unlike the computer revolution, bio-technology has the potential to completely transform the actual physical world, he said.

In the near term, Gingko has partnered with Bayer on a joint venture working to grow crops that effectively self-fertilize and cut down on pollution. But among his long-term aspirations for the field is to use biology to manufacture — or, more accurately grow — everything from chairs to housing to roads.

“The better manufacturing technology is biological,” Kelly said. “Biology has the amazing capability of repair, right? You get a cut on your skin, and it fixes itself. Well that would save us a lot of money if our roads could repair themselves. So imagine a living road. Why not? Biological materials already exist that have the strength of roads. … The challenge is it’s like asking what we’re going to do with computers in 1960. You never could have predicted.” 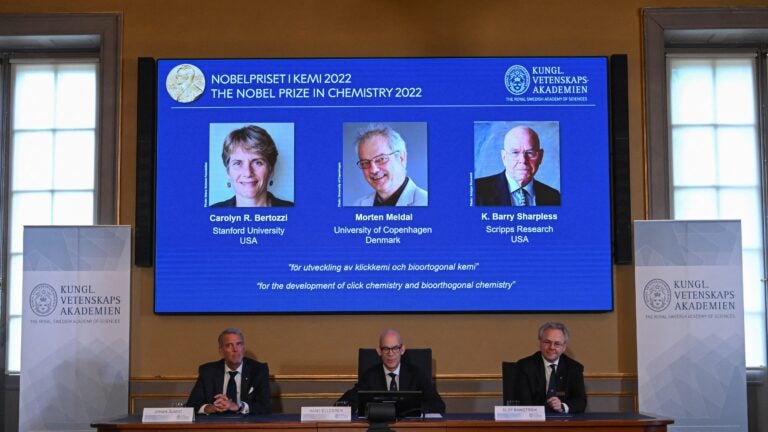