Store officials said they were expecting ‘thousands‘ of customers. And they got them. (8:45 p.m.)

As they wrap up for the night, Cultivate says their final customer tally for the day is “over a thousand,” with the most popular selling items being their Chocolate OG flower and their edible gummy cubes.

.@netacaremass is telling me the company expects to have served a total of about 2,000 customers by the time its store in Northampton closes at 10 p.m.

Cultivate stopped new customers from getting in line around 3 p.m., but not due to lack of supply. (5:02 p.m.)

Cultivate has begun turning customers away. The end of the current line isn’t expected to get until around closing time at 8 p.m. they’ve had over 1,000 customers so far.

The store is urging people to come back tomorrow, but it’s worth noting that they’ll be open at 10 a.m. (not 8 a.m. like today) and that 10 a.m. to 8 p.m. will be their normal operating hours going forward. Closed for Thanksgiving and other major holidays though.

Lines outside the dispensaries in Leicester and Northampton remained long during the afternoon. Cultivate is open until 8 p.m., while NETA will shut its doors at 10 p.m. (3 p.m.)

And the people just keep coming. A shuttle just added to the ever-long line.
The folks at Cultivate say about 500 people have been through to get weed in different iterations. They’re expecting “at least 500 more”. @WBUR pic.twitter.com/tR6eF1xE5k

Still a steady stream of customers in #Leicester the first day of recreational sales. Officially, it’s a two hour wait, but many have been here since early this morning. #wcvb pic.twitter.com/UbOuQjEKsd

RIGHT NOW: Security in #Leicester has shut down the parking lot. No more new customers for the day. Security tells me there are 400-500 people in line at the store and it closes at 8pm. They said people have been taking a long time to shop. #marijuana #7News pic.twitter.com/JMPRShr952

The line for recreational marijuana sales wraps around the block in Northampton, despite the rain. What this means to the area and local colleges on @NBC10Boston & @NECN at 4 & 5pm pic.twitter.com/Q4lHMJkkhg

The wait time in Northampton is reportedly more than two hours, while in Leicester police are telling hopeful customers they have a three-hour wait ahead of them. (11:01 a.m.)

Meanwhile, these enterprising folks from a nearby tattoo laser removal shop are out on “munchie patrol,” trying to drum up business by handing out brownies. pic.twitter.com/v8LUW2AHIo

The situation is about the same here at Cultivate. The people just now getting in the door say they got here around 8:30 a.m. https://t.co/ZD9NpHPrGl

Long line of cars waiting to get to the parking lot for Cultivate in Leicester on this first day of recreational marijuana sales in Massachusetts. Leicester police cruisers have been patrolling up and down the line. @masslivenews pic.twitter.com/9yd4luoV92

A cop going from car to car in Leicester is telling customers it will be a 3-hour wait from now to get to Cultivate to buy recreational marijuana. @masslivenews

Here’s the line of cars making its way into satellite parking. They’ll then get in line, to get onto a shuttle van, to head to #Cultivate, to get in line to get in. #Leicester pic.twitter.com/v37VpyqKIi

Meanwhile, @mlevenson and I drove down to the parking lot at Everlast Nursery, but couldn’t get very far. There’s a pretty significant snaking line of cars, just waiting for spots in the lot.

And that’s before they wait outside the dispensary itself. Word of the day: Patience!

Employees say they counted more than 500 people in the first two hours.

Northampton Mayor David Narkewicz shared the receipt of his purchase, the first sale made at NETA, on Twitter. (10: 21 a.m.)

The receipt is part of the historic first purchase! Plus, I needed to make sure #NorthamptonMA was properly credited its local share of new tax revenue. pic.twitter.com/wytIGImGdy

Purchase of most of the edibles at Cultivate still require the customer to be a medical marijuana cardholder. (10:07 a.m.)

With the exception of the gummy cubes, Cultivate’s edibles are currently only available for medical cardholders. pic.twitter.com/5GvWR2haDH

Another reason to get that medical card: Marijuana-infused pumpkin spice dust ? pic.twitter.com/D3wNrssyAT

Less than two hours after the start, here’s where the line is (and it goes further than my video could catch!) pic.twitter.com/UUKC0IvGY2

On his way out the door, someone says to me “They should give out a badge…. it’s called 50 years in the making!”

Sam Barber, the president of Cultivate: “We’re really happy to see everybody smiling, even though it’s not the best weather. But either way it’s a really great day.”

Barber also stresses the safety element: “This is new for the state. People need to be aware that you can’t drive under the influence of this, same as alcohol. And if it’s your first time using, start low, go slow.”

Customers at the dispensaries noted the historic nature of being able to purchase marijuana legally for the first time. (9:45 a.m.)

Ralph Raposa started using marijuana almost 50 years ago. This is his first legal purchase. He picked the strain because of its high THC content pic.twitter.com/M11p9IPSdb

Paul Perry, 57, an unemployed salesman from Milford who grows his own marijuana in a barn, prepares to be among the first to legally buy recreational pot in MA. “I want to join in and support it. I’ve waited long enough. Too long.” pic.twitter.com/jcI8pGVHcO

Sandra Bylaska, 62, an unemployed mortgage processor from Berkely, Mass., pulled an all-nighter to get in line for recreation pot. “I want a picture of me standing next to a cop with a joint in my mouth because it’s history. We can tell the next generation: I remember when.” pic.twitter.com/3GCFzvZdIA

Customers drove from as far away as New Jersey to visit the dispensaries. (9:21 a.m.)

Boudicca Arieli drove from NJ overnight with her boyfriend to experience the first recreational shop on the East Coast. (Fun fact: Boudicca and I grew up in the same area of South Jersey!) pic.twitter.com/88WABi2aSv

After an hour of sales, the line outside Cultivate has stretched through the parking lot to the road. (9:11 a.m.)

Cultivate has been open for an hour, and the line has reached the road. pic.twitter.com/IjG7i0FuJ0

Shuttles are running every 5-10 minutes picking up 15 people at a time from the Everlast Nursery parking lot. Things seem to be running smoothly at least on this end. #wcvb pic.twitter.com/6zBi3IGL7G

Lines are growing! Security says everything is still moving along smoothly. Lots of cars though. Parking lot is full so folks are parking on the street as well. #wcvb pic.twitter.com/BKDkFa6r5q

In Leicester, Cultivate has the required “consumer education” material on display. (8:56 a.m.)

Here’s some of Cultivate’s consumer education material, which all dispensaries are required to have: pic.twitter.com/62RUMgFr6v

Overheard from a customer who just walked in: “It smells fantastic in here.”

The line outside NETA was wrapped around the block after sales began. (8:35 a.m.)

The line is now around the block at NETA in Northampton. pic.twitter.com/xT8oDmbxq5

One customer waiting in line outside the Northampton dispensary donned an apt costume for the historic day. (8:30 a.m.)

There’s a guy dressed like a plant among all those in the long line of people waiting to be first in line to buy marijuana at New England Treatment Access pic.twitter.com/21ffGQw4Hg

Someone dressed up like #Marijuana to stand in line to buy marijuana in #Massachusetts. The first recreational sales began at 8am. #7News pic.twitter.com/sW2xNuuBsy

Stephen Mandile, Iraq war vet, shows off the 1st legally purchased recreational pot in MA: an eighth of “Jack Kerr” and a pre-rolled joint “for the Smithsonian or something.” Price: $79. “It’s an honor,” he said. “It’s something amazing.” pic.twitter.com/VNQLI3mF0T

The first sales of recreational marijuana were made at both dispensaries. (8:02 a.m.)

“Can I get a receipt?” @MayorNarkewicz completes first recreational marijuana purchase in Massachusetts as NETA staff cheers wildly. pic.twitter.com/J7n2b1jf5G

People were let inside Cultivate before the official start of sales. (7:52 a.m.)

They just started letting people inside. Still another 15 minutes before Cultivate opens for sales. pic.twitter.com/In60pSfOIK

Stephen Mandile is first in line, ready to be the first customer here at Cultivate. pic.twitter.com/sdeqsrABLd

Staff members at NETA in Northampton prepared for the start of sales. (7:45 a.m.)

People have braved the sleet and cold to snag a spot in line outside the dispensaries in Leicester and Northampton. (7:25 a.m.)

Here’s a look at the line already forming here outside Cultivate. About 20 people in line currently. Shuttle buses are bringing customers from a separate parking lot down the street. pic.twitter.com/Kz50C9Hrxv

Sleet is turning to snow here in Northampton as dozens of folks wait for recreational marijuana sales to begin at NETA. #cannabis pic.twitter.com/zoMih57du6

Daquaan Hamilton, 22yo UMass Amherst student, is first in a long line at NETA in Northampton. He’s been here since 12:30am, braving the sleet. “The legalization of weed is a huge step forwards for all of us.” #marijuana #cannabis pic.twitter.com/LyYCeP3J3x

It’s a day that has been years in the making.

The sale of recreational marijuana will begin Tuesday morning at two dispensaries in Massachusetts, more than two years after it was legalized for adults over the age of 21 by voters.

The businesses, both existing medical marijuana dispensaries, open at 8 a.m.

In the meantime, catch up on what you need to know: 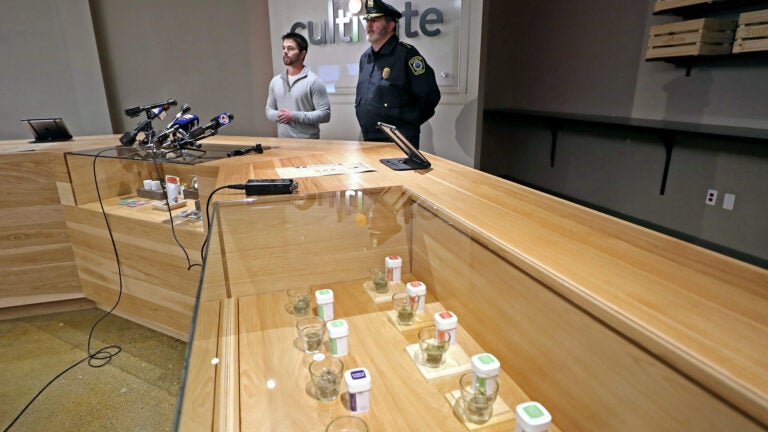