A black cloth now frames the door for Ladder 4 at the Webster Square Fire Station in Worcester.

Mourners have left bouquets in front of the building, the flowers piled high at the foot of the department’s flagpole — the flag flying at half-staff for a fallen colleague.

Christopher Roy, who served with the department for two-and-a-half years, died early Sunday while battling a five-alarm blaze at an apartment building in the city.

Condolences and messages of support from near and far have poured in for the Worcester community and the 36-year-old’s family, as friends and colleagues remember the firefighter for his love of his job.

Roy leaves behind a 9-year-old daughter, Ava, his parents, who are Worcester residents, and a brother, the department said in a statement.

Tim Harrold, who lived next door to the duplex where Roy lived with his daughter in Shrewsbury, said his neighbor was always friendly.

When Roy wasn’t working with the department, he could be seen doing yard work or spending time with his daughter, Harrold said.

“He was a pretty hard worker. He was a great dad. His daughter was always running around here,” he told the station.

Chris Wine, who attended Burncoat High School with Roy, told the Worcester Telegram & Gazette that his former classmate was overjoyed when he got the job with the Worcester Fire Department.

Roy’s love of, and dedication to, his job was evident, too, to Matthew Cadette, whose family owns the Shrewsbury Dunkin’ Donuts that the 36-year-old visited. Even before he was sworn in as a firefighter, the Worcester Fire Department was a frequent topic of conversation, Cadette told the Telegram & Gazette.

“Every day, our firefighters selflessly risk their lives without a second thought,” he said.

Roy’s body received a police escort Monday morning as it was transported from UMass Memorial Medical Center to the Office of the Chief Medical Examiner in Boston. Mourners gathered on overpasses along the route, parking firetrucks and draping flags to pay their respects to the fallen first responder.

We are incredibly humbled by the outpouring of love. For those who have graciously inquired about a fund for the family of Firefighter Christopher J. Roy, an official announcement is forthcoming from WFD & @WorcesterFD1009. Info to follow. Thank you for your generosity & patience

“Another hero to walk the streets of Heaven,” state police said in a statement.

Here’s what we know about the fire Roy is the eighth Worcester firefighter to die in the line of duty in 19 years, and his death comes as the department was commemorating the six lives lost in the 1999 Cold Storage Fire and remembering Jon D. Davies, who was killed fighting a blaze in 2011.

“Once again December has proven to be the cruelest month of the year for the Worcester Fire Department,” Mayor Petty said in a statement.

Roy was among the group of firefighters who responded to Sunday’s fire at a three-story, six-unit apartment building that eventually grew to a five-alarm inferno. According to the department, the blaze at 7 Lowell St. was initially reported at 3:58 a.m. as a fire in the basement.

Luis Santiago told the Telegram & Gazette that his aunt, who lives on the first floor of the building, woke up to find the floor was on fire. She then ran upstairs to the third floor to wake up his mother and help get everyone out of the building.

Once outside, all the residents of the building watched as firefighters tried to contain the blaze.

“It looked really bad,” Santiago told the newspaper. “The house was on fire, the windows were blowing out and it made its way up to the third floor and to the roof.”

According to MassLive, as the third alarm was called for the fire, officials ordered the firefighters out of the building. But from inside, it was reported that firefighters were trapped.

“Conditions deteriorated rapidly with heavy fire forcing several firefighters on the second floor to evacuate,” Petty said in his statement. “With the assistance of other crews and the Rapid Intervention Team, five firefighters escaped over ladders.”

Daniel Guilbault, who lives in a nearby building, watched as firefighters used the ladders to escape from a second-floor window, capturing the rescue on video.

“When they finally cut a hole, we could see a limp body,” he told the Telegram & Gazette. “They lowered him down real carefully. A bunch of firefighters on the bottom all surrounded, trying to do everything they could, trying to get out of the icy parking lot to get him to the hospital.”

Roy and another firefighter were rushed to a local hospital. The second firefighter has since been evaluated and released.

“Fire crews were heroic in their efforts to rescue their colleagues under extreme conditions,” Worcester Fire Chief Michael Lavoie said in a statement. “Every person on the fire-ground gave 110% to try to rescue the firefighters who were in danger.”

The cause of the fire remains under investigation by agencies including the Worcester police and fire departments, District Attorney Joseph Early Jr.’s office, and the state Fire Marshal’s office. 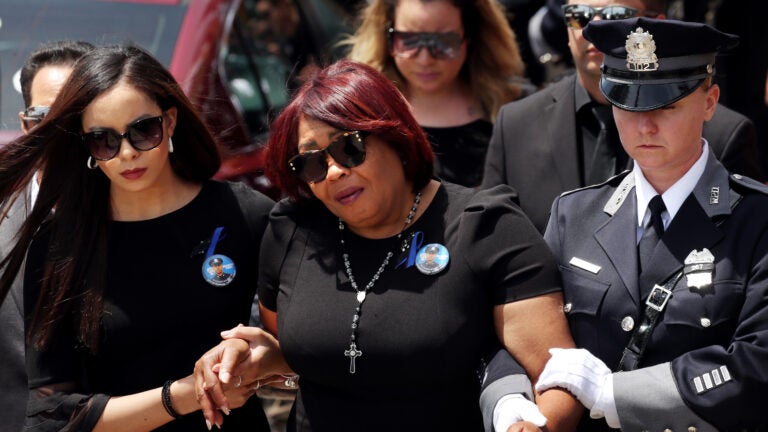 PHOTOS: Worcester service honors ‘Manny’ Familia, the officer who died trying to save a drowning boy