MONTPELIER, Vt. (AP) — Biologists are trying to determine whether a warm, dry fall is responsible for a drop in the number of landlocked Atlantic salmon that swam up a Lake Champlain tributary in Vermont to spawn this fall or if there could be other reasons behind a five-year decline.

U.S. Fish and Wildlife Service statistics found that 42 salmon were trapped at the Winooski River fish passage this fall at the dam between Burlington and the city of Winooski where technicians trap the fish and release them upstream so they can continue to their spawning grounds.

U.S. Fish and Wildlife Service biologist Nicholas Staats said biologists were looking at a variety of possible factors. There is also the possibility that parasitic lamprey once considered under control could be affecting the salmon population or if an increase of an invasive bait fish has affected the salmon’s ability to reproduce effectively.

“It’s never just one thing,” Staats said. “It’s usually a combination of factors that can contribute to lower numbers of adult returns.”

Only last year, Staats and other biologists were noting that salmon were naturally reproducing in Vermont’s Huntington and Winooski rivers, the destination for the salmon that are swimming up-stream, for the first time in 150 years.

Chet MacKenzie, a fisheries biologist with the Vermont Department of Fish and Wildlife, said he felt this season’s drop was most likely due to the weather. And he noted that while the number of salmon swimming up the Winooski is down, the number of salmon that returned this fall to a small river near a state fish hatchery in Grand Isle was about 400, more than double 2017.

“If you don’t have the right flow, it’s difficult to attract fish,” MacKenzie said.

He said the biologists will have a better idea what’s going on after all the information for the entire lake is studied.

The land-locked salmon in Lake Champlain are separate populations from the Atlantic salmon populations that return to rivers in Maine. But those return numbers there vary as well.

The most productive river for the salmon in the East Coast is Maine’s Penobscot River, the only U.S. state left with native Atlantic salmon populations.

Whatever the reason for the decline, Lake Champlain fishing guide Brian Dunkling said he’s noticed the drop. He blamed what he sees as an overabundance of double crested cormorants, birds which prey on young fish, and the arrival of the spiny water flea, an invasive species that can clog fishing gear.

“The year that we had really good salmon fishing, we could catch six or eight salmon and eight or 10 lake trout in a six-hour trip,” said Dunkling, the owner of Sure Strike Charters of Shelburne. “It’s been going steadily downhill ever since.”

Biologists aren’t sure what’s up, but they are paying attention.

“There is definitely something going on there that we have to pay attention to,” Staats said. 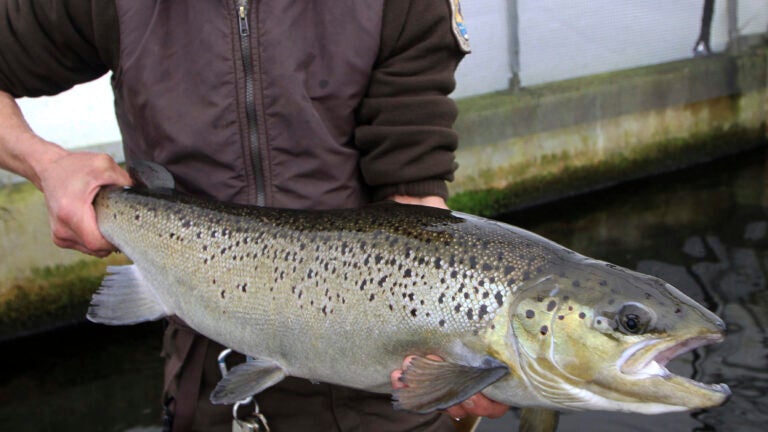