Marathon bombing survivor Adrianne Haslet, who was seriously injured when she was hit by a car in the Bay Bay last weekend, said on Instagram she will be discharged from the hospital Friday night.

“I’ll go by ambulance to in-patient rehab, where I’ll be for weeks,” she wrote in an Instagram story on Thursday. “I’ll spend all day working; learn how to cook, shower, dress, put my leg on, all one handed. I’ll learn how to work out without compromising my injuries, and go to therapy for (even more) PTSD, basically working on me eight hours a day.”

Haslet was in a crosswalk near 311 Comm. Ave. on Saturday when she was hit. The driver remained at the scene and was cited for failing to stop for a pedestrian in a crosswalk. She says she has undergone multiple surgeries since then.

Adrianne Haslet shared a photo of her shoulder in an Instagram story on Friday.

The Seattle native had been training to run the 2019 Boston Marathon, and she has said that while she isn’t sure if she’ll be cleared to participate in the April race, her “head is staying in the game.”

Haslet is one of the 17 people who lost a limb in the 2013 bombing. A ballroom dancer, she has since continued to both perform and run, appearing on “Dancing with the Stars” and crossing the finish line of the 2016 Boston Marathon as a runner.

She ran the race again in 2018, but the frigid temperatures and rain forced her to stop.

On Thursday, Haslet answered questions about the crash from her followers, sharing that her shoulder had to be “rebuilt with plates and screws.”

“My lower body was hit, but on my prosthetic, so it’s being examined to see if it needs to be replaced,” she wrote. “I also hit other areas but they’re internal, bleeding, bruising.”

She said she’d just left her home and was crossing with the light when she was hit, just over halfway across the street. She didn’t see a car when she checked before crossing.

“The car was going really fast and hit me hard,” Haslet wrote. “I went into the air, flipped upside down, and landed in the middle of the street on my left side. I screamed until medics arrived. The driver did stop.”

In a video, she told followers that she was still in pain and “so upset” about her circumstances.

“I will have more specifics about time frames soon, but I know right now I am not moving that shoulder or my arm for a solid six weeks, not even a centimeter of movement,” Haslet said. “That means that for now I’m just taking the time I need to get better, be patient with all the moods that I have that come with trauma. It’s not easy, but I have a great support system, taking it day by day.” 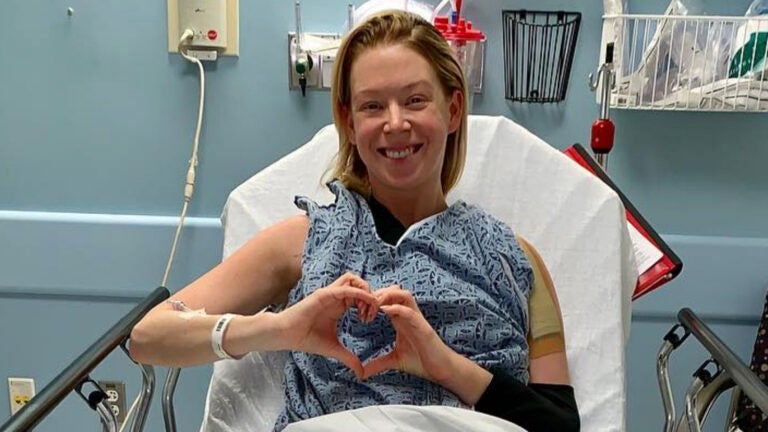