The rare great black hawk that captured hearts and attention when it turned up in Maine last year was euthanized on Thursday.

The raptor, which is native to Central and South America, had been in the care of Avian Haven, a wild bird rehabilitation center, for almost two weeks. A man found it on the ground in Portland, Maine, and it was unable to move due to frostbite on its legs.

Since being taken in, the bird of prey’s condition continued to deteriorate.

Avian Haven wrote Thursday that tests revealed the hawk had no circulation in its feet or lower legs, which were starting to decompose from the frostbite.

“The goal of frostbite treatment is to limit further tissue death, though the success or failure of those efforts may not be apparent for several weeks or even months,” the center said. “Based on how rapidly the hawk’s feet deteriorated, we suspect that the initial frostbite damage occurred well before the bird was found on the ground on January 20, when frozen feet and associated pain had likely resulted in an inability to perch. Although he may not have appeared to be in distress in the few days prior to his rescue, any injured wild animal will hide discomfort until unable to compensate.”

Despite the group’s best efforts to treat the injuries, the hawk’s legs had already been “irreparably damaged.”

The hope, they said, had been that the frostbite was minor and could be released. And once it became how bad the bird’s injuries were, Avian Haven said experts discussed the possibilities for prosthetics and “captive placement,” neither of which were determined to be realistic for the rare hawk.

“The wildlife professionals who met [Wednesday] all agreed that the Great Black Hawk would never successfully adapt to captivity, especially without even one foot that could be used in a natural way to perch, grasp food, or land successfully after flight,” the group wrote. “The decision to euthanize was completely unanimous among all who gathered here yesterday, though that decision was tinged with regret, sorrow, even heartbreak. It was seen by some of us as an end of suffering, and by others as the release of a spirit from its hopelessly damaged shell. Either way, all of us believed it was the only course of action that was fair to the hawk.”

The birding community, which had flocked to Maine to spot the rare hawk when it appeared in Vacationland in August, reacted with grief to the news.

“The joy and wonder this incredible bird inspired in the thousands of Mainers fortunate enough to see it and know its story will not be forgotten,” Maine Audubon wrote.

Thousands commented on the announcement from Avian Haven, thanking the group for the care they provided the hawk.

“Thank you to all who cared for him,” Rita O’Connor Maines commented. “Fly free Great Black Hawk. Maine loved you deeply. Your spirit will live on with all of us!!”

It was believed to be only the second great black hawk ever spotted in the United States. The first time was in the spring of 2018 in Texas.

Read the full statement from Avian Haven below. 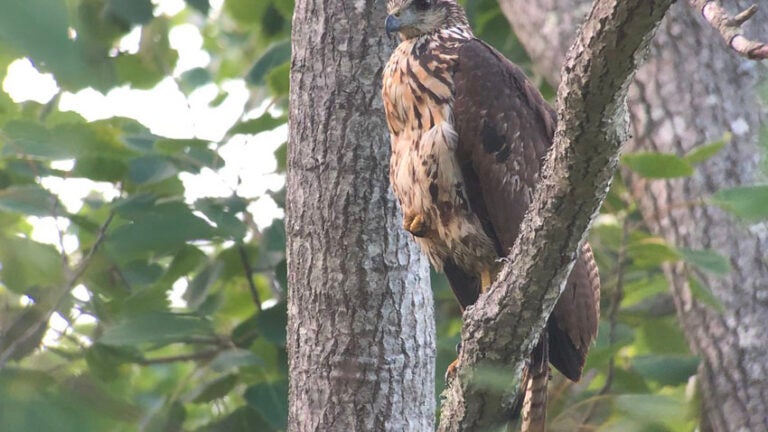 It’s only been spotted once before in the U.S. Now birders are flocking to Maine to spot a rare hawk.