Colin McGrath and his sister, Sloan, were on their way home after a “wonderful day” at the park near their South Boston home in July when two cars collided in the street. One of the vehicles jumped onto the sidewalk and crashed into the stroller carrying the almost 3-year-old.

The boy, who his family said was always playing, asking questions, and dancing, was killed. His then-4-year-old sister was injured; their nanny wasn’t hurt.

South Boston residents immediately rallied around the McGrath family, tying blue ribbons along the neighborhood’s streets in his memory before his funeral. Now, the toddler’s family says they want to give back to the community that supported them through a nonprofit named for their son — Colin’s Joy Project.

“You realize that you need to figure out how to have a relationship with them after their life here,” Colin’s mother, Kerri McGrath, told CBS Boston. “And Colin’s Joy Project has allowed us to have that relationship with him and continue that, but also make the most of those memories that we have.”

The mission of Colin’s Joy Project is to “enhance play spaces and sponsor children and family programming in our community, particularly for families in need.”

The McGraths told CBS Boston that through the project, they are already planning two new playgrounds in South Boston and a reading area near where the crash happened, honoring their son’s love of parks and libraries.

“The community has been great for us and we want to sort of show them our appreciation and we want to do it throughout what would have been Colin’s life,” the boy’s father, Brendan McGrath, said.

The logo for Colin’s Joy Project includes their son’s handprint.

This is Colin McGrath.

In July, two cars collided in South #Boston. One went up on the sidewalk. Colin was killed.

See my interview on #WBZ at 11 pic.twitter.com/ueGxvNBBST

Colin’s mom and a team of 10 will be running the 2019 Boston Marathon to raise money for the nonprofit. A fundraising page for Kerri McGrath has already raised more than $31,000.

“To know that I’m doing it for him, no hill or joint pain or muscle ache will ever compare to the pain that we’ve gone through,” she told CBS Boston of preparing for the race. “So it’s a little bit of like, ‘Bring it on,’ a little. You can’t hurt me any more than I’ve already been hurt.” 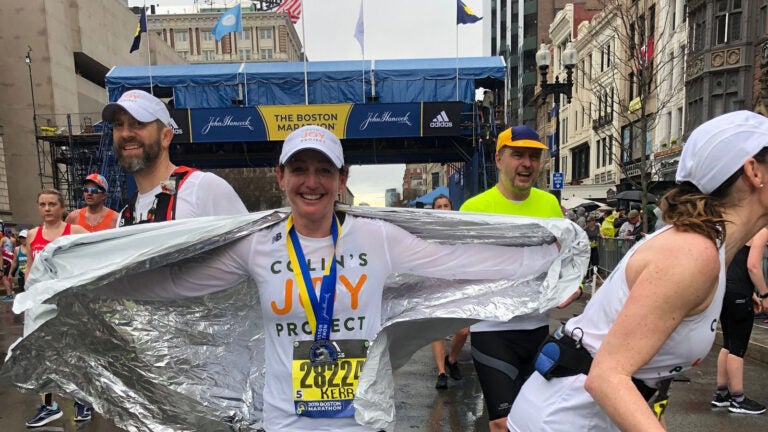 The Boston Marathon is complete. But for Kerri McGrath and her family the journey isn’t over.