Sitting on a bus in Boston, thousands of miles from her home in Hong Kong, college student Frances Hui crossed paths with an inquisitive fellow passenger.

Where are you from? the passenger pressed.

When she eventually replied “Hong Kong,” the man started to get aggressive, Hui recounted. He insisted that she should define herself as “from China” – which was handed control of the former British colony in 1997.

“He kept telling me, ‘You are Chinese, you need to fix your identity,’ ” Hui, a junior at Emerson College, said in an interview. “I felt really insulted. Identity is really personal. It is my thing.”

Hui penned a column at Emerson’s student paper, titled “I am from Hong Kong, not China.” She opened with the line: “I am from a city owned by a country I don’t belong to.”

It was soon followed by an intense and, at times, threatening backlash from mainland Chinese students at her college.

The squabble was far from Hong Kong, but one that reflects wider questions playing out in the ex-colony over identity amid the rapid erosion of the territory’s autonomy and promised “one country, two systems” relationship.

Five years after massive street protests in Hong Kong over Beijing’s controls, China has steadily tightened its grip over the territory and its young pro-democracy movement. Many now worry they are witnessing an accelerated end of Hong Kong’s special status, including its political and business freedoms.

And they wonder how to respond – raising the possibility of more protests.

The terms of Britain’s handover were meant to guarantee Hong Kong a high degree of autonomy, allowing the territory to keep its own political, judicial and economic systems until 2047.

But Beijing’s controls stepped up after the 2014 street protests, which saw hundreds of thousands of people take to the streets for months in one of the biggest acts of defiance against China’s Communist Party in decades. Protesters hoped to extend democratic rights and end plans for China to vet candidates for the city’s top job.

In recent months, Hong Kong courts have charged and imprisoned the pro-democracy movement’s leaders for up to 16 months despite the protests being overwhelmingly peaceful. An appeals court on Thursday ruled that 22-year-old Joshua Wong, one of the movement’s symbols, will return to prison.

Last year, a party that advocates for Hong Kong’s independence was banned, and a senior Financial Times editor was expelled. No official explanation was given for the editor’s expulsion, but he had hosted a talk with the founder of that independence party just weeks before at the Foreign Correspondents’ Club.

The Hong Kong government also is pushing through a bill that would make insulting the Chinese national anthem a criminal offense. All over Hong Kong, advertisements and posters market the “Greater Bay Area,” a Beijing-driven plan that will draw the city closer to the mainland.

Most controversially, the Hong Kong government is pushing for an extradition bill that would allow fugitives to be transferred from the enclave to any jurisdiction in the world, even without a formal agreement – effectively extending Beijing’s powers into Hong Kong.

Hong Kong’s legislature descended into chaos on May 11 over the bill. Scuffles broke out between lawmakers, and one was taken to a hospital.

A congressional commission in Washington said the extradition law, if it were to pass, “could create serious risks for U.S. national security and economic interests in the territory” and could violate a U.S.-Hong Kong act that allows Washington to treat the city as separate from China.

“At the heart of every one of these projects and efforts is a political calculation on the part of Beijing, who is asking: What can we do to diminish Hong Kong as a place,” said Jeffrey Ngo, a Hong Kong democracy activist and PhD candidate at Georgetown University. “It is really sad, but it has certainly motivated people to assert, even more strongly, the Hong Kong identity.”

Earlier this month in Washington, a congressional hearing was held on the future of Hong Kong’s independence and how the U.S. government should respond. Live-streamed on YouTube, commenters flooded a chat box while the live video was streaming with comments such as “Hong Kong is not China” and “free Hong Kong.”

Against this backdrop, Hui’s piece published in late April on the website of the Emerson College newspaper, the Berkley Beacon. It cited experiences of students like her from Hong Kong, Taiwan, Tibet and other places that have struggled to assert themselves against China.

A Taiwanese friend, she wrote, felt compelled to adopt a “Chinese” identity despite her love for Taiwan, too afraid to “fight over her identity” with her Chinese friends.

Articles in the student paper usually get anywhere between 20 to 40 views. Hui’s piece quickly went viral – attracting hundreds of comments and thousands of readers.

“I got a lot of attention, which I really did not expect,” Hui said.

Students from Hong Kong, Taiwan and other places like Singapore reached out with messages of support and encouragement, she said. Among them was Natalie Law, a 22-year-old Hong Kong student at Boston University, who connected to Hui over Instagram. They have since become friends.

“She can speak up for all of us, or maybe a majority of us [who are worried about Hong Kong],” Law said.

The article started appearing all over Chinese forums including the messaging app WeChat, shared on Facebook and Instagram pages and distributed among students far from Boston. Chinese students started tagging her social media accounts, with comments like “shame on you” and “your parents should be ashamed of you.”

Someone in a WeChat group with over 200 Chinese students called her a “psycho,” and another said they had seen her around campus and noticed she was “a short girl” who did not have any real power.

“It made me feel really uncomfortable, like I was being monitored,” she said.

The most jarring comment came from a Chinese student at Emerson, who made Hui’s personal Facebook posts public. In one post, he wrote a comment that translates to: “Whomever opposes my greatest China, no matter how far they are, must be executed.”

“I was panicking,” she said.

Hui has not been physically harmed in any way since her article’s publication.

Her experience, however, mirrors that of other Hong Kongers at overseas universities.

Kacey Wong, a visual artist in Hong Kong, remembers pockets of protests at an exhibition he participated in last year at the University of Essex outside London. Works on display centered around Hong Kong’s 2014 Umbrella Revolution – named for the umbrellas carried by many protesters – and showed photos of police hostility.

“They said my exhibition was biased. They asked why we only showed students beaten up by the police officers and not the other way around,” Wong said. “They created Facebook groups in protests. It seems like pretty standard procedure.”

Hui was a student activist when she was in Hong Kong, along with countless other young people who were inspired by leaders like Joshua Wong, who was only 17 at the time of the protests.

“It was the moment of renaissance,” Wong said.

Yet, the pressure on Hong Kong and its quest for greater freedoms has only intensified.

“It is like trying to fight the weather,” Wong said. “What can you do? Maybe you can bring an umbrella or wear a raincoat, but you can’t shout at the sky and tell it to stop raining.” 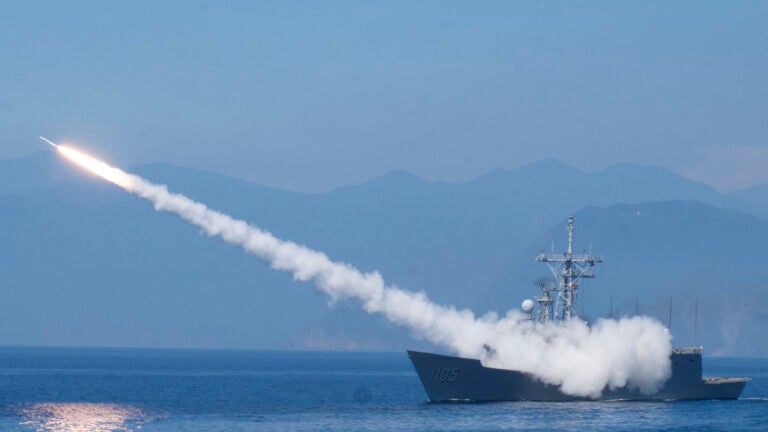 Why is a Nancy Pelosi visit to Taiwan causing tension? What to know.