CONCORD, N.H. (AP) — A blind man faces trial next month on charges that he stole crackers, corned beef and other low-cost items from a New Hampshire Walmart while using the store’s self-checkout kiosks.

Andrew Airey, 39, of Conway, was initially accused of stealing a bag of oyster crackers when he arrested last July 3 after shopping with his 7-year-old daughter. After he threatened to sue Walmart over how he was treated by store employees, he was subsequently charged with four additional counts of misdemeanor theft alleging that he stole a frozen pizza, a can of corned beef, a bath towel and a package of toothbrushes in earlier, separate visits to the store, according to his attorney.

In court documents, attorney Alfred Catalfo calls his client “perhaps the least likely person to even be capable of committing an act of willful concealment,” given that Walmart employees frequently help Airey with purchases, including some of the transactions in question.

He argues that the kiosks don’t provide sufficient audio prompts and, during the July trip, “timed out” several times because Airey didn’t scan items fast enough. That resulted in three separate receipts, all of which were checked by Walmart employees before he was arrested, Catalfo said.

“Our criminal code states that a person is not guilty of an offense unless he commits a voluntary act, or the voluntary omission of an act, of which he is physically capable,” he said Monday. “There was no intent here nor is Mr. Airey physically capable of committing this offense.”

Walmart said it acted in “good faith” in reporting what happened to law enforcement.

“They investigated and referred the case to the prosecutor,” said Casey Staheli, a media relations manager for the company.

A judge last week refused to dismiss the charges but granted Airey’s request seeking additional video footage from the store that might show employees checking Airey’s receipts or assisting him during earlier visits. His trial’s scheduled for July 26.

According to Airey, Walmart employees treated him in an aggressive manner, refusing to allow him to call his wife who was waiting outside and asking him: “If you’re blind, why doesn’t someone else do your shopping? Why doesn’t your wife just do it?”

“The answer is that this was one of the few things my client could still do for his family,” said Catalfo.

In October, the National Federation of the Blind sued Walmart on behalf of three blind Maryland residents arguing that the self-checkout kiosks don’t fully comply with the Americans with Disabilities Act. In response to that suit, the company said it doesn’t tolerate discrimination and believe its checkout procedures comply with the law.

A spokesman for the federation said Monday that it had provided Airey with basic information about the litigation at his request but otherwise had no comment on his case. 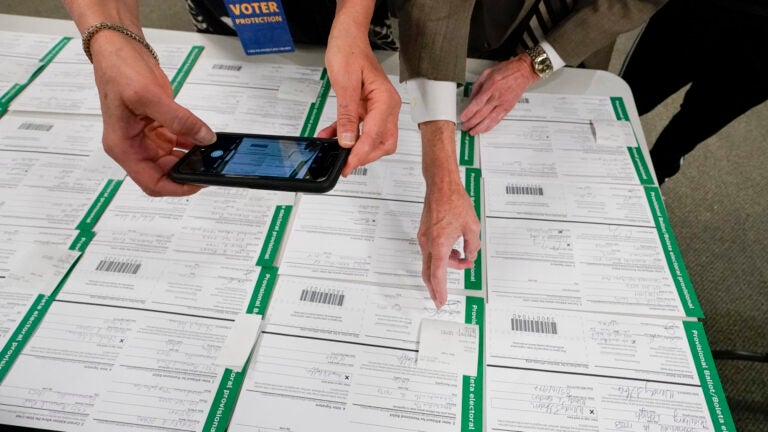