Over the last month, PawSox officials have begun to reveal what that exactly could mean.

Rea says they’re currently “knee deep” in the planning efforts for the future home of the Red Sox Triple-A affiliate, who will begin playing in Worcester in 2021. The team announced the move last August, along with plans to build a 10,000-seat stadium in Worcester’s Canal District as part of a development project that includes restaurants, apartments, and a hotel overlooking the ballpark.

PawSox officials plan to break ground on the ballpark this summer and have hosted several preview nights at McCoy Stadium to discuss design ideas with fans. PawSox President Charles Steinberg reportedly carries around a notebook with more than 760 suggestions and counting.

“One consistent theme has been the Worcester-ization of the ballpark,” Rea said.

“We want people to be able to have Coors and Miller and Bud, but also have the local flare that I think the Worcester and Central Mass. area is becoming known for,” Rea said.

But the featuring of local businesses is also expected to extend beyond alcohol. Given the park’s naming rights, fans can expect the Worcester-based beverage company’s cult favorite seltzer drinks to be in no short supply. Worcester’s other iconic culinary brands, like Table Talk Pies and Coney Island Hot Dogs, are “all in the ballpark in some way, shape or form,” team chairman Larry Lucchino told CBS Boston last month.

In addition to nods to the team’s half-century history in Pawtucket, Rea says they’re also planning to integrate Worcester’s rich baseball past inside the park.

The city briefly had a National League team named the Worcesters from 1880 to 1882 (as well as a number of minor league teams over the course of the next century). In fact, Worcester pitcher Lee Richmond threw the first perfect game in major league history in 1880 at a park at the city’s agricultural fairgrounds. Ted Williams even hit his first home run as a member of the Red Sox in Worcester during an exhibition game against Holy Cross.

“People have emphasized, again and again, make it Worcester-specific and make it feel like Worcester when you walk through this ballpark,” Rea said.

According to the park’s master plan, there’s even designs for an old-fashioned dining car in the center-field pavilion, though the features at that level of detail are still being worked out.

“Suffice it to say we want many features in and around the ballpark that are evocative of Worcester culture and cuisine,” Rea said. 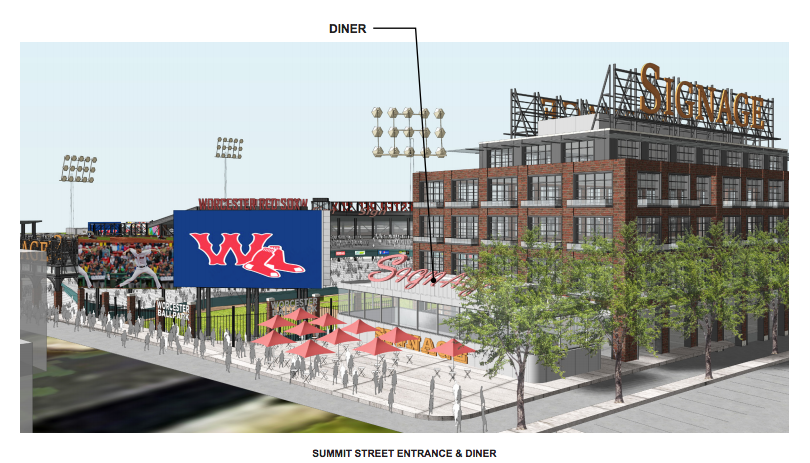 A rendering of a dining car on the outfield promenade at Polar Park.

If there’s a second guiding principle to their plans, it’s the Fenway-ization of Polar Park.

D’Agostino Izzo Quirk Architects, the Somerville firm tasked with designing the ballpark, is the same company that has been leading the ongoing renovations to modernize Fenway Park dating back nearly two decades.

Similar to the major league ballpark in Boston, the Polar Park property is somewhat constrained by its allotted six-acre urban parcel surrounded by planned development. Rea says that choice was made intentionally in the hope that it results in the sort of cozy ballpark experience fans enjoy at Fenway.

“I don’t think there’s anything more disconcerting as a fan when you go to a ballpark and you’re sitting in a cavernous place with no sense of intimacy,” he said. “Fenway has been so successful because, among other reasons, there’s an intimate cozy experience there.”

“We want a ballpark that has Fenway charm, but with the modern amenities that you expect from a 21st century ballpark.”

Similar to Fenway, team officials are planning to have entrances all around Polar Park, so that fans can enter from different angles and the “full circumference of the venue is busy and activated,” Rea said. The park will also be built into a hill. So while fans entering the home-plate side on Madison Street would come in on street level, those coming from the direction of Worcester’s lively Green Street restaurant and bar scene would actually walk down into the stadium from center and right field (think Baltimore’s Camden Yards with a Jersey Street-type scene above the outfield seats).

“We’ll essentially be building a bit of a bowl-like structure that’s tucked into the slope,” Rea said.

The sloped nature of the site — a roughly 40 to 50 foot grade change from one end to another — also lends itself to another potential Fenway-like quirk, though Rea remained coy about what exactly could be in store. 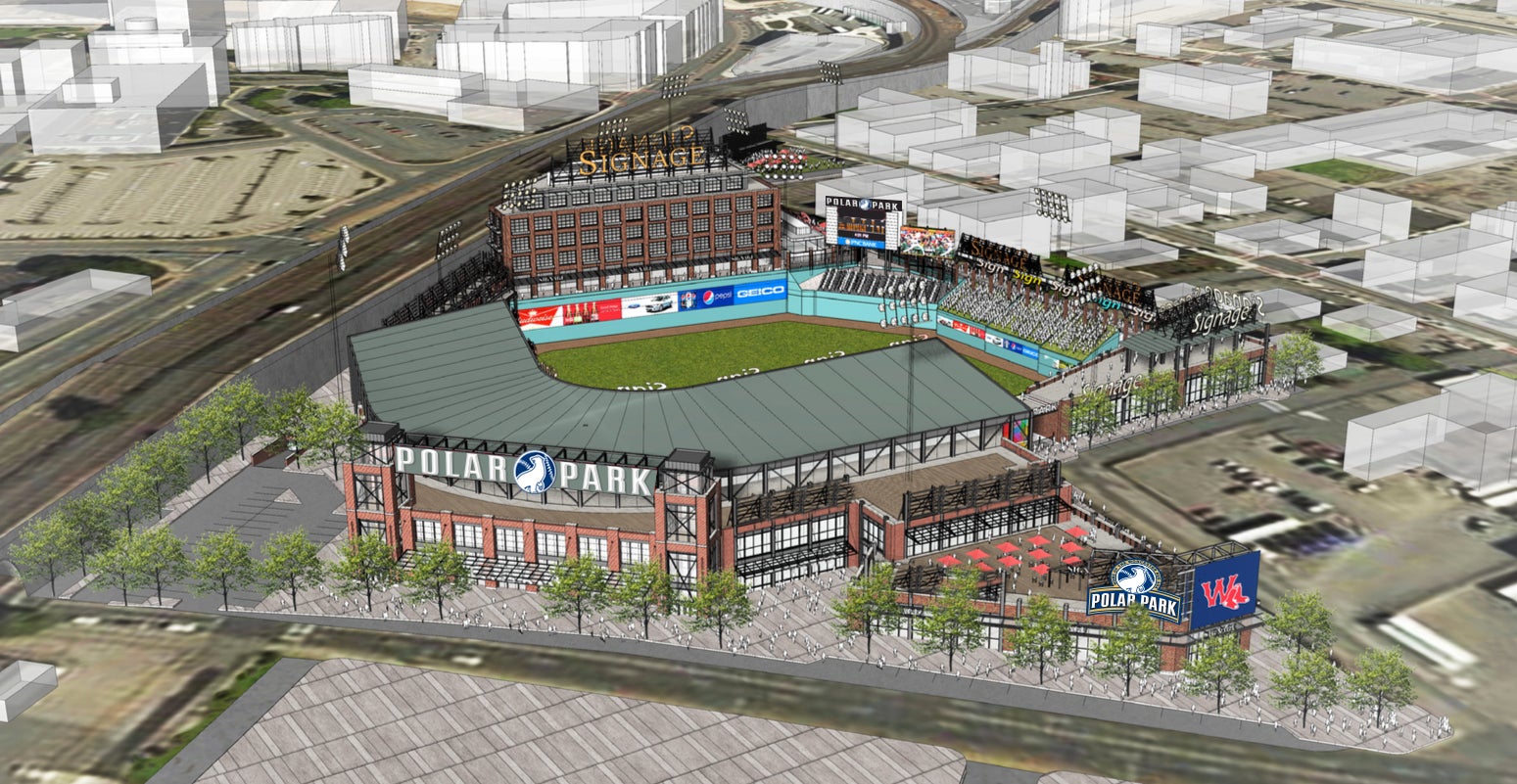 Polar Park won’t just be a Fenway replica with a touch of Worcester. The team also enters the building process at a time when even minor league ballparks are constantly trying to one-up each other with more modern features and technology. According to the Worcester Business Journal, it will be the fourth-most expensive minor league park ever built when adjusted for inflation.

“We want a ballpark that has Fenway charm, but with the modern amenities that you expect from a 21st century ballpark,” Rea said.

The team is partnering with Worcester Polytechnic Institute — beginning next school year and continuing through 2023 — to develop and incorporate the latest technology into the park. Rea says they’re considering building out an app to help fans manage parking, find a particular concession, or alert them to a promotion.

“We’re talking about some really cool aspects of the ballpark that will be technologically savvy and 21st century in nature, and working with the local academic community to realize those opportunities,” Rea said.

Around 7,200 to 7,500 of the park’s 10,000-person capacity will be traditional, fixed ballpark seats, Steinberg said at a fan preview night in Pawtucket last month. The rest will be flexible seating and social areas catering toward younger fans and families. Rea thinks such gathering spaces will be key for attracting students from the 13 colleges in the Worcester area, who have reportedly complained about not having anywhere to mingle with each other.

“If we want to bring in kids from Holy Cross and Assumption and WPI and Clark and the other schools in the area, we need to have these areas that are appealing to millennials, to people who want to go as much for a social experience these days quite frankly as for a ball game,” Rea said. 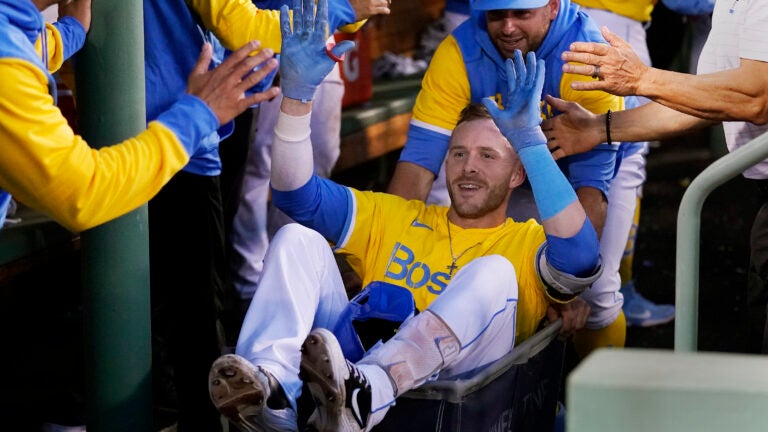