The head of the state’s Registry of Motor Vehicles, Erin Deveney, resigned Tuesday following revelations that the West Springfield truck driver accused of killing seven motorcycle riders in New Hampshire last week had been charged with drunk driving in Connecticut in May, part of a long history of infractions.

State officials said Volodymyr Zhukovskyy, who is charged with negligent homicide in the fiery crash, should have lost his commercial license after the Connecticut incident, but the registry failed to act, allowing the 23-year-old to remain on the road.

“In this case, the RMV had not acted on information provided by the Connecticut Department of Motor Vehicles about a May 11 incident that should have triggered termination of this individual’s commercial driver’s license,’’ Stephanie Pollack, the state’s transportation secretary, said in a statement Tuesday night.

Jamey Tesler, the state transportation’s department’s former chief operating officer, will take over as acting registrar, Pollack said. Tesler will lead a review to “ensure the RMV acts as quickly as possible on any information shared by other states,’’ she said.

The May 11 incident happened in East Windsor, Conn., where police were called to a Walmart parking lot to investigate a report of a man, later identified as Zhukovskyy, “revving his truck engine and jumping around outside the vehicle.’’

During his arrest, Zhukovskyy made “suicidal comments’’ and displayed “extreme behavior,’’ police said. Based on his performance during a field sobriety test, Zhukovskyy was arrested for allegedly operating a motor vehicle under the influence of drugs or alcohol, records show. His lawyer in that case has said Zhukovskyy denied the charge.

He refused a chemical test, Massachusetts officials said, which should have resulted in the termination of his commercial license. But Connecticut “failed to provide sufficient information’’ about the arrest through the federal system for Massachusetts to record the violation, Pollack said.

The Connecticut Department of Motor Vehicles did not respond to requests for comment Tuesday.

The state’s DMV contacted the Massachusetts registry about the offense on May 29, but the message “did not contain sufficient information to automatically input Zhukovskyy’s OUI into his Massachusetts driving record,’’ Pollack said.

It did, however, generate a notification for a manual review, which registry personnel in Massachusetts did not conduct.

“Which is why the May 11 chemical test refusal does not appear on Zhukovskyy’s driving record and why his license had not been suspended in Massachusetts,’’ Pollack said.

Deveney was named interim registrar in 2015. She had previously served as interim commissioner of the state’s Department of Children and Families.

The state transportation department did not say whether any RMV employee will face discipline or termination.

Sarah Finlaw, a spokeswoman for Governor Charlie Baker, said Baker and Lieutenant Governor Karyn Polito had ordered an immediate review of the information-sharing with other states.

“The administration will take all necessary steps to ensure the Registry is appropriately handling all data shared between states,’’ the spokeswoman said.

Last Friday, the pickup truck Zhukovskyy was driving crossed the median on a rural two-lane highway in Randolph, N.H., and crashed head-on into a group of motorcyclists, authorities said.

Zhukovskyy had begun working for Westfield Transport three days before the crash, the company’s owner, Dartanyan Gasanov, told the Globe this week, adding that he wasn’t aware of Zhukovskyy having driving issues in the past.

In a bail order on Tuesday, Judge Peter H. Bornstein wrote that Zhukovskyy’s “criminal and driving history exhibit a pattern of operating a motor vehicle in a dangerous manner. If released, he will likely present a danger to the safety of defendant or the public.’’

Officials allege that Zhukovskyy was driving erratically before the crash.

“There is no closure,’’ she said in a brief interview. “I know that people say there are many stages of grief . . . right now we are just mourning my husband.’’

The couple was married 27 years.

Just 18 days before the New Hampshire crash, the car carrier Zhukovskyy was driving rolled over on a Texas highway, authorities said Tuesday.

Zhukovskyy told police in Baytown, Texas, that he had overcorrected after trying to maneuver around a car that had cut him off. Police could not locate the vehicle Zhukovskyy said cut him off, said Baytown police Lieutenant Steve Dorris. The truck was carrying five cars at the time.

Zhukovskyy was uninjured in the June 3 crash and was not cited by police, Dorris said. The truck he was driving was owned by a Westfield, Mass., company called FBI Express Inc., Dorris said. Zhukovskyy did not appear to be under the influence of drugs or alcohol at the time, Dorris said.

The incident was first reported by WCVB-TV. In February, Zhukovskyy was arrested at a Denny’s restaurant in Baytown along Interstate 10, near the spot of his rollover. Police were called to the restaurant around 2 a.m. after Zhukovskyy showed strange behavior while seated at the counter, Dorris said.

Zhukovskyy was unsteady on his feet and his pupils were dilated. Officers said it was “pretty clear he was intoxicated,’’ Dorris said. They found that Zhukovskyy was carrying a crack pipe when they patted him down, Dorris said. He was charged with possession of drug paraphernalia. 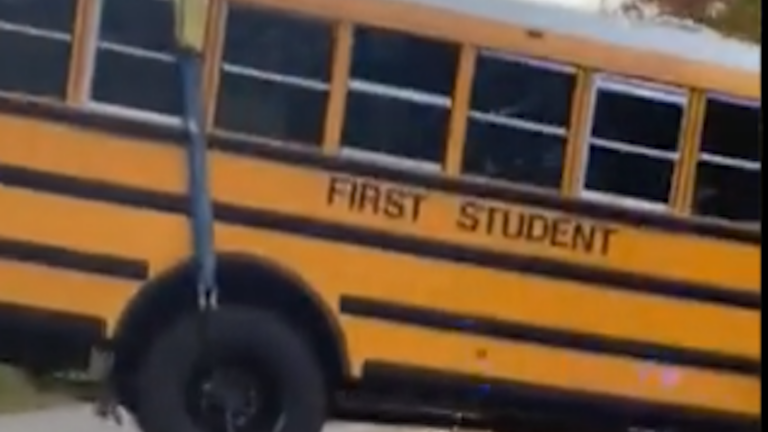 School bus with six children on board crashes into woods in Plaistow, N.H.