It’s a project that’s been years in the making, but officials hope the Christian Science Plaza rehabilitation will be “substantially complete” by the end of 2019.

That includes the plaza’s iconic reflecting pool. Though it’s sat empty for about two years, the pool could be refilled by the end of July, First Church of Christ, Scientist officials said in a statement.

“The Christian Science Plaza is designed to be a welcoming place for families, neighbors, and visitors,” officials said. “We know that many of our neighbors pass through it on a daily basis, so we look forward to completing the construction and renovation as soon as possible, while still maintaining a high standard of quality.” 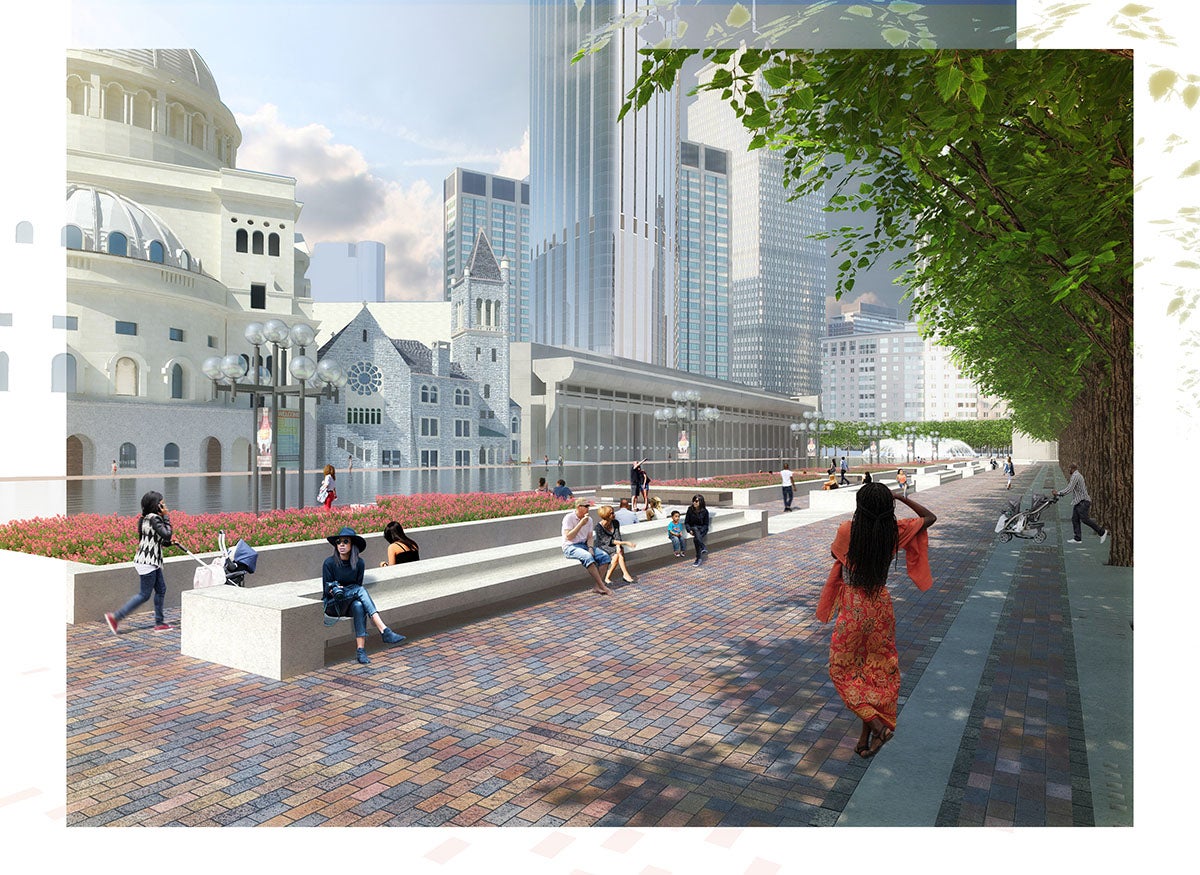 A rendering of seating along the reflecting pool.

Plans to revitalize the area were first announced in 2006, according to the Boston Planning and Development Agency. A central aspect of the project has been rebuilding the reflecting pool, which leaked into the parking garage below. The changes make the pool shallower, and new granite pavers “provide year-round beauty” even when it’s empty.

Other additions to the plaza include increasing green space, and making sure the area is clearly marked and easily accessible from all entrances.

Now, Robert Herlinger, the project’s chief architect and strategist, said crews have just a handful of tasks to complete, including refinishing the reflecting pool’s granite pavers and then refilling it with water. He said they also need to finish up a “beach area” at the corner of Belvidere Street and Huntington Avenue.

“The design solution has transformed what was an identity-less, non-directional, large brick paved area at the corner of Belvidere and Huntington Avenues, into a strong, welcoming plaza arrival zone, providing both a clear entry pathway as well as a functional, relaxing grass ‘beach’ area,” Herlinger said in an email. “A restful relief to the active nature around the children’s fountain.” 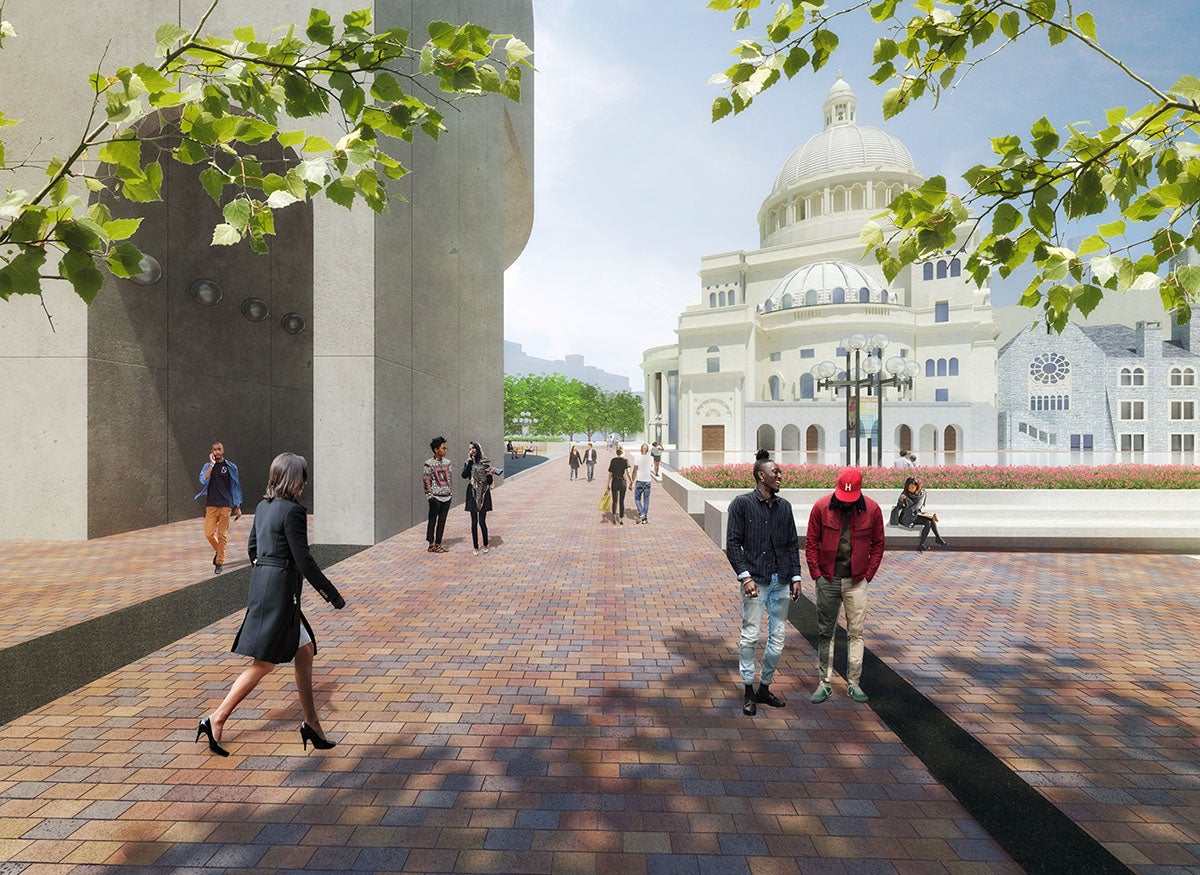 A rendering of the Christian Science Plaza near the reflecting pool.

While remaining construction continues, the children’s fountain is open, according to church officials.

“As one of our initial fence signs stated at the start of the construction, ‘We are renewing our buildings and walkways, replanting our lawns and flower boxes, and remaining a welcoming space for our community,’” the statement said.

These aren’t the only changes for the area over the last few years. The First Church of Christ, Scientist once owned a couple of parcels of land near the Plaza which were sold to Carpenter & Co. in 2014, according to the Boston Business Journal. One has since become the new Four Seasons Hotel. 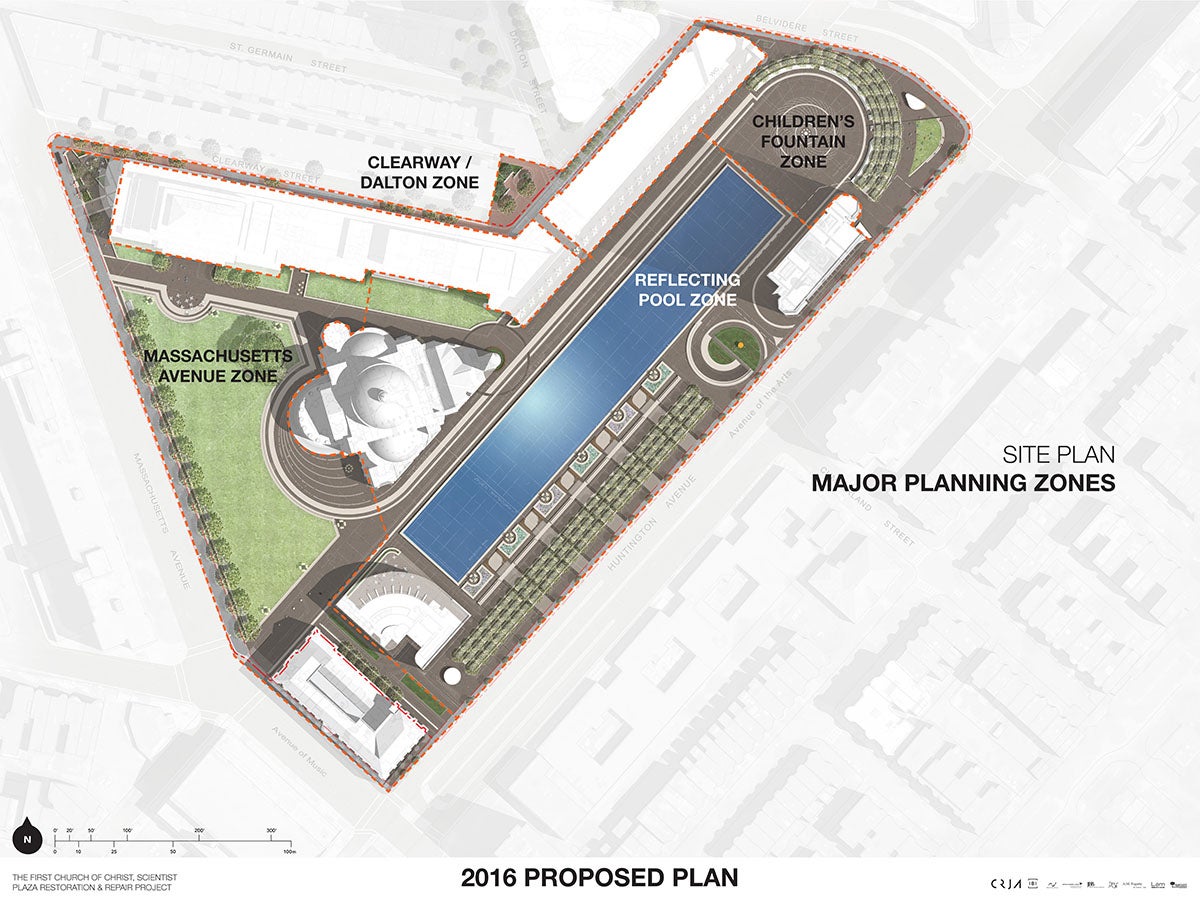 An overhead rendering of the Christian Science Plaza revitalization project.