Researchers are hoping to learn more about how great whites interact from a new video that captured two sharks crossing paths off Cape Cod on Monday.

FIRST FOOTAGE EVER! Drone footage of an interaction between two white sharks off the coast of Chatham yesterday, taken by Nate Jensen. Our local shark science team is hoping to see the high res version to learn more about the interaction. pic.twitter.com/L0cRedh7fv

The two great whites were spotted off the coast of Chatham by Nate Jensen using a drone, according to the Cape Cod-based nonprofit.

“Based on scarring patterns and wounds, we know that white sharks off Cape Cod frequently bite each other,” Greg Skomal, the senior fisheries scientist for the state Department of Fish and Game who leads the Massachusetts Shark Research Program, told Boston.com in a statement. “However, until this video was shot, we had never actually witnessed any kind of social interaction. The video shows a smaller white shark approach and make contact with a larger white shark, which quickly left the area. We are now examining the video more closely to determine if this was aggressive and/or defensive behavior or, perhaps, associated with mating.”

The conservancy also said Monday was a “busy day” for the shark researchers who were out on the water. Skomal, working with the conservancy, tagged two white sharks off Nauset Beach and one off Chatham. The researchers also witnessed two predations off Monomoy.

According to Sharktivity, the conservancy’s free app that provides information on white shark sightings and movements, there have been 11 sightings of the sharks off the Cape coast in the last 48 hours. 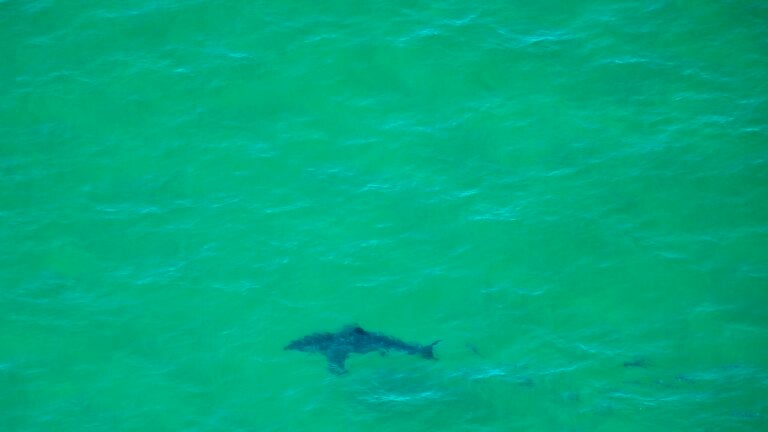