The ever-growing list of potential ways Cape Cod beaches can beef-up their response to shark sightings has gotten a little bit longer.

The latest idea pitched to Barnstable County officials this week involves installing industrial speakers that could broadcast water evacuation alerts to swimmers, surfers, and bathers, with siren tones that can be heard up to two miles away.

Right now, the warning calls from handheld megaphones can only reach so far from the lifeguard stand, according to Robert McLaughlin, a sales manager for Boston-based Acoustic Technology Inc., or ATI Systems.

“The idea is, if your head is above the water, you will hear this,” McLaughlin told the Barnstable County commissioners Wednesday. “These are large industrial speakers and it allows you precious moments to get the alert, understand there’s danger, and get out of the water. That’s what this is for.”

The proposal is among several pitched after two serious shark attacks last year, one of them fatal. Lawmakers are working to improve cellphone service on remote beaches, while first responders have stocked up on first aid training and supplies.

This spring, 911 call boxes were slated to be installed at beaches along with new shark warning signage, among other additions and efforts, officials have said.

The Bourne-based Woods Hole Group, meanwhile, was tasked by Cape towns and Cape Cod National Seashore officials with studying how to curb human and shark interactions, including through nets, detection systems, and shark repellent gadgets. The report is expected in September.

On the high-tech front, commissioners heard an “invisible fence” proposal from Deep Blue LLC in May that included installing a system of underwater audio devices that would broadcast sounds and noises unpleasant to the seals who attract great white sharks toward popular beaches.

Commissioners asked to see the company again later this year for an update on the progress made in creating such a system.

“There have been various solutions proposed and a lot of them have to do with dealing with the seal population and the shark population,” commissioner Chairman Ronald Bergstrom said Wednesday. “Regardless of where we go in that direction, it’s going to take a while even if some of those solutions are implemented. Right now, we are in the warning stage. That’s what we’re doing.”

The ATI speakers, which can emit both prepared alerts as well as voices from microphones, are used around the world, from military bases to college campuses, McLaughlin said. Alerts can be signaled through radios, cell phones, panic buttons, and other devices, such as smart buoys, he said.

The system would be customized for each beach so conditions like ambient noises such as waves and wind are taken into account, McLaughlin said. The cost of each project would therefore vary.

ATI is offering to try out its speaker technology at a Cape beach for a three-month pilot program, free of charge, starting as soon as this season, according to McLaughlin.

He told commissioners his daughters learned to swim at Nauset Beach in Orleans.

“This is personal,” he said. “These are my beaches too.”

The commissioners, who have limited jurisdiction over Cape beaches, advised him to bring his pitch to local selectmen and other officials.

Commissioners also heard from Peter Howell, co-founder of the Seal Action Committee, a citizen’s group, who called for amending the federal Marine Mammal Protection Act to rollback protections on seals if their population has rebounded since the act told hold in 1972.

The committee is not anti-seal, but rather, wants to ensure they are responsibly managed within the ecosystem, he said.

“In some cases (the marine mammal populations have) rebounded to, what we believe, levels with potentially significant and damaging effects on the overall ecosystem,” he added.

Sharon Young, marine issues field director for the nonprofit Humane Society of the United States, told commissioners the act already has a provision for removing protections and transferring oversight to states once populations reach sustainable levels.

But for grey seals, whose population is between 200,000 and 300,000, that could prove difficult since the population is constantly moving between the U.S. and Canada, Young said.

“The 10,000 that may be on a particular beach today are not the same ones that may be there tomorrow, and even if it’s a stable breeding population, once you remove animals from (an) optimal habitat, others will come because they can,” she said. “This is an open population.”

Bergstrom cautioned Howell that amending the act would require a long-term effort whereas officials need to immediately handle the shark situation at hand. 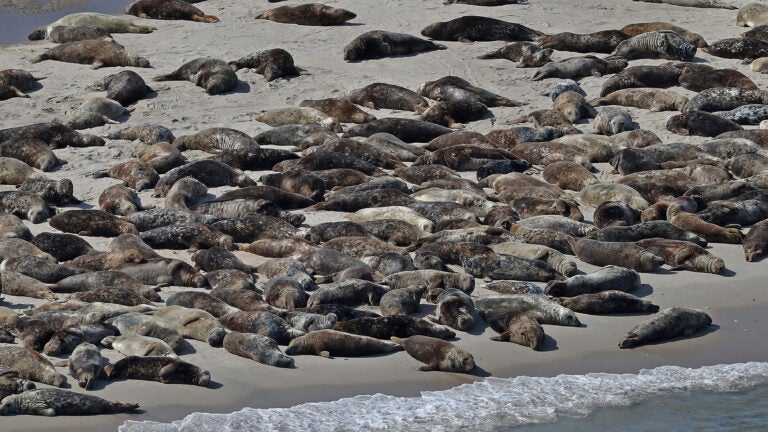 Is an ‘invisible fence’ the answer to preventing shark attacks on Cape Cod?