BOSTON (AP) — Parents who lost children to fatal overdoses and other addiction recovery activists are rallying outside a Boston courthouse Friday as a judge hears arguments in Massachusetts’ lawsuit against Purdue Pharma over its role in the national drug epidemic.

About 100 protesters gathered in front of Suffolk County Superior Court before the start of the hearing, placing poster boards filled with photos of hundreds of overdose victims on the courthouse steps. One bore the words “Always loved, never forgotten.” Another: “We march for those who can’t.” A full-size skeleton covered with empty prescription pill bottles was also set up, and many gathered on the court’s brick plaza held up their own large signs with images of their dead loved ones.

Cheryl Juaire, a mother from Marlborough, Massachusetts, whose 23-year-old son Corey Merrill died of an overdose in 2011, said activists want to continue to put a spotlight on Purdue Pharma and the wealthy Sackler family that owns it for their roles in sparking the opioid crisis with the prescription painkiller OxyContin.

“They need to see the families,” she said. “They need to be held accountable for the deaths of our children. We need restitution.”

Purdue Pharma is arguing Friday that Massachusetts Attorney General Maura Healey’s lawsuit should be dismissed because it distorts facts and statements and makes oversimplified claims in order to scapegoat the company.

In a statement as the hearing opened, it called Healey’s lawsuit a “misguided and very political effort to try to place blame on a single manufacturer” for an epidemic that’s now largely driven by illegal heroin and fentanyl.

The opioid epidemic has claimed more than 400,000 lives since 1999, but the company has argued it produced only a small fraction of the nation’s opioids — about 3% between 2006 and 2012 — while lower-priced generic drugs combined to make 90% of the pills.

“Purdue Pharma is deeply concerned about the impact the opioid addiction crisis is having on individuals and communities in Massachusetts and across the country,” the company said. “However, we strongly believe that litigation is not the answer. It wastes critical resources and time that are urgently needed now in the midst of the crisis.”

Healey, a Democrat, accuses the Stamford, Connecticut, company of falsely claiming OxyContin had low risk for addiction. Her office argues that Purdue Pharma pushed prescribers to keep patients on the drugs longer and aggressively targeted vulnerable populations, like the elderly and veterans.

The Sackler family, whose name is emblazoned across major institutions such as the Smithsonian, Guggenheim and Harvard from years of philanthropy, has also argued that Healey cherry-picked from hundreds of internal documents in an attempt to vilify them in court.

Massachusetts’ suit cites former Purdue Pharma President Richard Sackler remarks at the launch party for OxyContin in 1996, in which he said the painkiller’s launch would be “followed by a blizzard of prescriptions that will bury the competition.”

The family said in court filings Sackler was merely alluding to the fact that he was late for the event because of a blizzard.

Massachusetts’ lawsuit is among more than 2,000 by state and local governments pending against Purdue Pharma and other opioid makers. But Massachusetts’ was the first to personally name members of the Sackler family. Many others have since followed suit.

Outside the court Friday, protest organizers said they hope to continue to be a visible and vocal presence at court hearings in Massachusetts and elsewhere.

They said they want to make sure any money recovered by local governments is spent directly on substance abuse treatment and recovery support programs and not other uses.

Hampton, who is in recovery from heroin addiction, said the settlement the state of Oklahoma reached with Purdue Pharma earlier this year “sets a dangerous precedent.” About $200 million of that $270 million windfall has been designated to creating a national research center at Oklahoma State University.

“We have an opportunity to fund solutions and save lives today,” he said. “So it’s worrisome that we’ll see this firehose of money from settlements and it’ll just be misspent and all of this work to bring some justice to this will go to waste.” 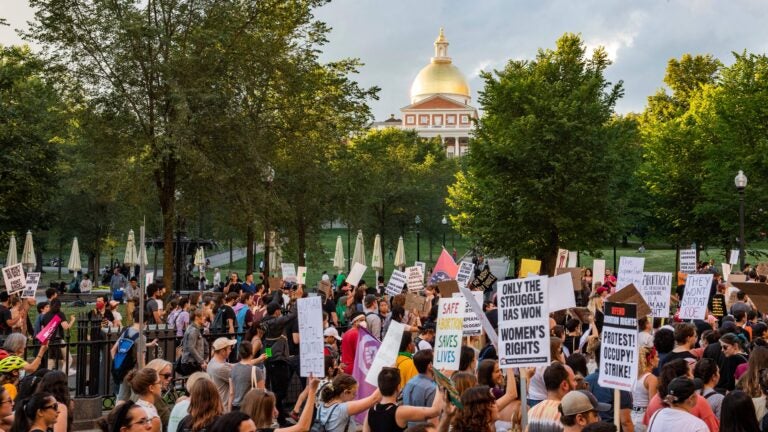