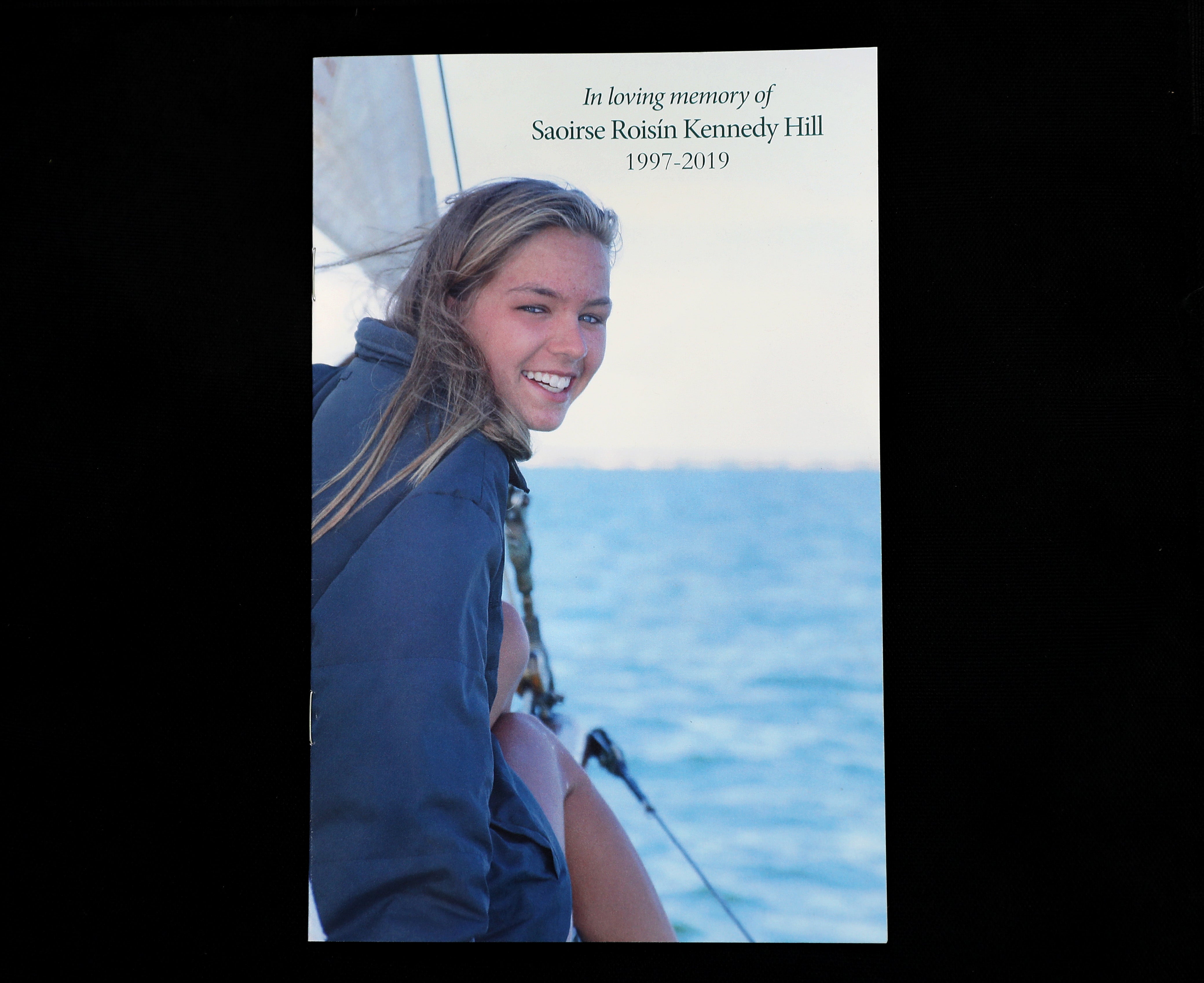 Saoirse Kennedy Hill, granddaughter of the late Robert F. Kennedy, was buried Monday after her sudden death at the Kennedy compound in Hyannis Port last week. She was 22.

Her uncle Robert F. Kennedy Jr. remembered her fondly in a eulogy he gave at her service, which he has since posted online.

In it, he spoke of her infectious laughter, big personality, and knack for friendship.

“Anyone who is tempted to feel badly that you didn’t do enough for Seersh, put that thought away,” he said. “She felt loved by everyone in this church.”

Kennedy recounted the life of a “fearlessly honest” woman who wrote about her battle with depression when she was just 18 years old:

At age 18, she published an eloquent and intensely personal description of her struggle with depression in the Deerfield School newspaper. The piece is so brutally honest that it effectively stripped her naked. What eighteen year old would choose to reveal those raw and embarrassing thoughts to her [peers], especially in one of the most competitive adolescent environments in this country?

The essay is exceptional both for its bold honesty and for its insight.

She described her depression as we would talk about a flu or a squall; something that periodically appears unexpectedly to darken her life. She characterized her agonizing discomfort at its arrival and her relief when, just as mysteriously it passed. She had the extraordinary confidence and maturity to experience depression without internalizing it. She understood that her feelings weren’t facts; they were illusions. Seersh separated herself from her illness. Feeling bad did not mean she was a bad person. The article’s most striking feature is her refusal to feel shame or embarrassment about her human condition. She celebrated and embraced every part of herself, including her struggles with depression and recovery. She refused to keep her pain secret, to isolate herself or to become morose. She never reverted to self pity.

Saoirse’s last night was a flight of her characteristic exuberance spent with her dear friend Sinead Donnelly. She finished a 25-page paper for Boston College upon which she had been laboring for a week in my garage and attic and of which she was immensely proud. She announced that she would spend the remainder of the evening in an all-night celebration of that feat. She had dinner with Grandma, watched the presidential debate, went out singing at 10:30 to a karaoke bar, and then dancing at a gender fluid pageant (a drag bar). She came home at 2 a.m. and sang and danced with Sinead in the cottage. They toured Hyannis Port in Grandma Ethel’s golf cart and swam at dawn before watching the sunrise from the beach. She went to bed looking forward to her trip to Los Angeles that day. She already had L.A. dinner dates arranged with Jack Coady and Emily Abrams. It was a perfect night and, as was her habit, she documented much of it on social media.

The two friends went to bed in Douglas’s room. Saoirse woke up with God.

Kennedy spoke of her mischievousness as a child, her penchant for making fun of herself, and her refusal to make herself the victim — even the time Kennedy’s dog bit her face, or when bees stung her lips, or the day she gave herself a serious concussion with a ski pole.

He celebrated her for what he called her ability and inclination to help the vulnerable.

“She connected to people on the deepest level,” he said. “She met our broken world and all its troubles with kindness, compassion, understanding, empathy, humor, and courage.”

Kennedy tasked his family and friends to be inspired by his niece and use her memory to make themselves better people. He asked them to model her kindness and fill their thoughts with her light.

As he closed the speech, he told the crowd it was time to stop being sad and start being grateful for the time they got to spend with Kennedy Hill.

“If anybody ever wondered whether God loves the Kennedys, the proof is that he gave us Saoirse,” he said. “Now, it’s time for us to cease being sad at her passing and to practice being grateful that we had her for 22 amazing years.”