Toxic blue-green algae blooms are making headlines nationwide as dogs across the country have fallen deathly ill after swimming in affected lakes and ponds. Some have reportedly died just minutes after leaving the water.

Here’s what Massachusetts residents should know about the algae and how it could affect their children, their pets, and themselves.

Three dogs in North Carolina died last week shortly after a play date in a pond apparently teeming with the algae, which is actually a bacteria. Four dogs have died in Texas after swimming in water containing the toxic algae. A Georgia police dog is believed to have suffered the same fate after cooling off in a pond, though autopsy results are pending.

It is not clear whether all of these dogs died from blue-green algae poisoning, but their reported symptoms were consistent with it. Many of them suffered seizures and died shortly after exiting the water.

Why does the algae harm dogs?

Blue-green algae produce cyanotoxins, which the Centers for Disease Control says are “among the most powerful natural poisons known.” The toxins have been “killing and injuring people and animals for as long as anyone can remember,” according to the American Veterinary Medical Association.

Cyanobacteria can be harmful to humans and all kinds of animals, but it is especially harmful to dogs since they’re more likely to drink water — even if it smells bad. Dogs are also likely to lick the toxic water off of their fur after going swimming. 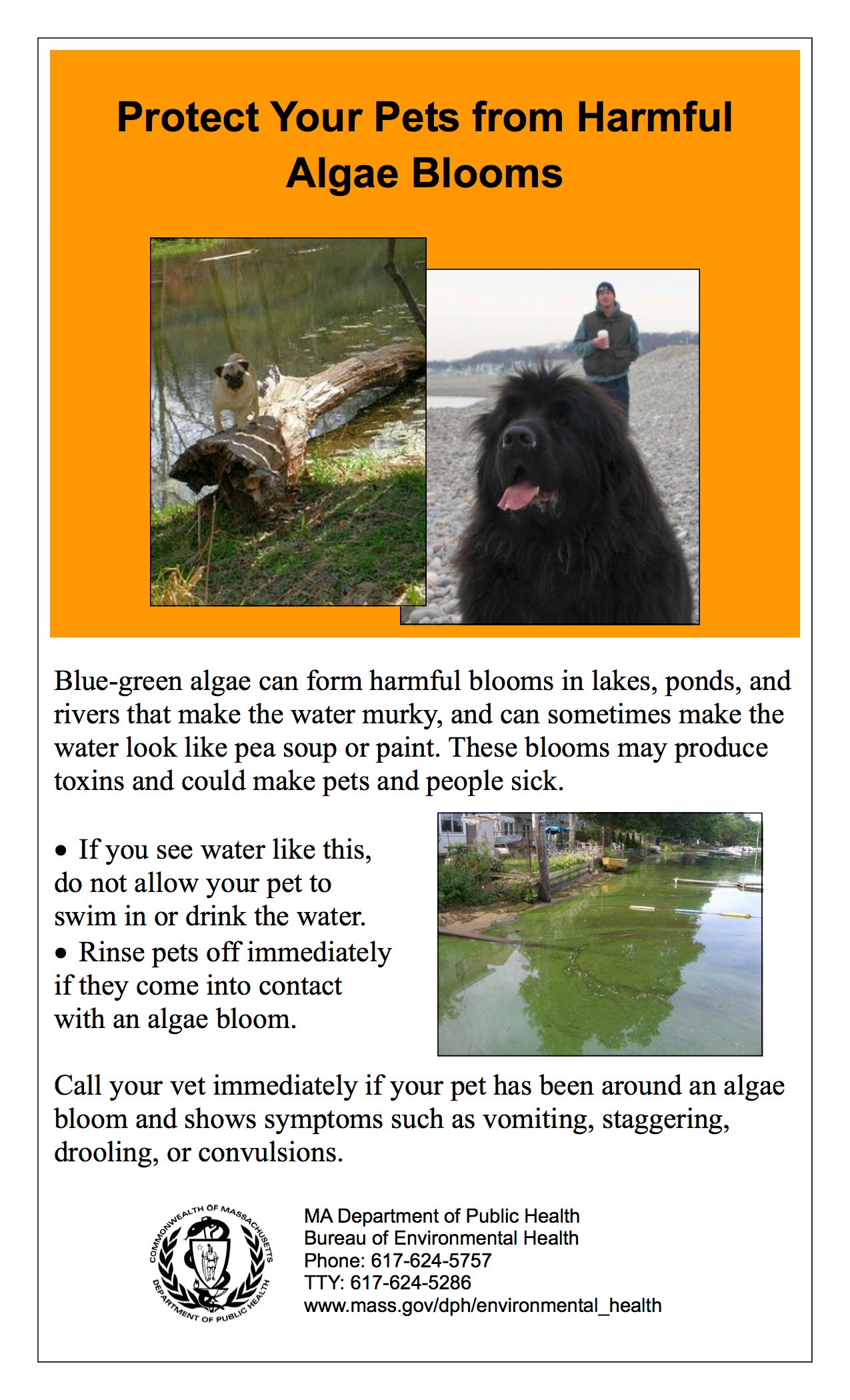 The Massachusetts Department of Public Health released this poster urging pet owners to protect their dogs from toxic algae.

What happens if your pet contacts it?

Blue-green algae poisoning can show up in many different forms, MSPCA-Angell veterinarian Kiko Bracker said. It can cause skin and eye irritation, liver damage, kidney damage, and even neurological damage. However, vomiting is the most likely symptom.

Dogs and other animals that contact affected waters should be rinsed off immediately, according to the Massachusetts Bureau of Environmental Health, and pets that show symptoms such as vomiting, staggering, drooling, or convulsions should be taken to a vet.

There’s no “antidote” for a pet that’s contacted the toxic bacteria, but Bracker said vets would generally try to “decontaminate” the animal by forcing it to vomit.

The potentially deadly algae can be a bright blue or green color that sometimes looks like paint swirling in the water. As an algal bloom dies, it might smell like rotting plants. 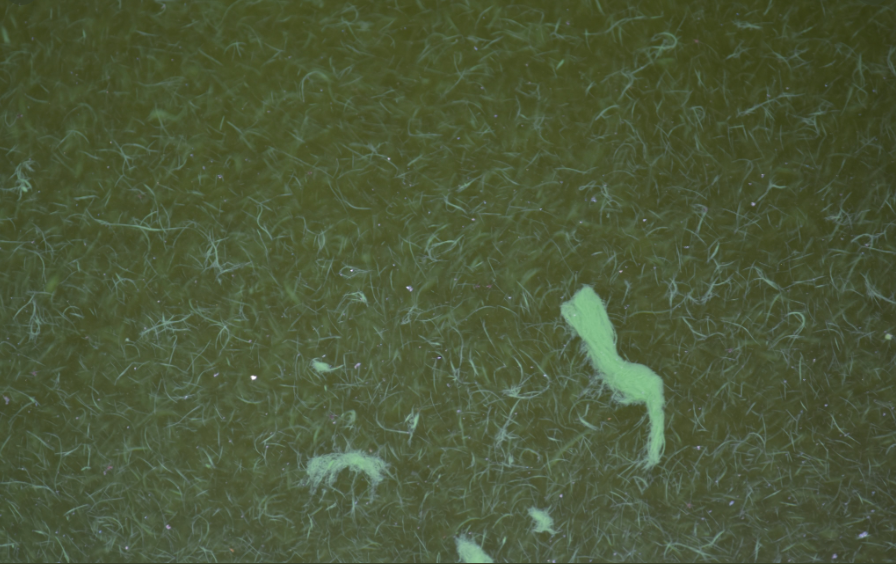 A close-up of toxic algae that appeared in the Charles River in late July.

Ahlgren is an assistant professor at Clark University in Worcester who has been studying cyanobacteria for more than two years. He said it’s important to know that the bacteria isn’t always so apparent.

“The water might look relatively clean or clear, but there still might be bacteria in there,” he said.

Alternatively, some things that look like toxic blue-green algae could be harmless. Spirulina, a popular bright green dietary supplement, is a type of cyanobacteria. It can be purchased as a capsule, pill, or powder and is commonly added into foods such as energy bars and smoothies.

What should you do if you think you see it?

“Caution is the word,” Bracker likes to say. If you’re not sure whether water is safe, don’t let your dogs play in it. And definitely don’t let them drink it.

“It’s just like mushrooms,” he said. “Our general understanding is just don’t let your animals eat mushrooms, even though some are harmless.”

The CDC also advises against swimming, water skiing, and boating in areas with discolored water or algae mats.

Should Massachusetts dog owners be concerned?

Pond closures and media coverage aside, this kind of poisoning isn’t all that widespread, Bracker said. He hasn’t seen it in his 17 years as a veterinarian for Jamaica Plain-based Angell Animal Medical Center.

“I’m sure dogs have been swimming in ponds where there’s blue-green algae and not having any issues,” he said. “There’s a lot more concern than there is actual illness.”

Although no dogs have been reported ill from the bacteria in Massachusetts this summer, multiple lakes and ponds have been shut down for days and weeks in an attempt to keep pets and residents safe.

Deborah Youngblood, the health and human services commissioner in Newton, said she decided to put warning signs up last week at Crystal Lake after some park employees spotted what they thought could be blue-green algae blooms. She formally closed the lake the next day, though the Massachusetts Department of Health is still determining whether the toxic bacteria is present.

“My job is to be thinking about public health,” she said. “I want to have an abundance of caution around anything that could have ill health effects.”

Current algae advisories in Massachusetts include:

What causes the blooms?

The recent increase in toxic algal blooms might be connected to climate change, according to the Environmental Protection Agency.

“Most of the data points to the fact that if the temperature continues to rise due to global climate change, as it’s expected to do, we will see more of these events,” Ahlgren said of the blooms.

He said the bacteria favors a warmer climate and is also linked to excess nutrients from runoff into natural waters after severe weather. This runoff can come from fertilizer, faulty septic tanks, or storm drains.

The CDC recommends limiting fertilizer use, maintaining your household septic system, and making sure water entering lakes and ponds is filtered by vegetation to prevent cyanobacteria from spreading.

Lisa Kumpf, an aquatic scientist with the Charles River Watershed Association, said the bacteria grows more readily in more urban areas like Boston where rainwater washes down storm drains and directly into the water.

However, the reasons for the spread of toxic algae are complex, and it’s difficult to pinpoint why a specific bloom happened.

“Some of these just occur naturally without potentially major impact from humans,” Ahlgren said. 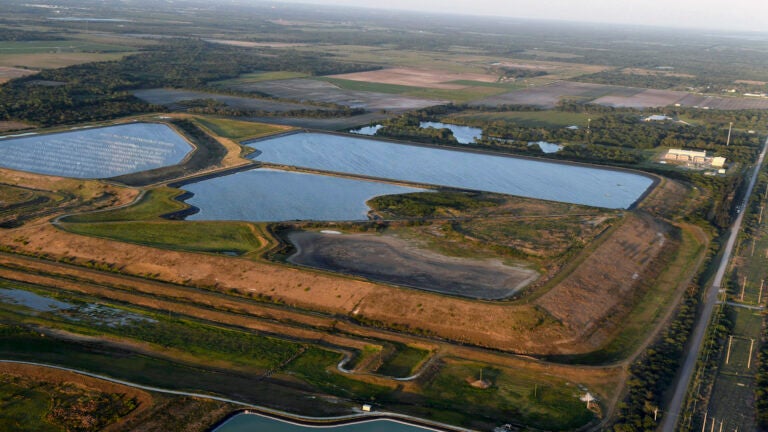