A child younger than 10 years old in Coventry and a person in their 50s from Charlestown both contracted the potentially fatal infection late last month and are now recovering after being discharged from the hospital, according to the state health and environmental management departments.

The virus was also found in a deer from Exeter this week, the departments said in a statement.

The findings bring the total number of confirmed human cases in the state this year to three after a person from West Warwick died from the infection last week.

A horse from Westerly also tested positive for the virus as well as two deer, one from Richmond and another from Coventry.

“This has been a year with significantly elevated EEE activity, and mosquitoes will remain a threat in Rhode Island until our first hard frost, which is still several weeks out,” Department of Health Deputy Director Ana Novais said in a statement. “Personal mosquito-prevention measures remain everyone’s first defense against EEE. If possible, people should limit their time outdoors at sunrise and sunset. If you are going to be out, long sleeves and pants are very important, as is bug spray.”

EEE, which spreads through infected mosquitos, carries symptoms that include fever, coma, and brain swelling. There is no vaccine for the virus.

According to Rhode Island officials, all three people diagnosed with the virus contracted EEE before critical risk areas were aerially sprayed with pesticide between Sept. 8 and 10.

The two departments are currently considering what they will do next to combat the outbreak. Future steps could include “additional aerial spraying based on information about human cases, cases in other mammals, mosquito activity, and findings in neighboring states,” they said.

“Broad and targeted notification will be done in advance of any additional aerial spraying,” the statement says.

In Massachusetts, eight human cases have been confirmed this year, including one that was fatal. 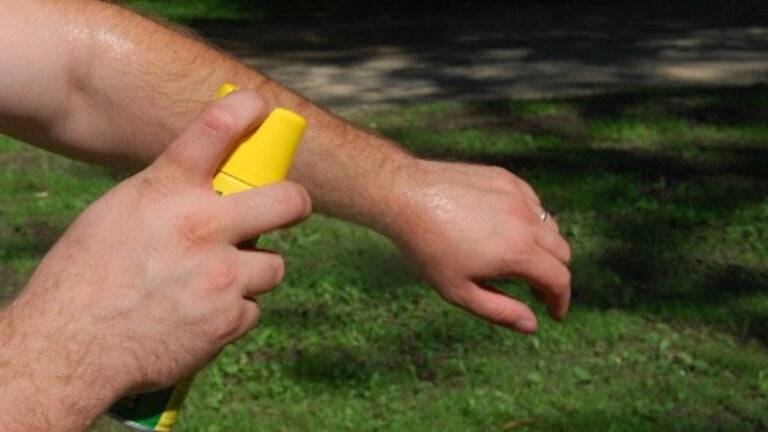 What to look for when buying bug spray