A $60 million proposal to build a thoroughbred horse racing track in Rowley has already kicked up commotion and sparked a race: A race to get inside Town Hall.

So many people showed up at a Board of Selectmen’s meeting to hear about the project from developers Monday night that officials had no choice but to table the talk and postpone.

“We never have people like that show up, even at Town Meeting,” said Eagan, who’s worked in Rowley for over 20 years.

Attendees were hoping to glean a first look at the project to transform 284 acres off of Route 133 into a one-mile dirt and 7/8-mile turf race track that could usher thoroughbred horse racing back to the Bay State.

While the proposal is in its initial stages, selectmen were slated to get an introduction to it Monday from its backers: Rowley Group LLC — a Massachusetts investment group — and the Massachusetts Thoroughbred Horsemen’s Association, or MassTHA.

At the helm of the Rowley Group is John Grossi, a thoroughbred horse owner and former owner of Latitude Sports Clubs.

In a press release, Grossi said the project would be privately funded.

The proponents say reviving the racing and breeding industry in Massachusetts could generate $500 million for the state.

The pitch they were supposed to bring to selectmen this week would have included how Rowley would stand to financially benefit from the track, among other perks like how the facility would preserve open space and create hundreds of jobs, they said.

The property’s location, not far from Interstate 95 and with easy access to New Hampshire and Maine, made the Rowley site attractive, William Lagorio, president of MassTHA, said Thursday.

The proposal envisions simulcasting races and taking bids at other tracks, which the Rowley track would receive a piece of, proponents said.

“The industry is alive and well,” Lagorio said. “It’s been portrayed in Massachusetts as dead and buried — a very bad portrayal.”

A key part of the track’s viability will be tapping the state’s Race Horse Development Fund to augment purses, the largest expense tracks typically face, according to Lagorio.

Placing bets has also become easier, with folks having the ability to make wagers on their phones from virtually anywhere, Lagorio noted.

“If you put the pieces back together for the industry … it can be an endeavor that works and is profitable,” he said.

The project is one of several looking to gallop the sport back to Massachusetts after Suffolk Downs closed over the summer. Other proposals are being offered in Great Barrington and Wareham.

According to Rowley officials, no official plans have been filed at Town Hall just yet for the latest bid. Eagan said a new date for the rescheduled meeting had not been selected as of Tuesday. 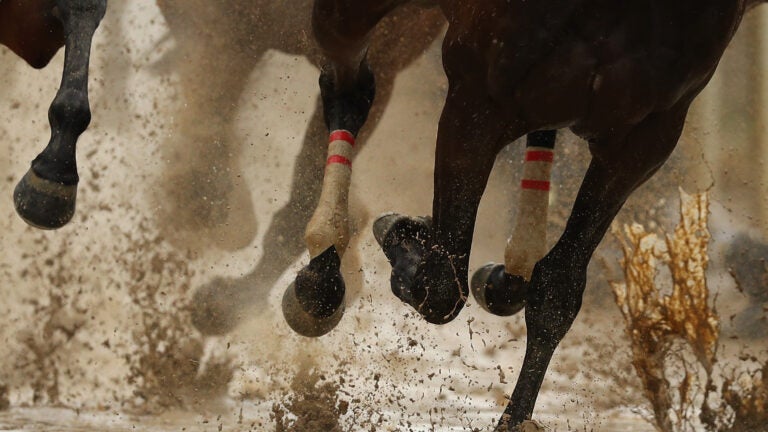