Five more cases of vaping-associated lung illnesses in Massachusetts have been reported to federal agencies and dozens more are still under investigation, state health officials say.

The Department of Public Health said the five cases, with two confirmed and three probable, were reported Monday to the Centers for Disease Control and Prevention as they continue to investigate the ongoing nationwide outbreak of pulmonary injuries.

So far, DPH has reported 10 cases to the CDC within the past month.

Five of the patients reported vaping tetrahydrocannabinol — or THC, an active chemical in marijuana — while four others reported vaping both THC and nicotine, the department said in a statement. One person, or 10 percent of the cases reported, vaped only nicotine.

“While no one has pinpointed the exact cause of this outbreak of illness, we do know that vaping and e-cigarettes are the common thread and are making people sick,” Public Health Commissioner Monica Bharel said in a statement. “The information we’re gathering about cases in Massachusetts will further our understanding of vaping-associated lung injury, as well as assist our federal partners.”

State officials are hoping to learn more about what’s potentially causing the illnesses after Gov. Charlie Baker declared a public health emergency on Sept. 24 amid the growing number of cases in states across the country.

As of Friday, the CDC said 805 lung injury cases have been reported in 46 states and one United States territory. Twelve people have died in 10 states.

Eighty-three suspected cases were reported to the DPH as of Monday, officials said.

“(Fifty-one) are still being investigated, with Massachusetts DPH officials collecting medical records and conducting patient interviews,” the department said. “Twenty-two cases did not meet the official CDC definitions. The other 10 were reported to the CDC.”

The Baker administration has also instituted a ban on all retail and online sales of nicotine, flavored, non-flavored, and marijuana vaping products slated to last through January 25, 2020.

The move outraged vape shop owners, who say it will only put them out of business while failing to tackle the heart of the problem: illicit THC vaping products.

Last week, the Vapor Zone in Danvers sued state officials in response to the ban in Suffolk County Superior Court, claiming that they failed to properly follow state law.

While the CDC has not determined a single product or chemical behind the upswell of illness, those containing THC sold on the black market are being investigated as a possible cause. Patients in most cases reviewed by the CDC reported using THC products.

In Massachusetts, most of the 10 confirmed and probable cases involve female patients, while three involve males, officials said.

Eight people have been hospitalized.

On Sunday, three Massachusetts vape businesses filed a lawsuit against the state, Baker, and Bharel in federal court in Boston.

The plaintiffs include Mass Dynamics whose manager is Behram Agha, owner of the four-store chain, Vapor Zone; Boston Vapor in Revere; and Linda and Jeffrey Vick, co-owners of Vick’s Vape Shop in Medford, according to the complaint.

The legal vape products — known as electronic nicotine delivery systems, or ENDS, by the government — sold in their stores are regulated by the Food and Drug Administration.

The plaintiffs argue that under the supremacy clause of the U.S. Constitution, the state government cannot supersede the regulations that are mandated by a federal authority.

“Taken as a whole, the ban represents an impermissible effort by Massachusetts to establish its own ENDS and e-liquids regulatory and enforcement policy,” the lawsuit says.

The businesses also say the ban impairs them from fulfilling contractual obligations with their wholesalers and landlords and significantly burdens interstate commerce, which makes the measure unconstitutional, according to the complaint.

Baker, continuing to defend his decision Monday, told reporters his administration is prepared to face the lawsuit, The State House News Service reports.

He said the sales ban is needed in order to better study the health risks associated with vaping.

“People aren’t really quite sure about why, and until we have a better answer on why, we felt the best thing to do is to put in a four-month ban,” Baker said. “Obviously people have the ability to go to court if they wish to, and we’ll continue to make our case associated with the public health issue on this.” 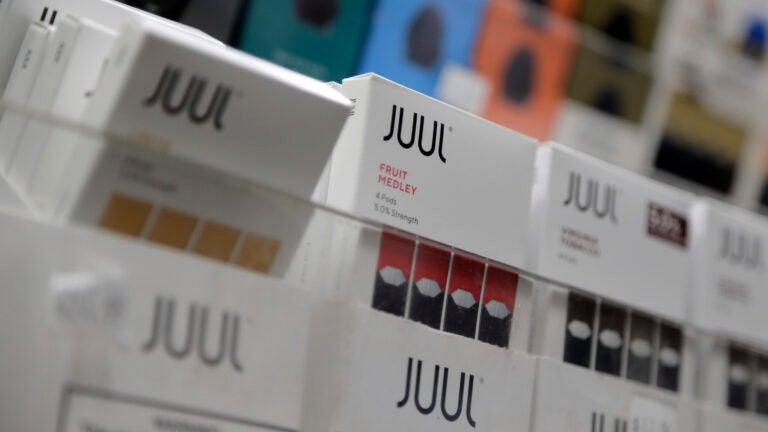