When sculptors and crafters began creating the two memorials that now sit near the Boston Marathon finish line, the process, from start to finish, would take five years.

“We took our time, and when we were ready, we were ready,” artist Pablo Eduardo says in a short documentary about the project released Sunday.

The video, commissioned by the City of Boston, traces the craft, meaning, and story behind the bronze and granite installations on Boylston Street, unveiled over the summer to honor the victims of the 2013 Boston Marathon bombings.

The three granite sculptures are dedicated to those killed in the April 15, 2013, explosions: Martin Richard, 8; Lingzi Lu, 23; and Krystle Campbell, 29.

Two bronze bricks honor MIT police officer Sean Collier, 26, who was killed by the bombers Tamerlan and Dzhokhar Tsarnaev in the days following the marathon, and Boston police Sgt. Dennis Simmonds, 28, who died in 2014 after sustaining a head injury in the Watertown shootout with the two brothers.

In the documentary, those involved in the project say they worked with the victims’ families to find a meaningful way to remember the reality of the horrific event while honoring the memory of those who lost their lives.

“What was comfortable for one family had to be comfortable for all the families,” Austin Cowles, assistant project manager at McCourt Construction Company, says in the film. “They had a voice in every single aspect of the project. That’s part of the reason why it took so long to finish, because we wanted it to be done the right way, for the families to be happy with it, all of them.” 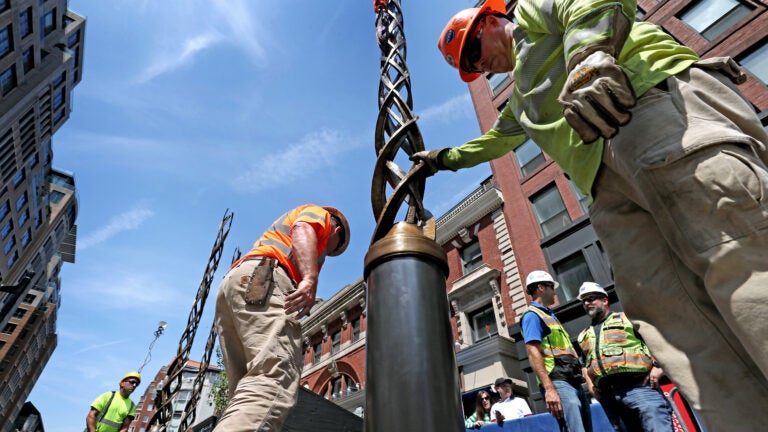 The Boston Marathon bombing memorial is coming together on Boylston Street