As the cost of Boston housing continues to soar, the candidates for four at-large City Council seats say the city must shake up how its approaching the issue of affordability.

The eight contenders who took the stage for a debate at WBUR’s City Space theater Tuesday laid out visions of re-instituting rent control, overhauling the city’s Planning and Development Agency, and increasing the number of affordable units developers are mandated to build.

The rise of rents and housing prices amid Boston’s building boom is a problem residents know too well, candidates said.

“My wife and I spent 14 years in East Boston, a community that we grew to love and that we’re still very connected to,” David Halbert said. “Now we’re living in Dorchester and we’re happy to be there, but what sent us to Dorchester was the fact that we couldn’t find a home for a growing family in our neighborhood and if we couldn’t, we know that’s facing so many others.”

Both Halbert and Julia Mejia called for changes to the city’s Inclusionary Development Policy, regulations that map out the number of income-restricted units developers must build in qualifying development projects.

Developers are required to set aside 13 percent of the units as affordable in a proposed market-rate project if the project has 10 or more units and is seeking zoning relief.

Activists have decried the figure as far too low to tame the city’s housing crisis.

Halbert said he would support raising the threshold to a minimum of 20 percent.

Mejia has said she would like to see the number as high as 50 percent.

“The needs of Boston require that we are, that we act bolder,” she said Tuesday. “If we ask for 50 percent we might get 30, but if we’re only asking for 20, we’re lucky if we get 15 or 18. So I think that we have an opportunity to negotiate, and I think that if we’re not building for the City of Boston, we have to ask ourselves who are we building for?”

Alejandra St. Guillen said the city must also look beyond tweaking policy and take on new initiatives. Area median income, or AMI, one of the metrics used to determine what’s considered affordable, is set by the federal government, she noted.

Althea Garrison, who gained her seat on the council in January, offered that Boston must bring back rent control — shot down by statewide voters in 1994 — to put a damper on rising costs and address homelessness.

She filed a home rule petition to re-instate the practice that received a mixed reception by the council in April. On Tuesday, she took aim at her fellow incumbents, who she said don’t want to support the effort because of their ties to the development industry.

Several councilors own property they rent out.

“A lot of people probably don’t like it, but we have to do something about rent control,” Garrison said in her opening statement. “There are people that are being made homeless every day in this City of Boston.”

Asked about her proposal to disband the Boston Planning and Development Agency, incumbent Michelle Wu said the city has created a patchwork system of zoning variances on a project-by-project basis, and needs to better focus on planning that will meet housing needs in each neighborhood.

“For Boston to say that we’re going to aim for 53,000 new units or 69,000 new units of housing without doing the planning to specify where those units can go so the city can grow sustainably, equitably, that we can continue to have affordability, manage our climate change vulnerability, it leads to what we see today,” Wu said.

Michael Flaherty reiterated a longstanding position that the city’s Planning Department be a standalone agency, but the incumbent added that the expertise of the BPDA has given the city “invaluable tools that are helping us as we move our city forward.”

Earlier this month, Councilor Lydia Edwards filed a proposal to usher in changes for the Zoning Board of Appeal, a group recently plagued in scandal and the target of a federal probe.

The plan would scrap the existing board structure by removing the real estate industry from the table, and instead bring in affordable housing, urban planning, and other experts — changes needed to protect the ZBA against conflicts of interest, she said.

Erin Murphy, a renter herself, said the board must be more transparent. Neighborhoods often feel that their voices are not heard in the appeal process, she said.

“We have too many conflicts of interest, but I don’t think we should just throw it all away,” she said. “I think we should look closely, maybe have a City Council member sit on there because we would have to answer back to people.”

Annissa Essaibi-George, an incumbent who voiced initial support for Edwards’s proposal, said that while there is definitely room for other voices on the ZBA, the group still needs professionals “who have knowledge about the industry, who understand what a good project is.”

“It’s important to have, but it should not be done at the exclusion of our other community members,” she added.

The four top vote-getters in the Nov. 5 general election will secure seats on the council. 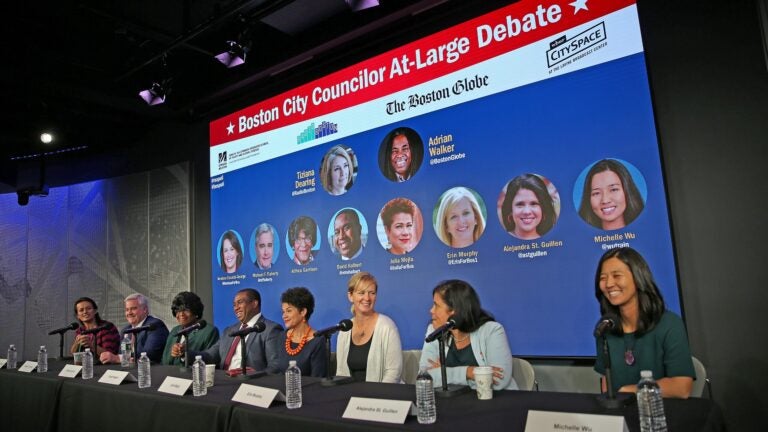