With a planetarium, 4-D theater, butterfly garden, and Van de Graaff generator that slings lightning bolts, the Museum of Science often ranks among the best of its kind in the country. But these days, the accolades don’t come without a share of turmoil.

While the museum forges ahead with major renovations, pouring millions of dollars into projects that will broaden and modernize its offerings, it has recently come under fire for allegedly pressuring its employees to upsell visitors or see their hours cut. News of the hard-sell tactics came during a tumultuous year at the Boston institution. In January, longtime president Ioannis Miaoulis stepped down and, 11 months later, has yet to be replaced. This summer, the organization’s interim leader cut 29 positions.

All modern museums must assert their relevance and appeal to a populace that can explore the world with a couple of taps on a smartphone. Science museums face the particular challenge of highlighting fields of study not only defined by discovery but preoccupied with it, fixated on what’s next rather than on the past. But in Boston, the Museum of Science bears the distinctive burden of high expectations: a 189-year-old institution striving to stay current while the thriving tech and educational giants just blocks away make news every day.

The challenges often revolve around money. In May, Wayne Bouchard, the museum’s interim president and director and chief operating officer, wrote to employees with a three-step plan to shrink labor expenditures “as rising costs continue to outpace revenues.’’ Admissions were up and membership revenue steady, but Todd Sperry, who oversees marketing and communications at the museum, blamed financial strains on the rising costs of operating an aging, quarter-mile-long building located atop a dam on the Charles River.

To balance the budget, the museum offered early retirement packages to eligible employees, but also hinted at layoffs if not enough employees opted out voluntarily. By July, 21 of the museum’s roughly 400 employees had taken retirement and eight had been laid off.

The cuts occurred as the museum rolled out a long-anticipated 10-year master plan to transform the 100,000-square-foot Blue Wing, a three-story atrium opened in 1971 and home to over 20 exhibits, including the 4-D theater, butterfly garden, and Theater of Electricity.

The wing will welcome two new permanent exhibits in 2020: one, an immersive look into polar environments; the other, an expanded engineering design workshop. Beyond the Blue Wing, the Mugar Omni Theater will be completely renovated next year with funding from museum patron David Mugar.

Launching new exhibits — and maintaining older ones — doesn’t come cheap. At $29 for an adult and $24 for a child, the Museum of Science charges steeper admissions fees than nearly all science centers throughout the country. By comparison, the New York Hall of Science in Queens charges $16 per adult and $13 per child, while the Museum of Science and Industry in Chicago charges $22 and $13, respectively.

The only major museum that outprices Boston is the California Academy of Sciences in San Francisco, which charges a whopping $36 per adult and $28 per child. But that price includes admission to all exhibits, a massive aquarium, and a glass-domed rain forest.

At the Museum of Science, visitors — and even members — must pay extra to view blockbuster touring exhibits, like the controversial “Body Worlds,’’ a current expo of dissected real human bodies, or “Harry Potter: The Exhibition,’’ a popular 2010 showcase of costumes, props, and sets from the film franchise.

“Museums have turned to corporate entertainment models for a better sense of how to monetize their exhibits. If you want to view the shows, go to the planetarium, see the butterflies, you have to pay up for each,’’ said Alison Griffiths, a professor at Baruch College in New York who has studied the evolution and role of museums.

Science museums from Denver to Philadelphia have adopted this a la carte model. But Museum of Science workers told the Globe earlier this month they feel pressured into “taking as much money as possible from visitors’’ by signing up new members, selling tickets to temporary exhibits, and setting up automatic membership renewals.

On a recent Friday, a family of three spent a half-hour outside the museum box office contemplating their options. Ultimately, the father agreed to wait in the lobby while his teenage daughters explored the permanent exhibits on their own and paid extra to see the “Body Worlds’’ exhibit. The family finally reconvened for the “Great Barrier Reef’’ IMAX show. Total cost for the girls’ admissions and three movie tickets? $96.

Temporary exhibits do more than generate extra revenue. They also give museumgoers something flashy and new without requiring the museum to renovate permanent exhibits.

“It is a big challenge to have dozens of galleries, and it is very hard to make them all change fast enough to keep up with modern science and museum practices,’’ said John Durant, an MIT professor who specializes in the public perceptions of the life sciences and biotechnology.

“In most very large museums, you can usually find some part that hasn’t changed in a while because that’s the nature of the beast.’’

At the Museum of Science, renovations over the past three years produced the interactive Yawkey Gallery, a series of water-centric exhibits exploring nature and engineering on the Charles River, and the Hall of Human Life, which offers up personalized (albeit eerie) analysis, such as the efficiency of a person’s gait or the shape of the arch of her foot. But some of the museum’s natural history offerings languish. The computers in the dinosaurs exhibit recall the anxiety of Y2K, while the New England habitats hall is about as dynamic as the taxidermied animals in its dioramas. The museum admitted in a 2017 newsletter that the Blue Wing was in need of “rejuvenation.’’

Science museums face pressure to remain relevant in content as well as design. As Durant puts it: “You don’t have to persuade anybody that a Picasso is valuable and worth looking at.’’ But that may not be true for a rudimentary light bulb or chunk of limestone from the Rock of Gibraltar.

“There have been just as many years of science as there have been art, but it’s part of the ethos of science to look forward and into the unknown. So that culture doesn’t necessarily help museums,’’ said Durant, who is overseeing the MIT Museum’s move to Kendall Square.

For all the pressures, the Museum of Science continues to generate impressive numbers. Attendance peaked in 2015 when 1.51 million visitors walked the museum’s sprawling halls and ventured into a newly debuted Pixar exhibit. While numbers dipped by more than 100,000 in 2016 and 2017, they rebounded to 1.46 million visitors in 2018. Such totals are on par with the Museum of Science and Industry in Chicago, the California Science Center in Los Angeles, and the California Academy of Sciences in San Francisco, and dwarf those of all other major science museums around the country.

The majority comes from donations. In 2016, the museum received $50 million — the largest donation in its history — from billionaire and Medford native Michael Bloomberg. Nash said $41 million went into the museum’s endowment to ensure future financial security. The remaining portion funds curriculum development and food science initiatives, such as the Hunger to Health summit, a regional collaboration aimed at addressing food insecurity, in mid-November. A year after Bloomberg’s gift, MathWorks, a Natick-based software developer, donated $10 million to the museum to assist in the Blue Wing renovation.

In an interview on Tuesday, Bouchard, the interim president and chief operating officer, described feeling “really excited about the future’’ and said the museum “has done all the right things to position the institution for continued success.’’

Bouchard does not expect the museum board to name a permanent president until early 2020. (Miaoulis received $626,000 in total compensation according to the museum’s 2016 tax return, the most recent available publicly.) Months after cutting 29 positions, the museum listed 24 job openings Friday. Meanwhile, the hard-sell box office tactics are pushing current staffers to look elsewhere for employment, according to Globe reports. All the while, the city and science race forward, and the museum struggles to keep pace. 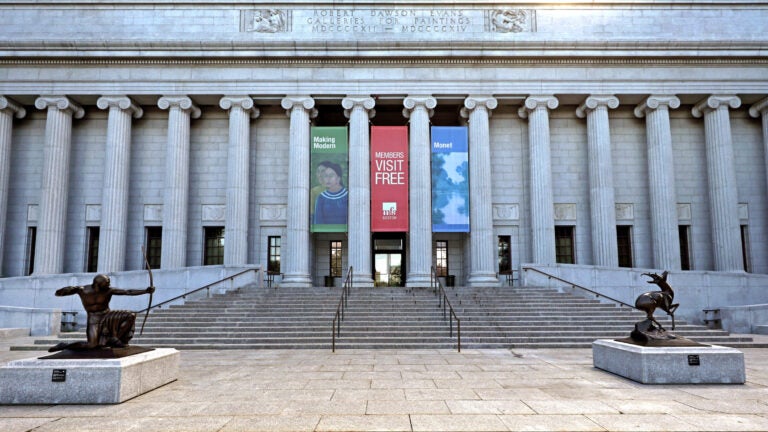 Employees at the Museum of Fine Arts vote to unionize