MBTA commuter rail riders will soon no longer be able to unobstructedly walk — or run — onto their train at Boston’s three busiest stations.

Beginning early next year, Keolis Commuter Services will start installing subway-style fare gates outside of the commuter rail platforms at North Station, South Station, and Back Bay Station, according to a Boston Globe report Sunday. The commuter rail operator says the move comes after years of missed revenue and complaints from some riders; currently, the only steps taken to reduce fare evasion are through in-person ticket checks.

“People will have to slightly adjust their behavior,” Keolis spokesman Justin Thompson told the Globe. “It certainly is a change, and we’re confident passengers will adapt. We hear from passengers all the time that fare collection is important to them.”

How will it work?

The new fare gates will be able to process paper single-trip tickets, commuter rail passes held on CharlieCards, and the MBTA app, as well as Amtrak tickets, according to the Globe.

And while the details have yet to be completely finalized, Thompson confirmed the plans in an email Monday. As the Globe reported, the company plans to first install gates at North Station sometime during the first half of 2020, before adding them in Back Bay and South Station later in the year.  According to Thompson, there are no plans for gates at any stations other than those three hubs, which handle a vast majority of all commuter rail trips.

The Globe reported that the designs for North Station are “all but finalized” and would place fare gates around the main lobby area where people wait around the train departure board.

The MBTA released a preliminary sketch of their plans in April, showing three different rows of gates and a glass barrier closing off the area. The updated plans call for more gates instead of the glass barrier. Access to the Jack’s Abby Track Zero Taproom will be outside the gates, so the public will still be able to access the bar. 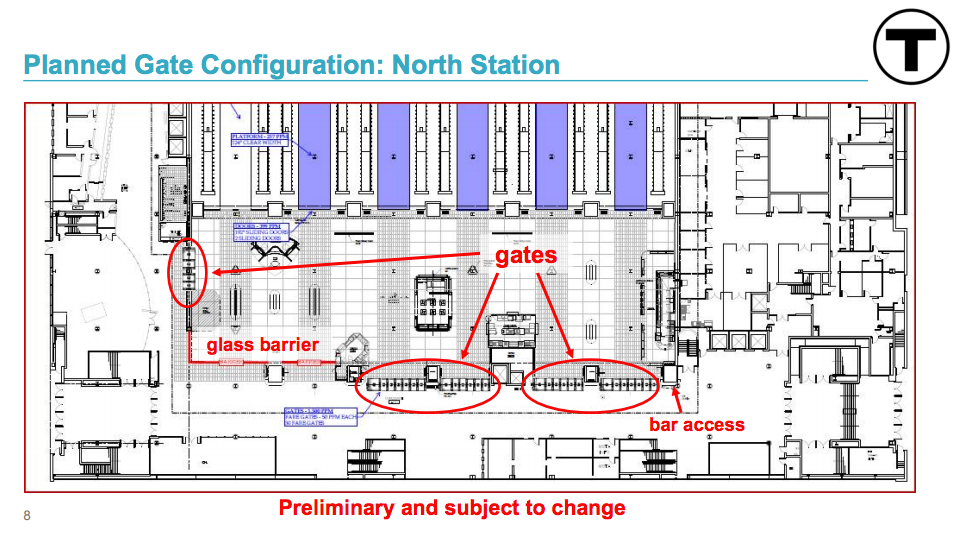 Thompson says that Keolis is planning a campaign in the months leading up to the launch to help passengers become more familiar with the gates. 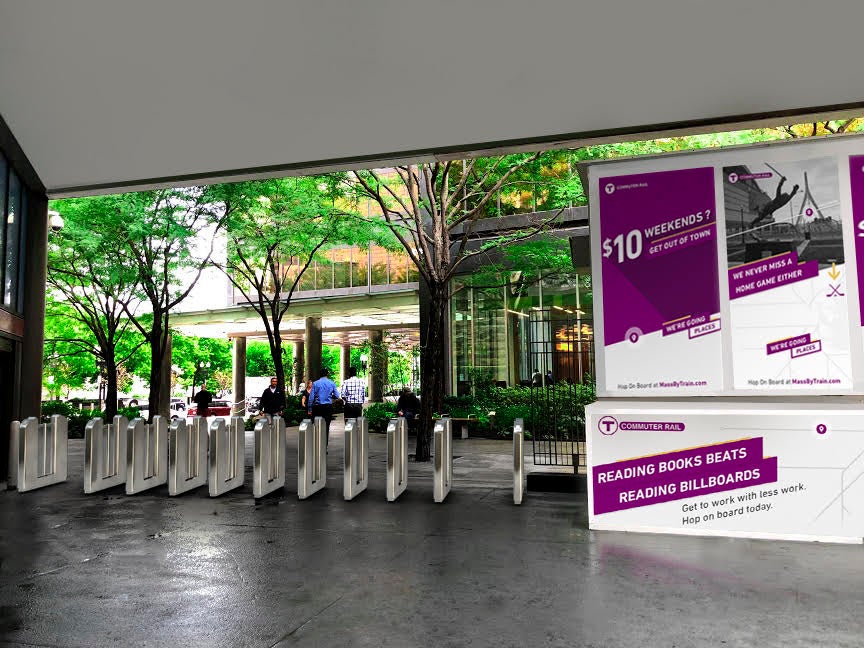 A rendering of a South Station commuter rail fare gate.

Why are they doing this now?

Still, at a time when the rest of the MBTA has seen ridership declines, the commuter rail has seen steady growth in recent years, despite its higher prices. And the new gates will help recoup at least some of the estimated $10 million to $20 million that the MBTA loses each year due to “ticketless travel” on the commuter rail.

That’s less than it used to be. In 2016, Keolis reported that the MBTA was losing $30 million a year in revenue. At the time, the French company estimated that 15 to 20 percent of commuter rail riders were either paying the incorrect fare or simply ducking ticket checks. Since then, they’ve worked to reduce, if not eliminate, fare evasion.

“When coach cars are full, it can be challenging for conductors to get through an entire train,” Thompson said.

In 2017, Keolis hired more than 30 employees to check riders’ tickets before they boarded trains at Back Bay, North, and South stations. The company has also deployed new digital scanners to boost enforcement.

Those efforts have helped cut down the amount of lost fares. But at roughly 4 percent to 8 percent of total potential revenue, the commuter rail’s “leakage” rate remains above the 3 percent industry standard of “the most airtight, gated systems,” according to an MBTA presentation this past April.

Keolis and the MBTA have intended to install commuter rail fare gates at the three stations since at least 2017. However, they decided to press pause on those plans in the fall of 2018 as the MBTA looked at a new automated fare collection system that would phase out the CharlieCard and allow riders to board subways and buses with the tap of a card or smartphone.

But after officials announced last week that the new all-electronic payment system would now be delayed until 2024, they decided to move forward with the commuter rail gates in the short term. 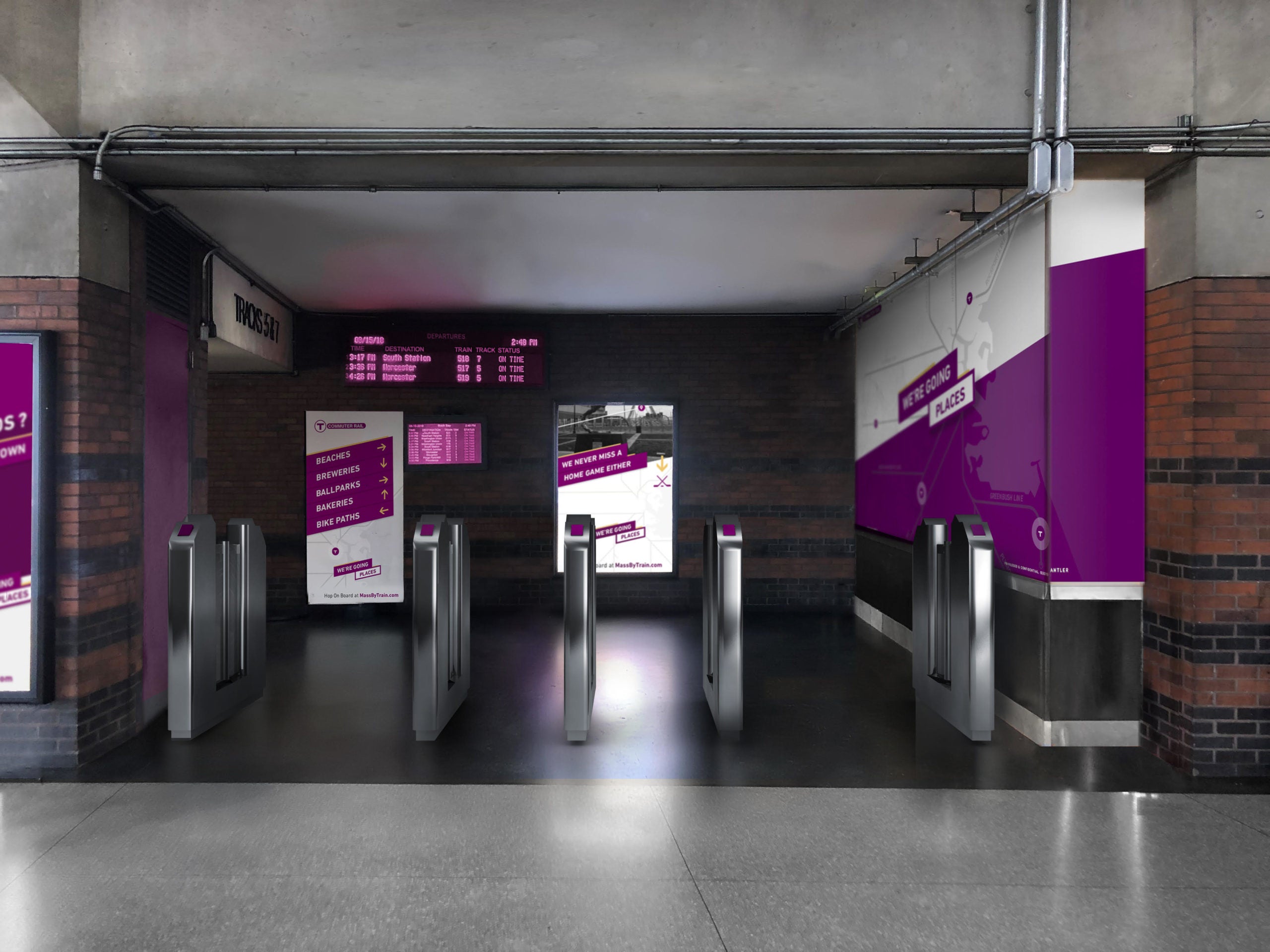 A rendering of a Back Bay Station commuter rail fare gate.

According to the Globe, the MBTA hasn’t yet finalized a contract with Keolis, but a previous estimate pegged the cost of the new gates at $10 million. With around 90 percent of commuter rail trips either beginning or ending at Back Bay, North Station, or South Station, MBTA officials have said they expect the gates to “significantly reduce” fare evasion.

They do still expect to lose some revenue, especially since the gates would only effect outbound trips from the three Boston stations. The Globe reported that Keolis does anticipate requiring inbound passengers to “tap-out” as they exit the stations — but not until the MBTA has completed the systemwide fare collection upgrades. And there will still be on-board conductors double-checking tickets.

Thompson says that fare evasion on the commuter rail has been a “top complaint” from legislators, elected officials, and regular passengers, who often purchase a monthly pass, as opposed to paying (or not) for a single trip. Even if fare gates pose an additional inconvenience for those rushing to catch a train, Keolis says they’re working to minimize any disruption.

“We are performing pedestrian flow modeling and working with MBTA and other officials to determine the exact locations that will be best suited for safety, ease of movement and other important details,” Thompson said.