Women’s Health Services, which has provided abortion and family planning services in Greater Boston for nearly three decades, has turned to a GoFundMe campaign to help keep its doors open.

It’s a Hail Mary move for the Brookline clinic, which will close within a few months if it doesn’t secure enough support from donors, according to the campaign. The campaign is still a good distance from its $250,000 goal, but has had an uptick in contributions after recent media attention. As of about noon Monday, the fundraiser had reached about $126,000 since it began on Dec. 2.

While a GoFundMe may seem like an unusual step for a for-profit clinic, Dr. Laurent Delli-Bovi, the clinic’s medical director and founder, said the clinic hasn’t been profitable since 2006, and in the past has relied on a variety of sources to stay afloat, like teaching or research participation.

The biggest piece was grant money. A private organization that supports abortion gives out grants, both to for-profit institutions  and nonprofits. Women’s Health Services applied for a grant that would help with its debt relief. The application was turned down.

“We realized that we had significant debts, which were in excess of $300,000, and without the debt relief, we just weren’t sustainable,” Delli-Bovi told Boston.com in a recent interview. “That was actually one of the reasons that was given us for why we weren’t chosen … that they didn’t think that we were financially sustainable, which from my point of view is 100 percent correct. But we are certainly worth sustaining because of the population of people we take care of, which is a very special population of people who sort of fall through the cracks.”

With help from the GoFundMe, the campaign said the clinic staff “will continue to do everything in our power to find a more sustainable solution to secure our future.”

The crux of WHS’s financial woes has to do with low reimbursement rates, and making care more affordable for people paying out of pocket. WHS is the only provider in the state, outside of hospitals, that provides services up to the state’s abortion limit, which is up to 24 weeks. About 70 percent of WHS’s clientele are either uninsured, underinsured, or have MassHealth, according to Delli-Bovi.

WHS operates with set costs for services. A first trimester abortion between four and 11 weeks is $700, while 12 to 13 weeks is $750. About 90 percent of patients have a first-trimester procedure, Delli-Bovi said. Second trimester procedures are more costly due to the more complicated nature of them; the cost is $1,000 to $3,300. While that may seem like a lot, it’s a fraction of the cost of going to a hospital, according to Delli-Bovi.

As for MassHealth, about 30 percent of WHS patients are on it. But for a first-trimester procedure, WHS gets reimbursed $375 of the $700 cost, according to figures provided on the GoFundMe site. The goal of the clinic, which has been open since 1992, has “always” been to provide care to people who may fall into one of these categories, she said.

“We want to take care of women that are in this smaller group of people who are paying out of pocket, especially since, you know, you don’t have to be poverty level or on MassHealth for $6,000 to be a hardship to come up with,” Delli-Bovi said. “We’ve always wanted to take care of that group of people and keep our prices low for them other than the hospital option.”

And it’s not just women in Massachusetts who go to WHS. Women travel from other parts of New England, and, as abortion laws have become more restrictive throughout the country, from places like Texas or Louisiana. There’s also been some international patients, women from South America, the Caribbean, and Europe.

Since the GoFundMe has gained traction, Delli-Bovi said the generosity from donors has been “heartwarming.” Some of the donations have been accompanied by a comment.

“I still recall climbing up the rickety wooden fire escape stairs in [a] seedy Chicago neighborhood holding the hand of my best friend from college who wanted an abortion before abortions were legal,” wrote one donor who contributed $100. “We were terrified.”

The generosity has appeared to buoy morale.

“That’s what keeps you going, is knowing that you’re doing something that’s good, that’s worth fighting for and trying to preserve,” Delli-Bovi said. 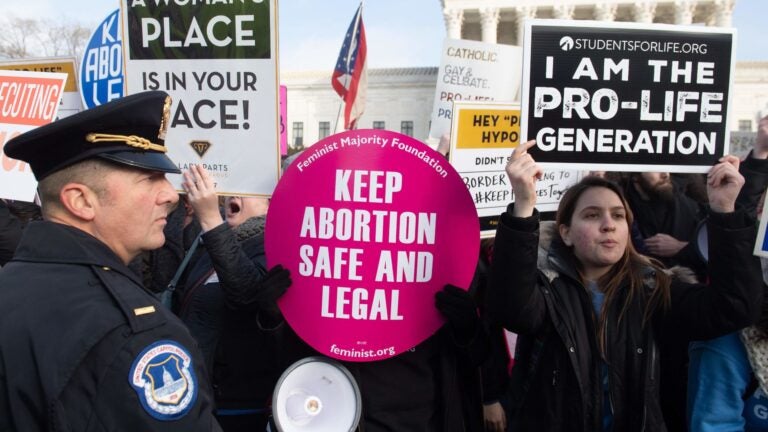