PLYMOUTH, Mass. (AP) — The iconic Plymouth Rock and other sites were covered in red graffiti Monday during a vandalism spree discovered at the site marking the landing of the Pilgrims in Massachusetts 400 years ago.

Officials in Plymouth discovered the vandalism early in the morning. Workers had removed the red spray paint, which included the letters MOF and the numbers 508, from the rock before noon.

Authorities say no arrests have been made and the site was open to tourists.

The rock has come to symbolize the spot where William Bradford and the Mayflower Pilgrims disembarked before founding Plymouth Colony in December 1620.

Police said the vandals also targeted a seashell-shaped sign celebrating the upcoming 400th anniversary of the 1620 Mayflower landing, the Pilgrim Maiden statue and the National Monument To The Forefathers.

It was not immediately clear if this graffiti incident had any connection to the anniversary celebration, but Plymouth Rock has been the site of political demonstrations before.

United American Indians of New England holds the solemn remembrance on every Thanksgiving Day since 1970 there to recall what organizers describe as “the genocide of millions of native people, the theft of native lands and the relentless assault on native culture.” 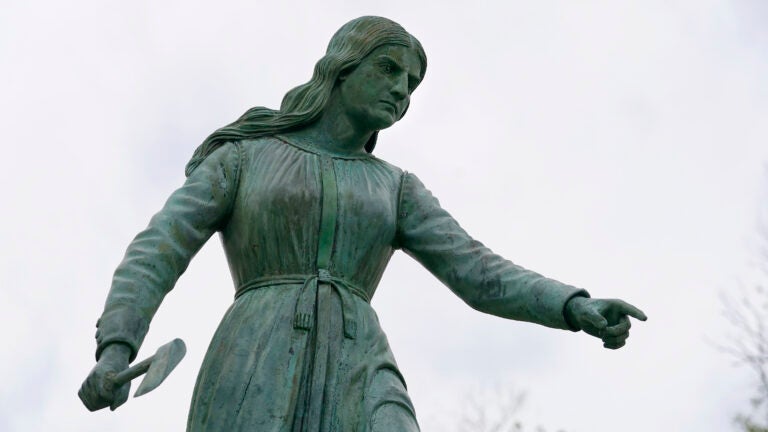