Dr. Keith Ablow had his Newburyport office raided Thursday by the Drug Enforcement Administration, the latest development in a downward spiral for the celebrity psychiatrist.

Last May, Ablow had his medical license suspended by the Massachusetts Board of Medicine, which labeled Ablow “an immediate and serious threat to public health” at the time. Ablow, 58, was also accused of having sexual relationships with three female patients, who sued him. Their cases resolved in June 2019, according to The Boston Globe.

Little is known about this latest development – a DEA spokesman did not respond to an inquiry from Boston.com. However, Special Agent Timothy Desmond, a spokesman for DEA, told the Globe that raiding Ablow’s office was part of an “ongoing investigation,” but declined to give further detail on what that is, or what authorities took.

Here’s a look at Ablow’s career, and everything we know leading up to the raid:

Ablow’s website says he was a psychiatrist for 25 years prior to “developing his own groundbreaking life coaching, mentoring and spiritual counseling system.”

Ablow, who graduated from Brown University and Johns Hopkins School of Medicine, has also authored 15 books, and has had his work printed in national publications, like The New York Times and the Washington Post, the website says. He’s also spoken on various TV programs and stations, including Good Morning America and Fox News – he was a contributor there until 2017, according to the Globe.

Ablow is based at 36 Water St. in Newburyport, according to the site.

He’s given controversial opinions before, including about transgender people and on Michelle Obama’s weight.

In 2014, Ablow reportedly criticized allowing children to make decisions about their gender, according to the Huffington Post.

“I don’t see anything but toxicity from the notion of a person with female anatomy feeling free to use the urinal in the boys’ rest room while a boy stands next to her and uses one, too,” he reportedly said.

“How well could she be eating? She needs to drop a few,” he reportedly said.

Two of the three lawsuits brought by Ablow’s former patients were filed in February 2019; one was filed in 2018, according to the Globe. All three were settled outside of court, the Globe reported, and the conditions were not released. Ablow denied what the lawsuits alleged in a tweet last February that appears to have since been deleted.

In each of the lawsuits, the three women said they moved from other states to be closer to Ablow in Newburyport, according to the Globe. He would give them Ketamine to treat depression, according to the suits.

One of the women, originally from Ohio, said that before she moved to Newburyport, she and Ablow would communicate multiple times a day, the newspaper said.

“I asked Dr. Ablow why he had such a terrifyingly strong effect on me and he told me it was nothing to be afraid of,” the woman said in the lawsuit, as reported by the Globe. “It was then that my sexual encounters with Dr. Ablow began.”

Another, from New York, said in her lawsuit that Ablow would become physically violent when he saw her.

“He would have me on my knees and begin to beat me with his hands on my breasts, occasionally saying, ‘I own you,’ or ‘You are my slave,’” the Globe reported.

Ablow lost his medical license on May 15, 2019, following a meeting of the Massachusetts Board of Registration in Medicine.

“The Board alleges that Dr. Ablow engaged in sexual activity and boundary violations with multiple patients, diverted controlled substances from patients, engaged in disruptive behavior, including displaying and pointing a firearm on multiple occasions in a manner that scared an employee, and procured his license renewal fraudulently,” the board said in a news release at the time.

Meanwhile, Ablow was reportedly counseling patients in Newburyport, according to Commonwealth Magazine, which reported that this is allowed.

“Life coaches, spiritual counselors and other practitioners routinely help people overcome problems with mood, anxiety and self-esteem,” Ablow told the magazine in an email. “I feel fortunate that people around the United States and in other nations continue to seek me out to provide such help, along with help clarifying and reaching their personal and professional goals.”

A malpractice attorney argued to the publication that there should be laws preventing this.

“I think legislation to address this issue that allows these people to continue to practice is absolutely necessary,” Andrew Meyer told Commonwealth Magazine.  “Somebody like this is a potentially serious danger to society and this needs to be remedied.”

Ablow wasn’t arrested during Thursday’s raid, according to the Globe. He also hasn’t been charged.

Federal authorities also allegedly raided the Daniel Lynch Pharmacy on High Street, according to the Daily News of Newburyport.

For a period of about six hours, starting around 7 a.m., authorities could be seen taking office items and paperwork out of Ablow’s office. Photos from the scene show authorities loading cardboard boxes into the back of vehicles.

In the past, Ablow has allegedly prescribed some of the drugs that fall under DEA regulation, the Globe said. The state noted that from 2010 through 2015, Ablow allegedly handed out 37 prescriptions to a woman who started working for him as an intern before becoming his officer manager and executive assistant; 27 of those prescriptions were for Adderall. He also allegedly told her to hold on to some of the pills so he could have them.

The state also alleges that Adderall and Clonazepam were prescribed to another woman who worked for him, the Globe reported. 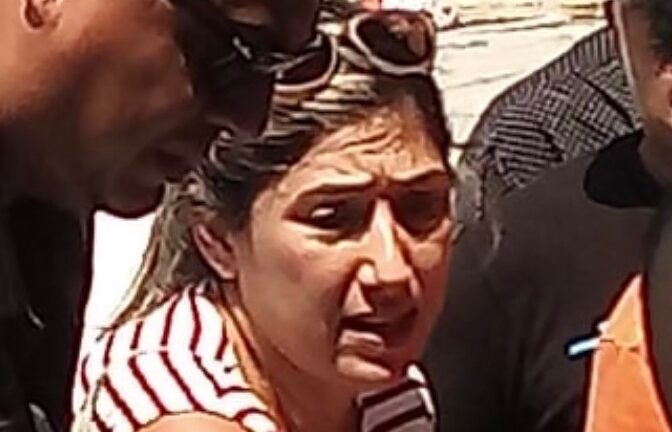 What we know about 'Perla,' alleged recruiter in migrant case