The new Orange Line trains are out of service. Again.

The MBTA announced in a 5 a.m. Tuesday morning tweet that the new cars had been pulled from the tracks because “inspectors identified a fault with the bolsters which is being corrected to ensure the vehicles are reliable & safe for the duration of their service lives.”

The new trains are expected to return “later this week,” the T said, and, in a response to a concerned rider, said that service would not be impacted Tuesday morning.

Bolsters, for anyone who isn’t familiar with train lingo, “are the part of the train that allow the wheels & their frames to rotate & maneuver turns in the tracks,” the T noted in a more explanatory tweet mid-day Tuesday.

Lisa Battiston, a spokesperson for the T, said in an email to Boston.com that officials are investigating to determine the cause of the issue, and said that the repairs don’t cost the T anything since the trains are under warranty.

As to the the variety of issues that have caused the trains to be taken out of service several times since their debut, Battiston noted that, “when integrating new equipment into a system, it is typical that the equipment rotates in and out of service for adjustment. If necessary, trains may be kept out of service for testing and in order to address any possible issues.

“The MBTA continues to closely monitor the new trains, which are subject to numerous, routine inspections,” she said. “By subjecting new trains to this high level of scrutiny, the MBTA can proactively identify any potential issues and take any corrective actions early.”

She also said that the MBTA expects that “these vehicles will have a life of at least 30 years.”

Since the new cars began taking passengers last August, they have experienced several different issues. One of the new trains derailed at the Wellington yard last November after it was taken out of service following a morning of carrying passengers. Damage to the new train wasn’t “significant,” T officials said at the time.

Then the trains were taken out of service for seven weeks, beginning in mid-November, due to an “unusual noise” that MBTA engineers discovered was a “wear pad” that was “wearing irregularly.” The trains were back on track in early January.

In early February, a car on one of the new trains experienced a “door issue” that forced passengers to get off at Wellington.

Following the Tuesday announcement, Twitter users reacted with their usual dismay and criticism.

“Can we expect the new Red Line cars will have all the same issues that the new Orange Line cars have had?” questioned a Twitter user identified as “Marla, just Marla.”

“I assume that ‘later this week’ is MBTA-speak for 2025…?” Twitter user John Cabral said. 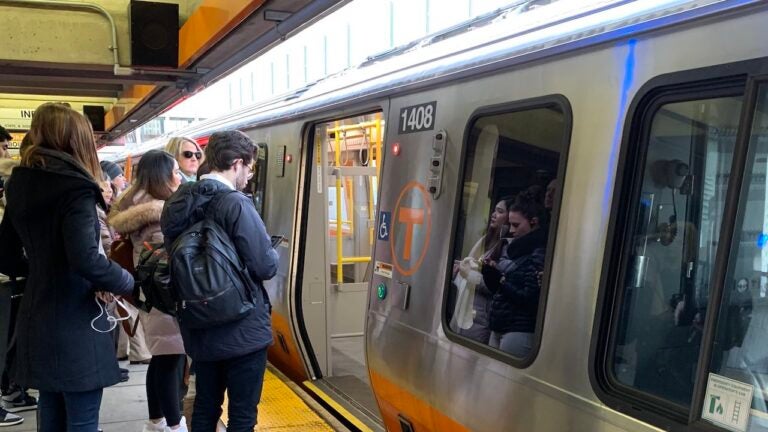