The major landmark comes more than 15 months after recreational marijuana sales began in Massachusetts — and nearly 40 months since the state voted to legalize the drug. And while Pure Oasis’s leaders are admittedly nervous for the long-awaited opening Monday, they’re working with city officials — and customers —to limit the craziness.

“We will do our very best to be good neighbors and good business owners and great community partners,” Kobie Evans, who owns Pure Oasis with his business partner Kevin Hart, said Friday.

Here’s what customers and curious visitors should know before paying a visit:

When will they be open?

Pure Oasis plans to open at 11 a.m. on Monday and will have regular operating hours of 11 a.m. to 7 p.m., seven days a week (with the exception of all Suffolk County and Massachusetts state holidays).

Where exactly is the store?

There are plans to open stores that are located in central Boston. But this one isn’t.

Pure Oasis is located at 430 Blue Hill Ave. on the corner on Stanwood Street — about four miles south of downtown Boston in the Grove Hall neighborhood of Dorchester. The store is also about a half-mile up the road from Franklin Park.

Pure Oasis is strongly recommending customers take public transportation, which can be done in a number of different ways.

While the shop isn’t located near any MBTA subway stations, several bus routes converge in the area; the 45, 14, 19, 23, and 28 lines all have stops within a few blocks. Subway riders can take the Orange Line to Ruggles and then — depending on the time — ride the 45, 19, 23, or 28 bus lines to the neighborhood. Red Line riders can get off at the Fields Corner station (on the Ashmont branch) and take the 19 bus from there to the shop.

Pure Oasis is also just a half-mile walk from the Four Corners/Geneva commuter rail station on the Fairmount Line. There’s also a BlueBikes station outside the Grove Hall Library, which is a five-minute walk from the dispensary. 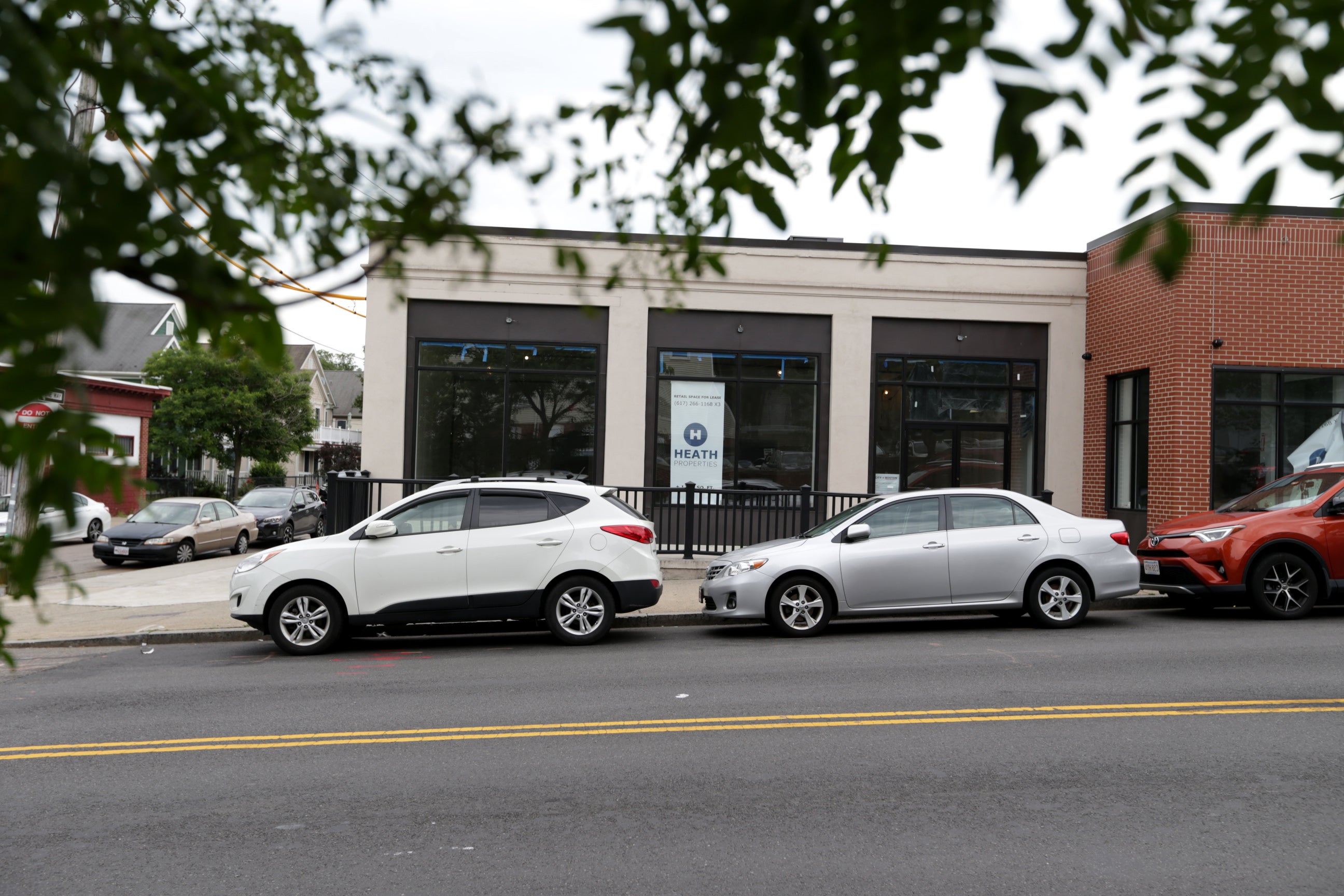 Walsh said Friday that the city has also cleared four parking spaces in front of the store to serve as a ride-sharing pick-up and drop-off zone for those who’d rather take an Uber or Lyft.

If there’s no other option than driving, the shop is surrounded by free street parking (though there may be at least initial restrictions on Stanwood Street). Pure Oasis, however, is asking those driving to the store to use the municipal parking lot off Georgia Street behind the Flame restaurant, a block south on Blue Hill Avenue.

Pure Oasis has said they expect crowds of up to 1,000 people per day.

That doesn’t match the 2,500 daily customers that have swarmed NETA’s shop in Brookline, which has been the closest place for Boston residents to buy recreational marijuana for the last year. But it’s still expected to initially result in, as Walsh put it, “lines and chaos.”

“What we’re going to do is the best job we can possible to make sure that we limit that,” the mayor said, asking customers to be respectful of the neighborhood, its residents, and the business.

Pure Oasis is renting space next door that fits up to 100 people as an ad hoc waiting room to minimize the extent that lines will impede sidewalk traffic. They’re also planning to offer online ordering, though it won’t be immediately available.

Evans said Friday that the vast majority of concerns they’ve fielded from the neighborhood relate to parking, crowds, and “fear of the unknown.”

“We have yet to run into many people that have an abject opposition to what we’re doing,” he said.

Evans noted that public consumption of marijuana still remains illegal. Customers also have to show valid identification, like a driver’s license or passport, showing that they’re at least 21 years old to even enter the store.

Walsh said they’ll be monitoring the store’s effect on the neighborhood “hour-by-hour” to see if they need to adjust any traffic or crowd plans.

What can I buy?

Pure Oasis’s menu currently lists eight different varieties of indica, sativa, and hybrid marijuana flower — all of which are priced at roughly $60 for an eighth of an ounce (plus a 20 percent tax). Pre-rolled joints go for up to $20 a pop. And concentrates go for up to $80 a gram.

The shop also has a variety of cannabis-infused chocolates and gummies, as well as vape pens and other accessories. While state law caps individual transactions at 1 ounce of flower or the equivalent of 5 grams of concentrate, Pure Oasis — like most high-traffic dispensaries in the state — will at least initially have additional limits on single purchases. According to a spokesman, customers will be limited to up to an eighth of an ounce of flower, three pre-rolls, and three vape pens, per purchase. However, there will no additional limits on edibles and concentrates.

According to the store’s website, they accept cash, debit, and credit cards.

What took so long?

Yes, it’s been a bit of a wait since the 2016 ballot measure for the first recreational marijuana dispensary to open within Boston’s city limit — though Walsh would challenge that premise.

“I don’t think it took long,” he said Friday. “This industry is brand new.”

And the city has had other considerations than just how quickly they could get stores open. In addition to being Boston’s first adult-use dispensary, Pure Oasis also has the distinction of being the first shop in Massachusetts to come through the state’s economic empowerment program that looks to boost communities of color, which were disproportionately harmed by the war on drugs.

Walsh noted that Massachusetts was the first state in the country to include a focus on ensuring equity and diversity in the industry into its marijuana legalization law.

“There wasn’t a lot of boilerplate language around the country that we could look at to see what they did,” he said. “I would rather be consistent and steady and have a very good outcome, than rush and start approving facilities all over the city of Boston.”

Walsh noted that Boston was the “first city in America to formally prioritize diverse applicants.” Following criticism of the pace and transparency of the city’s previous licensing process, the mayor signed an ordinance in November that also established a Cannabis Board to vote on applications. The city has signed host community agreements with a dozen other planned marijuana establishments, and officials expect at least three more to open in the near future.

A Dorchester resident himself, Walsh said it was “no secret” that he opposed the 2016 legalization ballot measure, but commended how “professional” the industry’s rollout has been.

While frustrations have persisted about the pace of the rollout and the extent to which the commitment to equity has been fulfilled so far, state officials have defended their deliberate approach. Cannabis Control Commission Chair Steve Hoffman said Friday that he remains “optimistic” about creating a diverse legal marijuana industry; Pure Oasis’s opening Monday is a step in that direction.

“We’re nowhere near where we need to be,” Hoffman said. “But it’s progress.” 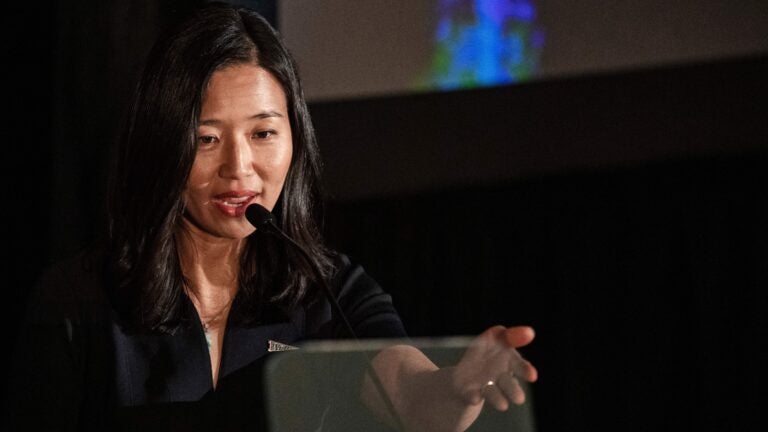