A Cambodian refugee met his 1-year-old son, holding him for the first time, in Terminal A at Boston’s Logan Airport late last month.

Thy Chea, a Lowell resident since 1991 who said he was wrongly detained, then deported in August 2018, returned home on Feb. 26 after an 18-month legal fight against the Department of Homeland Security (DHS).

Chea said he was unexpectedly detained after getting a call from Boston’s Immigration and Customs Enforcement office.

“They wanted me to come down,” Chea said, “to sign some papers.”

But when he’d checked in with ICE officers the month before, as per an order of supervision stemming from two, older criminal offenses, they hadn’t mentioned this.

So he went to the ICE offices with his wife and daughter.

“They detained me right there,” Chea said.

He said he could hear his daughter, 18 months at the time, crying “Daddy, Daddy,” in the background as ICE officials took him away.

They didn’t even have him sign papers, he said. Officers told him there was a Cambodian councillor who would interview him soon. In that first moment after being detained, he said, his mind was racing with hard-to-explain emotions.

“It felt like something stuck in your throat,” Chea said. “It’s devastating.”

He said he missed his daughter, and his wife, a U.S. native, who was carrying their son.

Bethany Li, Chea’s lawyer from the Greater Boston Legal Services, said she had been able to get a stay granted for him the day he was deported in August 2018.

But the order came just 16 minutes too late. Chea’s plane had already taken off.

Chea said when he first arrived in Cambodia, he was set up with housing through a readjustment program that helped deportees transition into new lives. There, he followed a schedule everyone adhered to — at 7 a.m., you were allowed to go out, but you had to be back by 9 that night.

“When I first got there I didn’t have a phone,” Chea said.

But as soon as he accessed one, he talked to his family over video chat for half an hour to an hour nearly every day. Since Cambodia is 12 hours ahead of Boston, the second Chea would wake up at 7 a.m., he’d phone his wife to be sure he caught everyone at 7 p.m. their time, before they went to bed.

Come the weekends, though, Chea said they’d talk almost all night long. On Fridays he’d stay on the phone with his wife until their kids fell asleep.

“But Sunday night, around 10 o’clock, she’d hang up the phone because she had to go to work the next day,” he said.

Li said Chea’s family felt an impact after he was deported, too.

“His family struggled,” she said. “His wife suddenly became a single parent with a newborn on the way. And I think that’s difficult for anyone, even with the most resources available to them.”

She said they were the main reason Chea kept his hopes so high despite being in a country he’d escaped at 10 years old.

When Chea first came to the U.S. as a kid, Li said, he was fleeing the Khmer Rouge regime. She said the war displaced his family and the genocide left lasting trauma — Chea had been recently diagnosed with depression and PTSD stemming from his childhood.

“The history of trauma and displacement over and over and over again from the original countries they came from to refugee camps,” Li said, “to the areas they live in now, and to then be displaced again back to countries where they and their parents were fleeing for their lives, in order to save their lives — it’s a devastating cycle.”

To be sent back there and get by, she said, took a lot of sustained work and communication with his loved ones.

Li said at the time he was deported, he had two criminal charges on his record: an assault and battery, and a six-month sentence for a threat to commit crime, neither of which are deportable offenses.

“At a certain point, the immigration judge and the government attorney agreed with us in immigration court that the offenses Thy had been deported for are not deportable offenses,” Li said.

Having cleared that up, she filed a motion to reopen Chea’s case and get his green card back.

By June 3, 2019, the Defense Intelligence Agency agreed to reopening his case, but when Chea went to the U.S. Consulate in Cambodia to try to sign the documents he needed to come home, they said they weren’t authorized to give them to him.

Eventually, Li said she filed a mandamus action — which forces the government to make sure it fulfills its duty of making a decision on an immigration case — hoping to compel DHS into issuing the travel documents Chea was entitled to as a green card holder. Through this, he was finally able to come home. Supporters of Chea hold signs and chant before he’s entered the terminal on Feb. 26.

Li said Chea was deported as part of a series of other detentions of Cambodian Americans.

Li said Lowell has the second largest Cambodian American population, and there have been a growing number of what she calls illegal and unconstitutional ICE raids.

“Even when ICE is engaged and aware of that, they fight as hard as they can to keep people out of the country,” she said. “Knowing that and knowing how difficult that fight is can be discouraging.”

But she believes seeing Chea come home means there’s hope in the possibility of bringing others home.

“We’re so incredibly excited and we really want to savor this victory that Thy was able to come back to his family and to his home and to his community, but we also want to make sure that everyone knows that we have to keep fighting,” Li said. “We’re going to keep fighting.” 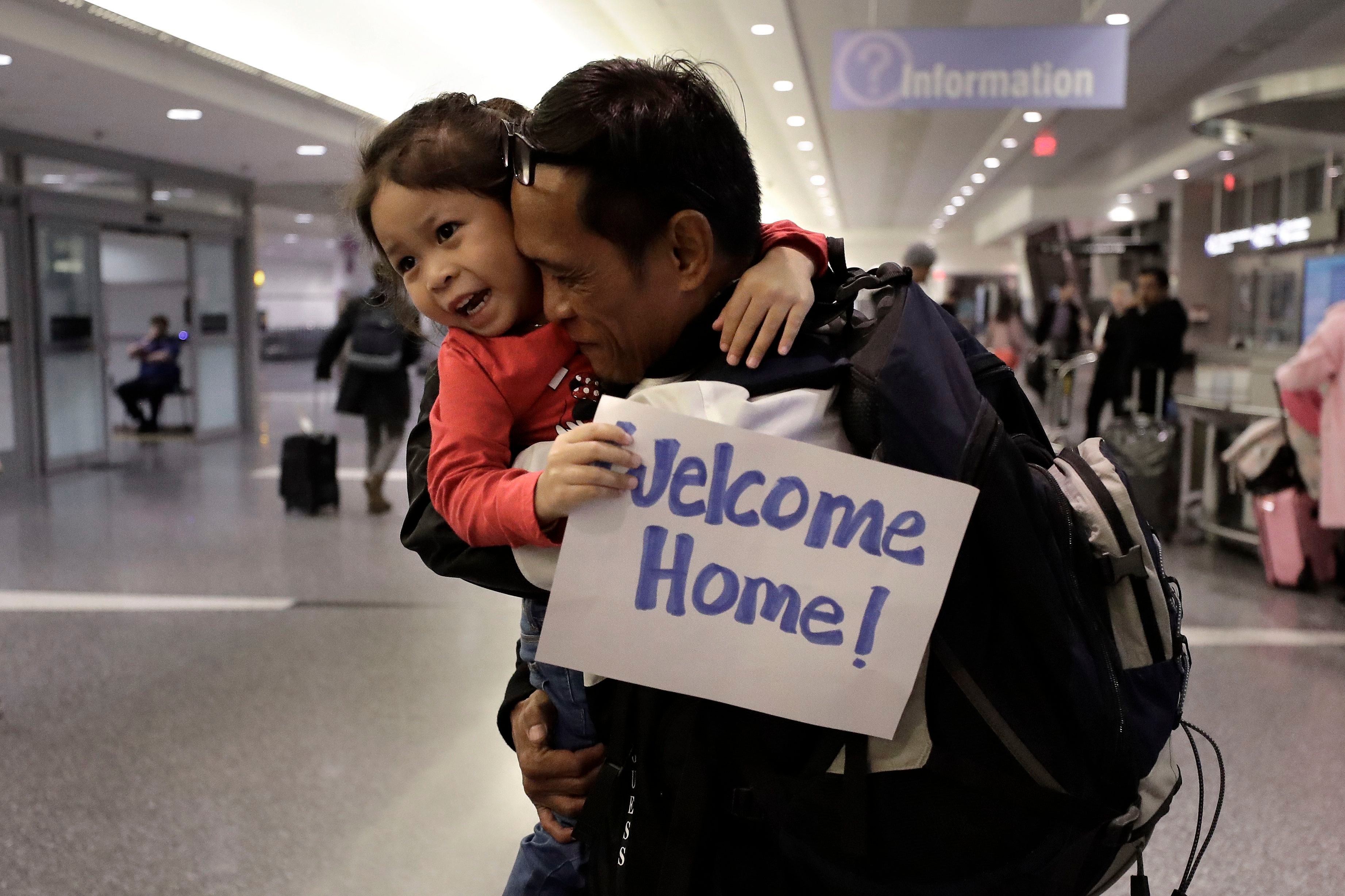 Chea hugs his daughter after arriving at the Logan Airport on Feb. 26.

She said watching Chea’s kids running toward him in the airport was an unimaginable feeling.

Chea said not being with his wife when she gave birth to his son, and missing that milestone, was an awful feeling. Now that he’s back home, he’s not letting a moment pass him by.

“I just want to be the best father I can be for my children,” he said. “I’m just looking forward.”