But within three weeks, after the number of coronavirus cases in Italy surged and the country implemented measure after measure to contain its spread, the UMass Lowell sophomore was back in Massachusetts.

“I just spent three weeks in stress,” she told Boston.com in a recent interview.

Arora isn’t alone. Most local colleges have suspended international study programs in recent weeks, a move that has been urged and supported by Gov. Charlie Baker and public health officials as a means to help slow the spread of the COVID-19.

Arora said she never foresaw being impacted in such a way by the virus outbreak. She wore a mask as a precaution when flying, but when she arrived in Milan on Feb. 13, there were only a handful of reported cases in Italy so she wasn’t concerned about being in the country.

During the first few days, she saw everything she could in the city as orientation before her study abroad program began.

“There were city tours and stuff that we went to and everything was pretty normal at first,” she said. “But then when the schools got shut down, then things started getting bad.”

Everyone was wearing masks around Milan and the stress in the city was palpable, she said.

“People would be very aware of each other,” she said. “Everyone would be looking at each other a certain way and it just kind of felt like … everyone was always on defense.”

Classes for her program were initially delayed for a week. The 20-year-old had only been in the city for about two weeks, but she said she and a friend decided they could use the delay as an opportunity to travel to Florence.

Arora said her parents, seeing news about the growing outbreak in Milan and northern Italy, urged her to leave the city until classes started up.

“When we got to the train station to go to Florence, all the trains were canceled and all the trains were shut down,” she recalled. “And then our parents really panicked, and we sort of panicked … That’s when it really hit us that this was something serious and that we do need to get out of Milan and actually take all of our stuff.” 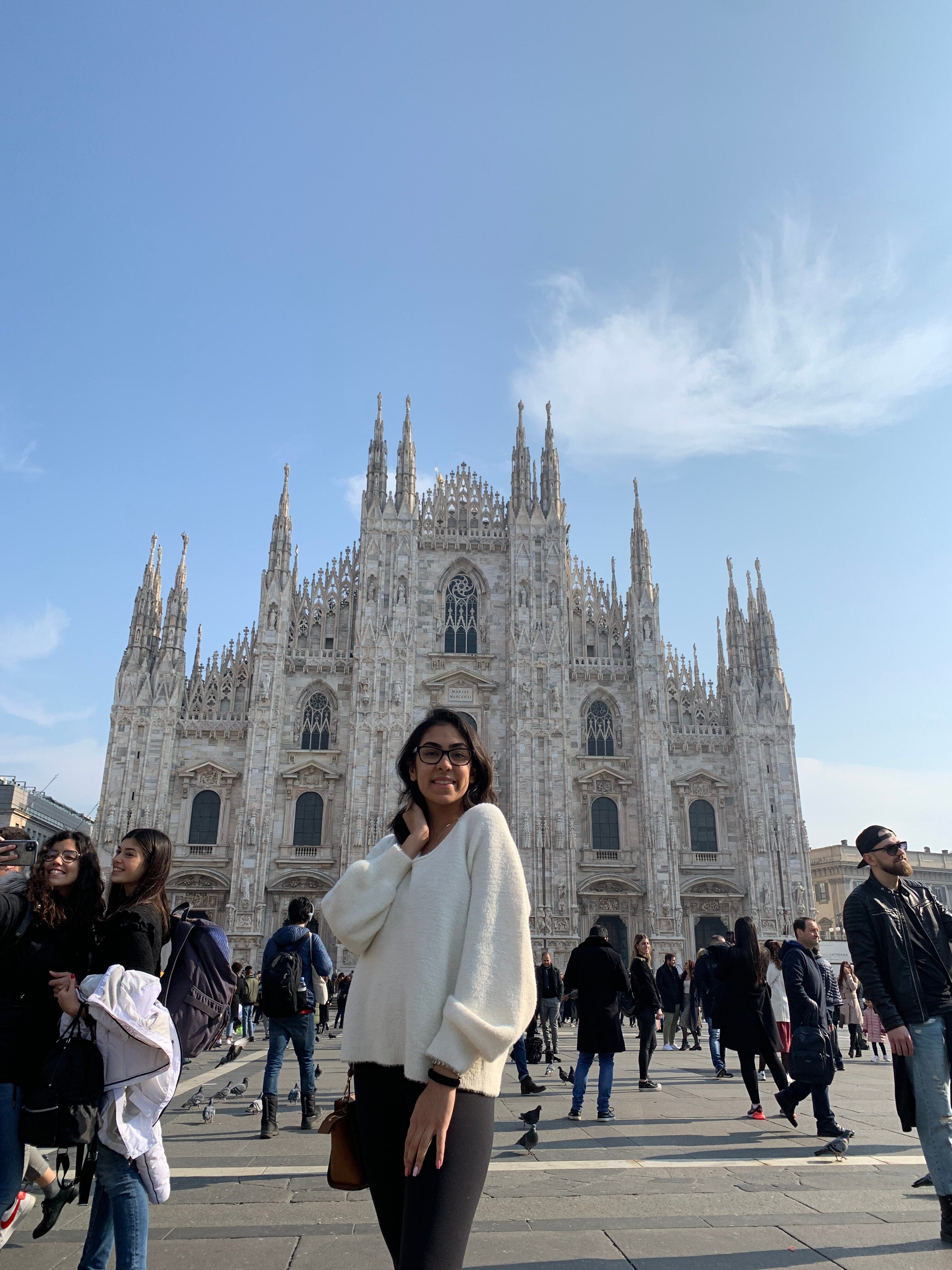 Serena Arora visited the crowded Duomo in Milan when she first arrived in mid-February.

Arora and her friend flew to Rome on the 25th, hoping that they’d be able to return to Milan soon and school would start up as normal.

In the meantime, staying in a hotel, they tried to see as much of Rome as possible, since much of the city was still operating as normal.

“We just felt like nomads at that point,” she said.

She got updates from friends in Milan that the city was becoming more and more like a ghost town.

By Feb. 28, the number of people in Italy with coronavirus had spiked to 800.

“We found out that school will be online,” Arora said. “And then we were just confused as to what we should do.”

Arora said she initially still hoped she could return to Milan and participate in the online courses there, but then flights in and out of the city began to close and she was urged by both her parents and UMass Lowell to come home.

She arrived back in the states on March 4, and has been self-isolating, following the guidance from the UMass and the CDC for returning from travel to a country where there is widespread community transmission of coronavirus.

When school resumes, she will take her Italy classes online, with the exception of the lessons that were dependent on being on-location in Milan or in-person.

The daily change to how study abroad programs were functioning because of the outbreak in Europe wasn’t unique to students in Italy.

Emerson student Leah Jablo planned to spend spring break in Italy, traveling from the Netherlands where she was spending a semester at the college’s Kasteel Well program. But in mid-February, she and her classmates were advised to cancel travel to the country.

“You don’t know what any given city is going to look like day-to-day,” Jablo said in a recent interview from the Netherlands. “I think that’s what they’re afraid of, especially with Europe’s open borders policy — that anyone can carry the disease via train at any time. Also the fact that it takes two weeks to show symptoms. You don’t really know what a city looks like until it’s a little bit too late.” 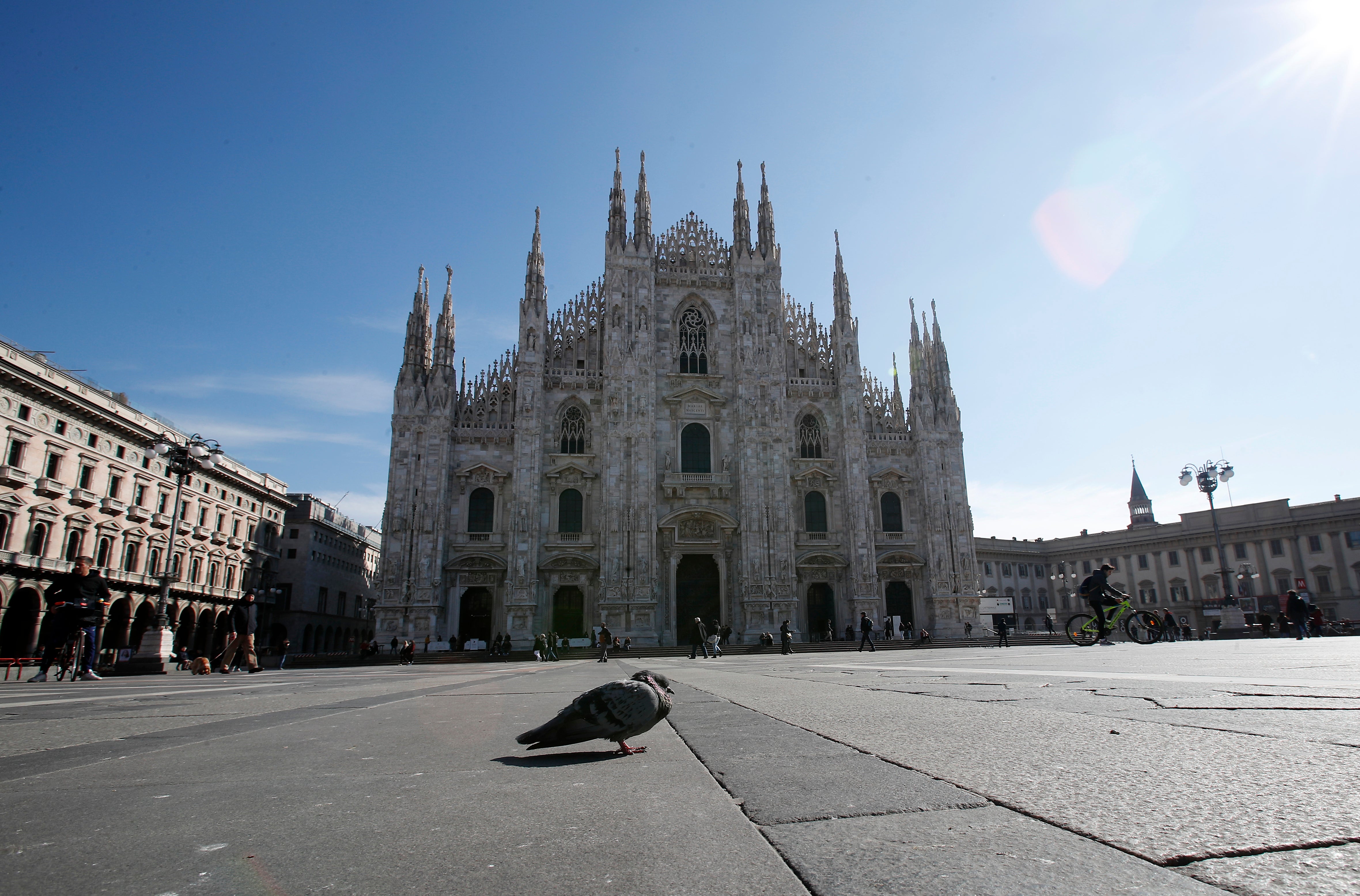 The 20-year-old sophomore said she still hoped to travel locally. But on March 2, Emerson announced it was suspending the program in the Netherlands and would bring the students studying in Kasteel Well back to the Boston campus.

“It’s just definitely really shocking,” she said. “I would have expected us to at least finish the semester here, even if they put a ban on travel.”

She said she wishes she could stay, but understood the concerns of the college, given the unknowns around the coronavirus and how quickly it spread.

“I do think traveling here in the Netherlands isn’t necessarily more unsafe than traveling around in California, in the states,” Jablo said. “I think that it’s definitely scary, but I think that we’re not necessarily less safe here than I would be at home. So I’m not very anxious to get home necessarily.”

While students waited to have travel booked back to U.S., they were told not to leave Well, she said. Students in the program will continue online classes when back in Boston with the Kasteel Well teachers.

“I definitely wish this experience played out differently than it did,” Jablo said. “Because I truly enjoy being here, and it definitely isn’t an experience that’s going to come around again. So everyone’s obviously bummed about that. But I’m just glad I was here while I was able to be and that I was still able to travel a little bit, even if not to all the places I originally wanted to … I feel satisfied with what I accomplished for sure.”

Days after speaking with Boston.com, Jablo arrived back in the U.S., where an increasing number of colleges, including Harvard and Amherst, are moving all classes online to prevent the spread of the virus.

Arora said she learned a lot from the experience and doesn’t feel like she lost anything with the end of her program abroad.

“It really taught me that sometimes you have to live in the moment and not overwork yourself [over] something in the future because the future is so uncertain,” Arora said. “I guess that’s why I’m not super upset about leaving the study abroad, because I feel like this is about something much greater than me. This just shows how crazy life can be, and if I just keep living in the past, it’s not useful. So I’m just focusing on the present.”

How has coronavirus impacted you?