Lawmakers and officials in Massachusetts are calling for measures to prevent housing evictions as COVID-19 spreads in the region.

The Boston Housing Authority notified the state Housing Court Thursday that it will not pursue “non-essential eviction actions” for as long as Gov. Charlie Baker’s declared state of emergency lasts.

Non-essential cases are defined as “non-payment and cause cases that do not involve or include allegations of criminal activity or lease violations that impact the health or safety of BHA residents and employees and/or the general public,” Administrator Kate Bennett wrote in a letter to court officials.

Over 58,000 residents in and around Boston receive affordable housing through the agency.

“BHA takes these unprecedented actions and submits these extraordinary requests in response to the current public health emergency,” Bennett wrote. “We do so in an effort to safeguard the health and safety of BHA residents and our employees involved with BHA’s eviction actions. We believe these steps will help mitigate the potential transmission of the virus by reducing the number of in-person interactions in the Housing Court.”

Bennett said BHA is requesting the court to “allow the agency’s future requests for reasonable continuances with respect to any scheduled trial or hearings relating to non-essential cases.”

Mayor Marty Walsh, in his own statement Thursday, asked for the court system to “offer leniency” to residents facing non-essential evictions, The Boston Globe reports.

“As we continue our focus on ensuring residents are safe and healthy from the spread of coronavirus, it’s critical that we minimize disruptions that could have a negative impact on their well-being and ability to protect themselves during this challenging time,” Walsh said.

COVID-19 cases in Massachusetts rose to 123 late Friday afternoon, including a total of 26 in Suffolk County, according to the state Department of Public Health.

The call for a moratorium also grew from Boston City Hall to Washington, D.C., Friday, as both city and federal officials pushed for a pause in proceedings.

Boston City Councilor Lydia Edwards wrote to Baker and the state Housing Court in support of a moratorium Thursday, citing the need to “limit public exposure, protect vulnerable residents, prevent dangerous overcrowding in city shelters, and ensure parties in eviction proceedings have full access to legal services that may be suspended or inaccessible due to changes in state, city, nonprofit, and university operations.”

She asked the court to issue continuances in ongoing cases until the state of emergency lifts and to “vacate default judgments from March 10th onward.” She said cases should proceed, however, in instances where a landlord can show “imminent action is necessary in spite of the emergency.”

“Please act expediently to protect the health and welfare of residents and ensure access to legal services for parties in the Housing Court,” Edwards wrote.

In light of the #COVID19 public health emergency, I am urging @MassGovernor and Chief Justice Sullivan to issue a moratorium on eviction proceedings. #bospoli #mapoli pic.twitter.com/gUrMWLCByt

On Beacon Hill, state Rep. Mike Connolly, of Cambridge, and Boston Rep. Kevin Honan, House chairman of the Joint Committee on Housing, filed a bill to pause evictions and foreclosures across the state until Baker’s state of emergency concludes.

Under the bill, courts overseeing eviction processes would be banned from entering a judgment; issuing an execution for possession of a unit; accepting filing of a complaint, summons, or writ; and denying a stay of execution or a continuance of a case as requested by a defendant, among other measures.

Creditors and mortgagees would be barred from carrying out foreclosures, from publishing notice of a foreclosure sale to evicting tenants, according to the proposal. Violators would face a $5,000 fine, six months in jail, or both.

“Threats to public health disproportionately impact our most vulnerable residents,” Honan wrote in a tweet. “This is a key component of our overall health & safety.”

Noting that many residents in the city live paycheck to paycheck, he said the measure is needed to protect residents who could lose wages as COVID-19 rages on.

Renters would have to show a loss of income; must tell landlords before or on the day rent is due that they are unable to pay; and make “a good faith effort to pay any portion of rent that they are able with their reduced income,” officials said.

However, Rivera said in a press release that the resolution also protects landlords and includes a clause requiring tenants to pay any back-owed rent within 120 days after the moratorium.

“In Lawrence many, if not, most residents live paycheck to paycheck, this will protect the most vulnerable (population) in our city if they experience income loss at the hands of this pandemic!,” Rivera said in a tweet. “No worrying about the rent while we worry about the virus!”

EVICTION MORATORIUM: In Lawrence many, if not, most residents live paycheck to paycheck, this will protect the most vulnerable pop in our city if they experience income loss at the hands of this pandemic! #CorronaVirus No worrying about the rent while we worry about the virus! pic.twitter.com/tROpyc76dh

The resolution requires a city council vote to be enacted.

Their letter also included a requests for other tenant safeguards, including asking the Department of Housing and Urban Development to mandate that Public Housing Authorities halt evictions in federally-assisted housing.

Moratoriums like this have been used following floods, hurricanes, and tornadoes, the senators wrote. The measure is needed now to protect workers “who have already seen or will soon experience an unexpected and significant drop in income” as part of the fallout from COVID-19, they said.

“While our nation has achieved gains in homeownership and housing stability over the last decade, all of this progress will be in grave jeopardy if you do not immediately act to implement a nationwide moratorium on foreclosures and evictions,” the letter said.

The last thing struggling workers should have to worry about during the coronavirus outbreak is falling behind on their rent or mortgage & losing their home. @SenJeffMerkley & I are calling for a national moratorium on evictions & foreclosures. https://t.co/2bOmZ6EgYy pic.twitter.com/YlwPdGWiOm

“We must suspend mortgage payments and evictions nationwide,” he wrote in a tweet Thursday night. “And we must guarantee rental assistance to all who need it.” 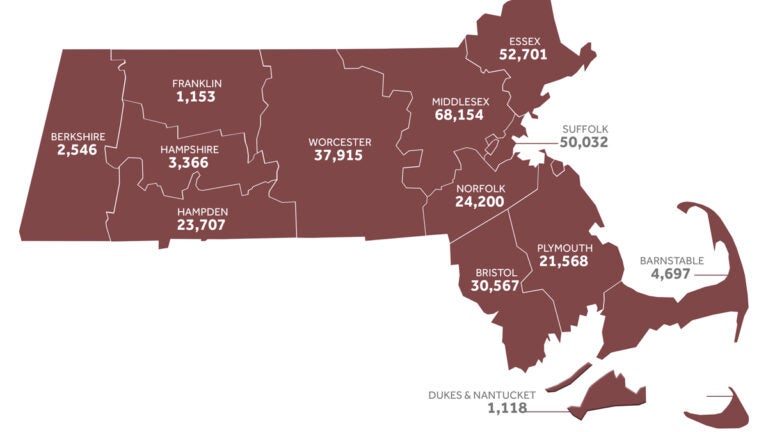 Maps: Here’s where coronavirus cases are reported in Massachusetts