Massachusetts public officials say efforts to ramp up testing for the novel coronavirus are ongoing, as the number of COVID-19 cases continues to rise. But the state is also looking to increase its abilities to trace the virus — a step experts say is crucial to preventing onward transmission of the coronavirus.

Marylou Sudders, the state’s Secretary of Health and Human Services, said at a press conference this week that there is an effort underway to put together a group of people to “augment” the tracing the state is doing “in support with the local boards of public health.”

“There was a call with the deans of the schools of public health in Massachusetts to see if we can use their students — they’re not in school — and others that are engaged with the public health community to help us to do tracing,” Sudders said. “That’s one. Two, we’re talking to the deans of medical schools who now have their residents coming in — they don’t actually start their rotations till June — to help augment that with us.”

On Thursday, the Boston University School of Medicine announced that it, along with the three other schools of medicine in the state, will graduate students early, which will allow fourth year medical students to join doctors fighting the pandemic up to eight weeks earlier than projected.

The state is also working to bring in a corps of public health nurses to help.

“Testing, tracing, isolation and recovery is really the core of this,” Sudders said of the efforts to battle COVID-19.

Gov. Charlie Baker pointed to other parts of the world where aggressive contact tracing, coupled with testing and social distancing, have worked to push back against the virus.

David Hamer, an infectious disease doctor at Boston Medical Center and professor of Global Health and Medicine at Boston University Schools of Public Health and Medicine, said contact tracing has been “fairly standard procedure” in different outbreaks, such as for Ebola and pulmonary tuberculosis, to identify people who may have been exposed.

“If done well it can help identify infected people and prevent onward transmission, which is the overall goal, and hopefully it can be done well here so we can help Massachusetts,” Hamer said.

How does it work?

The way contact tracing basically works, Hamer explained, is that when somebody is diagnosed or confirmed to be infected, a complete history is taken from them of all the people they have been in touch with over the incubation period for the infection. For coronavirus, that would be 14 days.

“It’s important because that way, by reaching out to and contacting and then making the decision to test those people, more people who are infected in the community can be identified,” Hamer said.

What happens after people are identified remains a question, he said, pointing out that different countries have handled that stage differently. In Singapore, where intensive contact tracing has taken place, a person who is identified to be infected with the virus is hospitalized and put in respiratory isolation, so they do not continue to infect family members or other close contacts.

“We aren’t able to do that,” Hamer said. “So one of the questions is going to be what the state does with the information. I think they’ll be able to identify more people who are potentially infected or that are definitely infected.”

But unless there’s a substantial capacity or availability of beds, it would be difficult to put everyone with the virus into isolation the way other countries have done, he said.

Hamer said he suspects the volume of COVID-19 cases in Massachusetts has hampered the state’s ability to quickly implement aggressive contact tracing, and he applauded the possibility that medical and public health students be pulled in to help.

“If you were to go back six months, Massachusetts has a really good program for tuberculosis that includes trying to identify family members or other potential contacts of people who have been diagnosed with tuberculosis,” Hamer said. “So Massachusetts has good experience doing this. It’s just that I think the volume of this is a whole other scale, so I think one challenge is just the large volume of infected people.”

Delays between when someone is evaluated at a testing center and when the results come back to confirm COVID-19 are another challenge.

“Third is getting a history of all of their contacts,” the infectious disease doctor said. “It’s having to do outreach to them and then taking history about who they’ve been in touch with, through work, through school, through home, through socializing. And then, having to get contact information for all those people to then reach out and contact them. And then getting them in for testing, making sure tests are available. So there are multiple logistic challenges.”

During Monday’s press conference, Sudders and Baker said they envision the ramped-up tracing taking place over the phone.

Hamer said if robust contact tracing could happen immediately in Massachusetts, it could make a difference in flattening the curve. But it will require a “good sized team and very good coordination.”

As it is, he’s concerned about where things are headed.

“I think that we’re at the beginning of an epidemic curve that’s going to go up very quickly,” he said.

The existing shortages of protective equipment and supplies at many hospitals is already greatly concerning, he said.

“I think it’s only going to get worse,” Hamer said. “And the thing is that if we run out of protective equipment, or don’t have enough of it — and many places are already having to change their policies to reuse things and so forth — that there’s a risk of healthcare workers becoming infected. And if we lose a lot of healthcare workers, we have fewer people to manage the patients that are in the hospital at a time when we need them even more.”

Hamer urged Massachusetts residents to follow the guidance of state officials — staying inside and avoiding contact with other people as much as possible.

“Then we need to get on top of testing and identifying those who are already infected,” he said. “And beginning the contact tracing is a really key part of that process.” 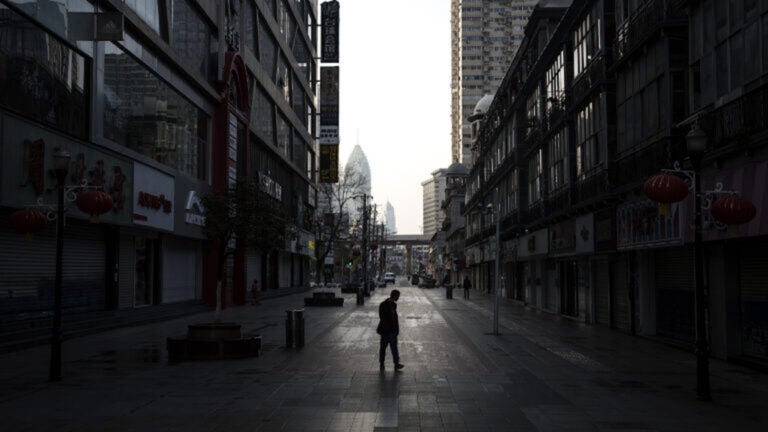