Standing in front of the Patriots plane that had just delivered 1 million N95 masks from China, Gov. Charlie Baker had to pause in his remarks Thursday evening, overcome with emotion.

The moment of feeling came as the Massachusetts governor began to thank the Kraft family for their help in delivering the personal protective equipment desperately needed by medical professionals and first responders in the fight against COVID-19.

NEW: Massachusetts Gov. Charlie Baker becomes emotional while thanking the Kraft family for helping to pay for and transport more than a million N95 masks from China to the U.S.#WBZ #coronavirus #PPE pic.twitter.com/D4aFp70zc9

On Friday, Baker explained why he had that reaction.

“We have been chasing personal protective equipment and especially N95 masks basically as much as we’ve been awake for the past few weeks,” the governor said, citing the challenges in obtaining orders of the supplies.

Massachusetts had ordered a shipment of 3 million masks from BJ’s, which were “lost” in the Port of New York, he reiterated. The governor said Friday he assumes those masks were confiscated and put in the federal stockpile. Marylou Sudders, the state’s health and human services secretary, has said they were impounded by the federal government on March 18.

Baker said on a day-to-day basis he has never known whether deliveries of equipment were ever going to come through, which has been frustrating given the undeniable need for supplies.

The fear of everyone working on the front lines, he said, is not for themselves, but of infecting their loved ones.

“I was grateful that we were able to do something for this community that we should all be enormously grateful for,” he added.

Baker said it was “killing” him that he couldn’t solve the equipment shortage.

“So yeah, I got a little worked up about it,” he said. “But honestly if you’ve had the kinds of conversations we’ve had, you know exactly what I’m talking about and why it’s so important that we were able to actually do something for them.”

Getting the shipment of masks from China and a system in Somerville that will be able to disinfect thousands of N95 masks daily for reuse has made the governor feel like he’s able to offer some relief.

“You start to feel like you’re creating a little bit of a comfort for a lot of people who have been uncomfortable and who yet have gone out every single day and done what they do for the rest of us, and we should remember that,” Baker said.

Watch his full response, below: 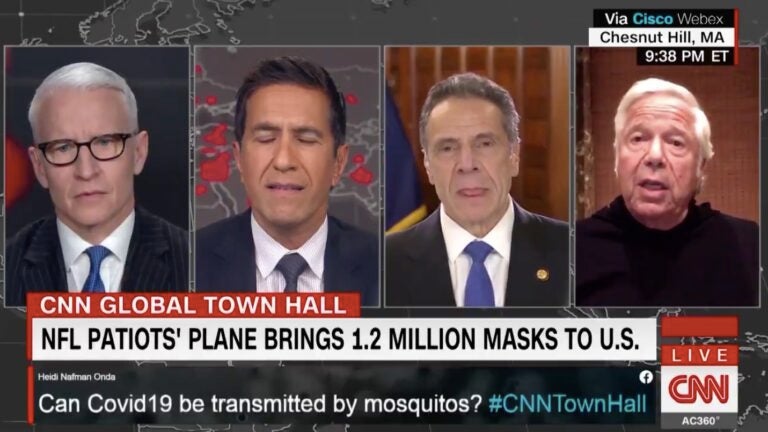 Robert Kraft: ‘It’s time for us to rally together and solve these kinds of issues’