Medical workers are expressing concerns about using some of the masks that were delivered from China on the Patriots plane earlier this month, The Boston Globe reports.

The shipment of more than a million protective face coverings, which Gov. Charlie Baker hailed as “critical” in the state’s fight against COVID-19, contained standard N95 masks, which are approved and recommended for use by health care workers by the Centers for Disease Control and Prevention, the National Institute for Occupational Safety and Health, and the U.S. Food and Drug Administration.

But, according to the Globe, the shipment also contained KN95 masks, a version of the N95 that is regulated by the Chinese government. In early April, the FDA issued an emergency order to authorize use of the KN95, even though they are not NIOSH-approved, if certain criteria are met, including that they are demonstrated to meet certain standards and it’s ensured they were not fraudulently produced. The CDC says KN95 masks are a suitable alternative if N95s are not available.

“It is not the gold standard,” Maryanne Bombaugh, president of the Massachusetts Medical Society, told the Globe of concerns about the KN95s. “We know the N95 masks. We know how well they work, and what they filter, and the safety profile around them.”

The KN95s reportedly work similarly, but there are some differences such as how much pressure the masks can withstand as the person inhales and exhales, The New York Times reports.

Ann Scales, a spokeswoman for the Massachusetts Department of Public health, told the Globe that the masks, both N95 and KN95, carried by the Patriots plane were “inspected upon arrival and are authorized by the FDA for health care workers.”

Asked about the KN95 masks on Monday at a press conference, the governor said his administration “worked very hard” to get masks shipped to the commonwealth given the need on the front lines for the protective equipment.

“All those masks are FDA-approved, all of them were inspected,” Baker said of the masks ferried by the Patriots plane.

Like the N95s in the shipment, the KN95s went to “hospitals, nursing homes, and other health care providers,” the governor said.

“We’re grateful for everybody who was involved in that effort,” he said.

Shuhan He, an emergency medicine doctor at Massachusetts General Hospital and co-founder of GetUsPPE, told the newspaper that while he believes the masks are similar and would use the KN95 for personal use, he would not be comfortable wearing it in a hospital.

Officials at Mass General told the Globe that KN95 masks are not in use at the hospital. Jeremy Lechan, a spokesman for Tufts Medical Center, said the hospital has received 2,000 KN95 masks from the Patriots plane shipment but they are not yet in use.

“We are assessing the masks, and determining how best to utilize them moving forward,” he told the newspaper. 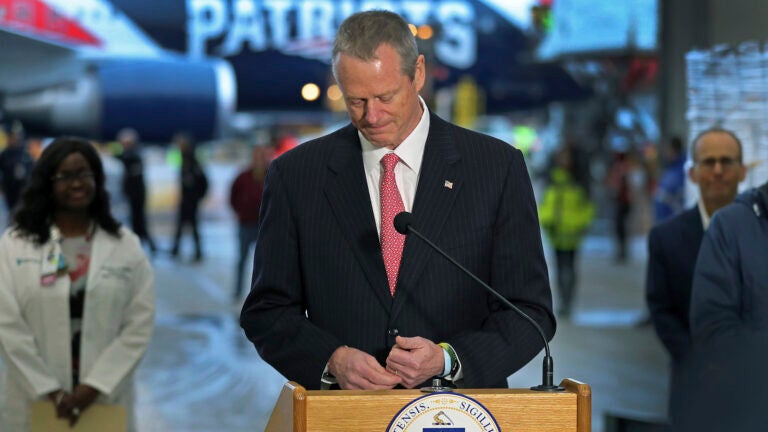