Tens of thousands of people lost power and numerous trees toppled onto power lines, homes, garages, and cars as severe winds swept through the state Monday.

Eversource, a regional energy delivery company, said in a tweet that hundreds of crews worked around the clock to restore power to over 77,000 customers. Officials noted they were working as quickly and as safely as possible under their COVID-19 pandemic plan.

Crews continue to respond to damage caused by the strong winds & have restored power to over 77,000 customers since the ⛈️ began. While operating under COVID-19 pandemic plan, we’ll continue to work as quickly & safely as possible until all affected customers have been restored. pic.twitter.com/CgyKdBrF8t

Hundreds of crews working around the clock to restore power as quickly and safely as we can to our remaining ~12,000 customers in Eastern MA while operating under our COVID-19 pandemic plan. Restoration times by town are available here 👉 https://t.co/bmOtOLHYSA pic.twitter.com/u33LnB4mP9

National Grid said some wind gusts peaked above 75 mph, and crews were working with state and municipal leaders on a coordinated multi-day response effort.

As of Tuesday afternoon, 23,374 customers were still without power, according to the Massachusetts Emergency Management Agency.

Avoid downed lines, check on neighbors, & use generators outside away from buildings.

In Hanover, one fallen tree split an 80-year-old woman’s garage in half, 7News reported.

“That was a big tree, which I’ve been trying to get down, but it was so expensive, I couldn’t afford to get it down,” Mary Thorne, who was just feet away when the tree crashed, told the station. “But the Lord took it down for me.”

Tree limbs also fell onto a passing car at Suffolk and Wyman streets in Medford, though officials said no injuries were reported.

This windy day has brought down tree limbs all throughout the city. This limb fell onto a passing car at Suffolk St and Wyman St. The occupant of the vehicle was unharmed. pic.twitter.com/bExCCelKvs

As people were recovering and cleaning up after the storm, Boston firefighters reminded them to use caution.

“There are power lines down all around,” firefighters said in a tweet, noting that police, state troopers, and Boston Public Works employees were working hard to clear the streets and keep people safe. “Please have patience.” 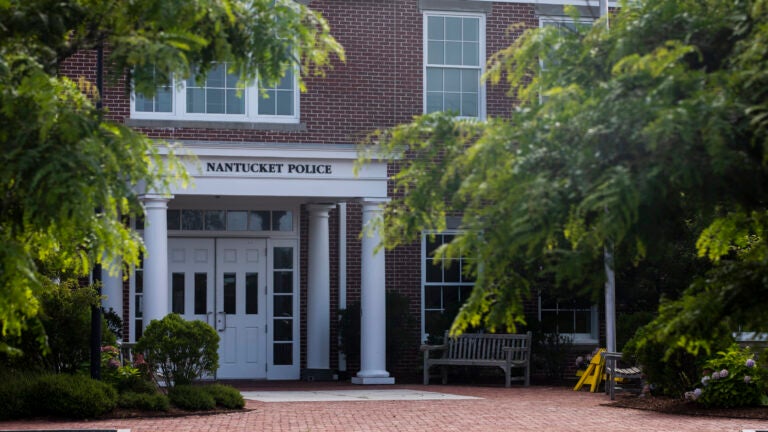