Asymptomatic patients are posing a challenge for Boston’s homeless shelters, with the city jumping from having only a handful of confirmed COVID-19 cases to about 150 a couple weeks ago, when testing started in earnest.

As of Monday morning, 240 homeless residents in Boston have tested positive for COVID-19, representing about 25 percent of the total population, according to city data.

That’s roughly 40 more cases than city officials announced last week. No fatalities have been reported. Not even a month ago, officials for Boston’s homeless population said there weren’t any confirmed cases yet.

“We went from almost no one to a huge influx of COVID-positive people, with the really interesting twist that most of them were asymptomatic, they did not have symptoms,” Jim O’Connell, president of Boston Health Care for the Homeless, said in a recent interview with Boston.com.

O’Connell attributed the rise in cases to testing availability. He said there were just a handful of cases at one of the shelters at the time, and the state gave permission to have everyone staying there tested. Roughly 140 to 150 tested positive.

The rise in cases among Boston’s homeless population mirrors the increase of those testing positive for the virus across the state. On Wednesday, 1,755 new cases were reported overall for the state, and about 2,500 are predicted per day during the projected surge – April 10-20.

Since cases of COVID-19 began to ramp up, new precautions are being taken to help not only care for one of the city’s most vulnerable populations, but to also help them spread out to reduce the possibility of transmission.

Depending on how sick a homeless individual is with COVID-19, they’re sent to the proper facility for the level of care they need, O’Connell said.

Like anyone else, if a homeless individual needs acute care, they’re sent to the hospital, according to O’Connell.

For those who are sick and need monitoring by a health care worker, but are not severely ill, they’re brought to the Barbara McInnis House at 780 Albany St. Typically used for “medical respite” for the homeless, the facility has a wing set up for just COVID-19 patients. The organization also is using the former Kindred Hospital at 1515 Commonwealth Ave. in Brighton, which is empty and undergoing a condo conversion, to house homeless people with COVID-19. That required gaining approval from city officials, O’Connell said.

A message from our founder and president Dr. Jim O’Connell: “From my seat in front of Zoom most days, I witness a…

Posted by Boston Health Care for the Homeless Program on Wednesday, April 1, 2020

For those who show symptoms, or may have been exposed and need to be quarantined, there are tents set up in two locations – Boston Health Care for the Homeless adjacent to the Woods-Mullen Shelter for women at 794 Massachusetts Ave., plus next to the 112 Southampton shelter for men, the organization noted.

In addition, the now-open Boston Hope Medical Center has 500 beds for homeless individuals, and 500 additional beds for non-critical COVID-19 patients. The facility opened on Friday.

“The goal of Boston Hope is to deliver care to patients that do not require hospitalization in an acute care facility,” a news release said.

The new facility was a joint effort between Partners HealthCare, Boston Health Care for the Homeless, and the offices of Gov. Charlie Baker and Boston Mayor Marty Walsh.

“As a city, we’re focused on protecting our fellow Bostonians, especially the most vulnerable among us,” Walsh said in a statement.

O’Connell said the beds for homeless patients at Boston Helps will be used for people who have symptoms, but don’t need constant monitoring.

“They would be home if they had a home,” he said.

At least 172 beds are being offered up by Suffolk University in addition to Boston’s existing shelter capacity, according to Pine Street Inn, which operates multiple shelters, and provides services to the city’s homeless population.

“We’re getting ready for the worst and trying to understand how much of this virus can be spread by people who have no symptoms and don’t even know they’re sick,” O’Connell said. “That’s the question of the hour now.”

At its existing shelters, Pine Street Inn has taken extra precautions with managing its guests. This includes ensuring they stay in the same bed each night, providing meals in shifts to allow some distance, and putting up plastic curtains in between each bed.

To help those who work with the homeless, Boston University has opened one of its empty dormitories at its Fenway Campus for 75 of Pine Street Inn’s employees to stay at.

“In some cases, [staffers] are working double shifts and need a place to stay,” Lyndia Downie, the organization’s president and executive director, told BU Today. “We also have some who have long commutes, and this will reduce their commute time. The staff will come from programs and housing all over the city — the South End, Jamaica Plain, Dorchester.” 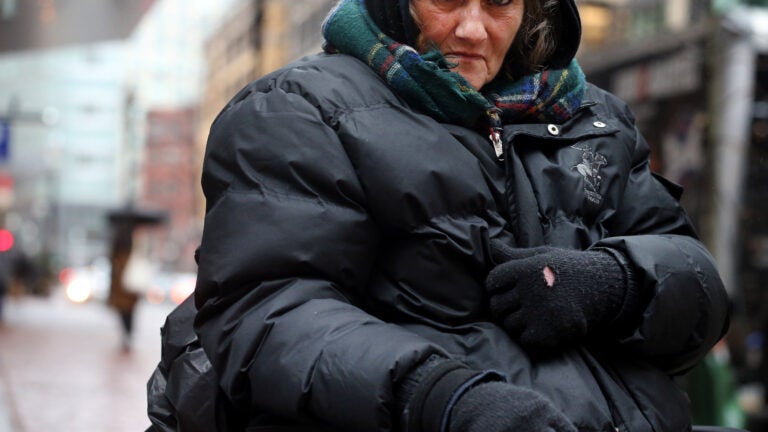