The state has released a new strategy to help with homelessness throughout the COVID-19 outbreak.

Among the measures, the state now has five “isolation and recovery sites” for homeless people that need a place to recover from COVID-19, according to a news release from Gov. Charlie Baker’s office.

The announcement comes after Boston saw a spike in asymptomatic cases a few weeks ago. Those who tested positive at one of the shelters had made it through the facility’s strict COVID-19 pre-screening process. Jim O’Connell, president of Boston Health Care for the Homeless, said the discovery of a few cases granted officials the opportunity to test everyone in the shelter. There were between 140 and 150 positive cases.

As of last Monday, about 240 homeless people in Boston had tested positive for COVID-19, city officials had said.

To help curb the spread among one of the state’s most vulnerable populations, the five isolation and recovery sites have 550 beds and are spread across the state – there’s one each in Lexington, Everett, Taunton, Pittsfield, and Northampton. These sites are in addition to the 500 beds at Boston Hope field hospital, which is inside the Boston Convention and Exhibition Center, and the Newton Pavilion, which together have 732 beds.

The state is also working to ensure that supplies make it to homeless shelters and municipal quarantine sites for homeless people more quickly. The supplies include things like tents, beds and portable showers, the release says. Along with supplies, the state is also attempting to make sure personal protective equipment, like masks and gloves, make it to homeless shelters more quickly.

The Federal Emergency Management Agency, or FEMA, has promised to reimburse cities and towns, as well as nonprofits, at 75 percent of costs associated with operating isolation sites, according to the release.

The announcement of additional help for caring for the homeless comes with the state’s promise of additional money for foster parents, and help for shelters housing families and domestic violence victims. 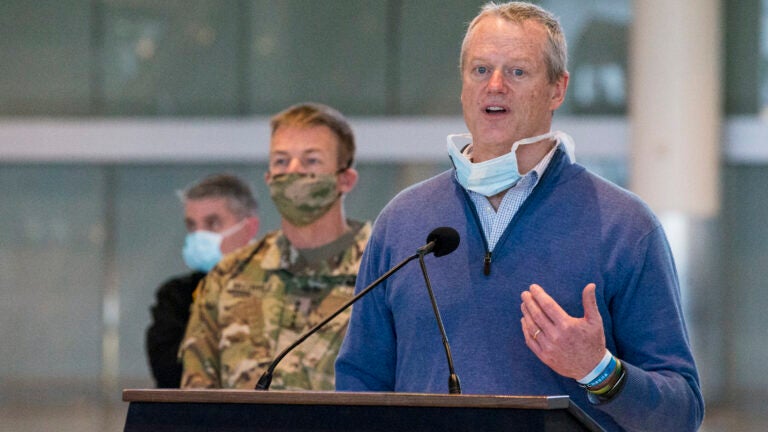 ‘This is a very different kind of battle’: Gov. Baker detailed the state’s response to COVID-19 vs. other tragedies